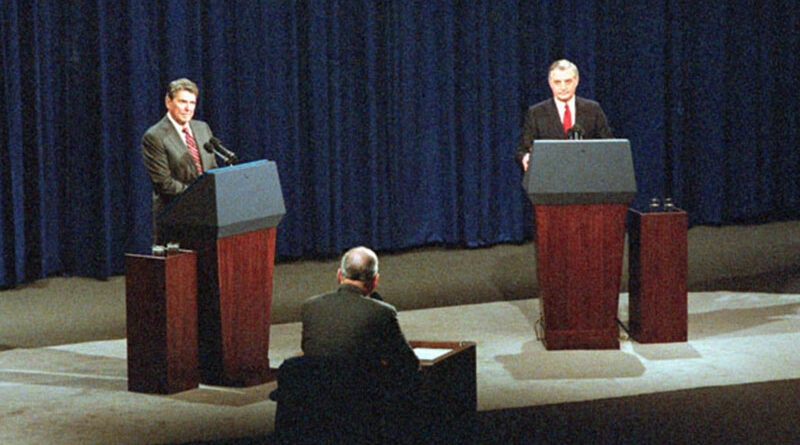 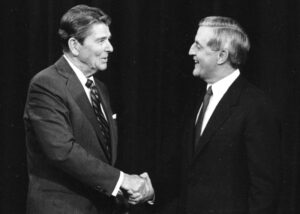 The president’s age had again burst into the spotlight. He was, after all, the oldest president in history and, in a previous debate, under the unforgiving glare of the cameras, he had appeared confused and stumbled over his words.

It was October 1984 and President Ronald Reagan was in his second debate with former Vice President Walter Mondale. A moderator referenced Reagan’s age and pointed out that President Kennedy was forced to go for days on end with little sleep during the Cuban missile crisis. Was there any doubt in Reagan’s mind that he could function under similar circumstances?

“Not at all, Mr. Trewhitt, and I want you to know that also I will not make age an issue of this campaign,” said Reagan, with a note of sarcasm. “I am not going to exploit, for political purposes, my opponent’s youth and inexperience.”

The auditorium erupted into laughter and applause. Even Mondale, in his mid-50s, could not help chuckling. Reagan won reelection in a landslide.

As the 2020 presidential election grinds toward a conclusion, age has again become an issue. This time, however, both President Donald Trump and his challenger, former Vice President Joe Biden, are well into their ‘70s. Either man would be the oldest president in history and both have made repeated gaffes and verbal slipups that critics pounced on as possible evidence of age-related problems.

Whether a president’s age should matter is a difficult question to answer in part because aging is not one size fits all.

“It’s a complex combination of gains and losses and things that are stable,” says Jennifer Sasser, a gerontologist who has studied aging for three decades. “It’s not a yes or no question.”

As people grow older, their individual differences increase, which helps explain why there are 90-year-olds running marathons and 60-year-olds in poor health. Other factors such as gender, race, class and education also shape our life chances as we age, says Sasser, who teaches at Portland Community College and is the co-author of a widely used textbook on aging, “Aging: Concepts and Controversies.”

While the right 90-year-old might well be physically and mentally fit enough to handle the rigors of the presidency, the process of aging inevitably takes a toll on the body. By the time the average person reaches advanced age, they are likely to have less energy, less reserve capacity, less stamina and possibly be suffering from chronic diseases, Sasser says.

“And all of these things just make you more vulnerable,” she says.

An obvious benefit to an older president is having decades more life experience to draw upon, Sasser says, but if that experience is not in a relevant area like government, it may not prove helpful. Trump entered office as the first president in history with no significant prior experience in politics or the military.

Part of the problem with questions of age and the presidency is that, whatever their legitimate concerns, both major political parties have weaponized age, says S. Jay Olshansky, an aging researcher at the University of Illinois at Chicago.

Olshansky wrote a paper in 2011 on presidential lifespans after hearing a physician on television say that typical presidents aged two years for every year in office. Though there has long been speculation that presidents experience accelerated aging while in office, Olshansky decided to do the research to determine whether or not presidents live longer or shorter than average.

The study found no evidence that presidents die sooner, on average, than other men. In fact, 23 of the 34 presidents who died of natural causes lived past the average life expectancy for men of the same age, even if they hypothetically aged at twice the normal rate while in office.

The reason for presidential longevity is not a mystery, Olshansky says.

“There’s lots of factors that influence projected health and duration of life,” he says. “We know what those are. They’ve been measured definitively for the last 50 years.”

Among the factors are education, access to quality healthcare and wealth. All but 10 presidents had considerable wealth, college educations and access to the best medical care of their day, Olshansky says.

But what about presidents appearing to age rapidly? Abraham Lincoln looked decades older in 1865 than when he took office. Olshansky says graying hair and wrinkling skin are normal parts of aging and would be obvious in any middle-aged man when comparing portraits taken eight years apart. Smoking or stress can accelerate the appearance of aging.

Americans continue to raise questions about age and the presidency in part because more people are living longer, Sasser says.

Baby boomers in particular represent a huge swath of the country that is entering later life. Members of that generation have long pondered how they were going to face growing older, she says, which inevitably raises questions about how well an older American can handle the duties of president.

While the issue is not new, the intensity of the scrutiny has changed dramatically, says Meena Bose, director of Hofstra University’s Kalikow Center for the Study of the American Presidency.

Dwight Eisenhower was the oldest elected president when he took office. But his personal popularity with the American people and his international standing from leading the allies in WW II largely overshadowed questions about his age. Eisenhower had a heart attack and a stroke and suffered other health problems during his presidency. Reagan faced questions about his age, but largely managed to brush them aside with self-deprecating one-liners and by evoking the image of a cowboy during horse rides on his ranch. Reagan was diagnosed with Alzheimer’s several years after leaving office.

“But you didn’t have the constant scrutiny that we have today,” Bose says. “Of course, there have been questions about age raised, but not to the extent that they have been raised in 2020.”

With the rise in the 1990s of the 24-hour news cycle and cable news networks, the intensity of media coverage on every minute aspect of presidential candidates’ lives skyrocketed.

Eisenhower and Reagan, for example, would almost certainly receive far more scrutiny today regarding their age and health, Bose says.

“Age and questions about health are part of that larger assessment of how we evaluate presidential candidates,” she says. “When we look at the qualities that are needed in the presidency in the 21st century for governance — political skill, communication, vision — I think voters need to consider age as they evaluate candidates.”

The challenge, Bose and Olshansky concede, is that the Constitution includes just one age-related requirement for candidates: the president must be at least 35 years old.

One of the questions that frequently comes up when discussing presidential candidates is whether or not they should be required to go through a standardized medical exam that includes physical and cognitive functioning tests.

The risk of having physical and cognitive problems may be higher later in life, Olshansky says, but the risk is present at every age.

Bose says it is highly unlikely that any kind of mental or physical fitness tests will be adopted for presidential candidates in the foreseeable future in large part because the Constitution leaves the ultimate decision of fitness for office with the voters.

Making that decision is no easy task. It takes trained professionals with patient records and the patient to diagnose many physical and mental problems. And while it has increasingly become the norm for candidates to release all or part of their medical records, there is no requirement. Trump repeatedly promised to release his medical records, but never followed through.

“The voters are left with making assessments based on the information they have,” Bose says.

With both candidates in their 70s, and the pandemic depriving the election of the rigorous in-person campaigning typical of presidential races, voters may be forced to scrutinize the candidates’ every verbal gaffe and physical misstep for clues, Bose says.

“When is that something that could happen to anybody and when is it indicative of something more serious?”

Photo: President Ronald Reagan in his second debate with former Vice President Walter Mondale in October 1984. The issue of old age was brought up by the moderator.