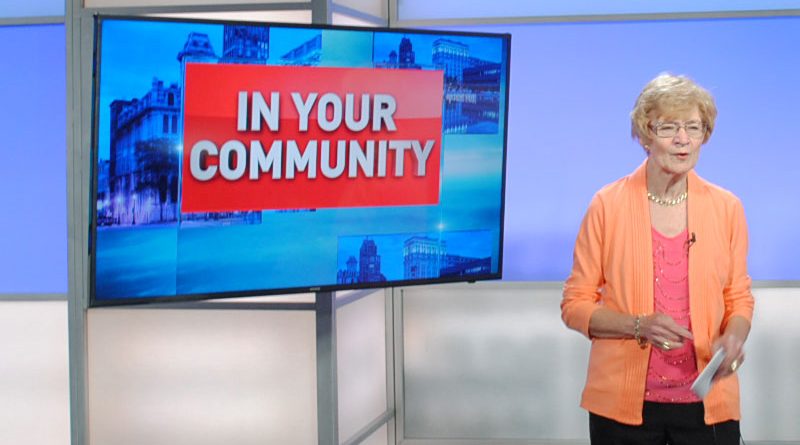 Local news icon Laura Hand gave an interview to 55 Plus magazine in 2016, during which she told writer Aaron Gifford that she planned to retire “someday. But it won’t be tomorrow.”

After a career that spanned five decades, Hand signed off the air after 47 years in the studios that had been her television home. She has told people’s stories and kept Central New Yorkers informed of news from around the corner and around the globe. Several weeks before she was due to leave, Hand shared some of thoughts on her career, changes in the industry, and her post-retirement plans.

Since first coming to the Channel 3 studios on James Street in 1972, Hand had been what she called “talking to people and telling their stories. It’s fun for me to be able to see what they do, but I think it’s also important for the community to know what they do and why what they do should be important to all of us.”

She added, “I think everyone can make a difference. My job is letting people know.”

Hand, too, has made a big difference not only in local broadcasting but in the community as well through her work with a variety of nonprofits.

For example, she’s been on the board of the Salvation Army, had served on the board of Hope for Bereaved and helped to establish its Butterfly Garden of HOPE on Onondaga Lake Parkway in Liverpool.

She’s involved with Oasis Syracuse, as well as reading programs for pre-K-aged children. Together with her therapy dog, a Pomeranian mix named Musetta, or “Moose” for short, she is fostering in youngsters a love for both reading and animals. The pair visits libraries, like the Onondaga Free Library on Onondaga Hill. She plans to expand on that by adding the Salvation Army and Vincent House to her schedule.

“A dog is an incredible door-opener. It’s a calming influence,” she said, adding that she also hopes children can also learn from “Moose” how to handle a dog, and animals in general.

“I’ve been around horses my whole life. It is my personal therapy,” she said. “When you ride, you can’t be thinking about what you’ve left behind in the office. You have to really concentrate, or you get into trouble. It’s a great mind cleanser to be out in nature.”

She also plans to pursue more earnestly another one of her passions — gardening at her north side home. She is also looking forward to sleeping in on weekends.

As the anchor on “Weekend Today” in Central New York on Saturday and Sunday mornings, she has had to get up at 2:30 a.m. on weekends, something she won’t miss, she admitted, with a chuckle. But what she will miss are the people she works with, not just her co-workers at the station, but the people she frequently deals with from the area, and the opportunity to share information about various events going on in the region.

“There is so much to do in this community,” she said. “So many people give their time to make those events possible. It’s been my privilege, truly my privilege, to help publicize what they do and maybe get a few more people involved in their organizations.”

Hand has always been interested in journalism and politics. She was inspired by Nancy Dickerson, the first woman to be a reporter at CBS, and like her role model, Hand would become the first woman in some of the newsrooms in Central New York.

“I got into the business because of Nancy Dickerson. I watched her cover political conventions and I said, ‘Wow, if she can do it, I can do it,’” she recalled.

That determination fueled her years at Syracuse University and her foray into broadcasting.

It was the late 1960s and early 1970s. There was a great deal of unrest on college campuses across the country, including Syracuse University, and the women’s liberation movement was gaining momentum nationwide and coming up against some resistance too.

Hand came to SU because it was the only college that she found at the time that offered a double major in journalism and political science. She would become the first female news director at the student-run WAER radio station and a stringer for WFBL, a local radio station that had its own news department at that time. She also worked to help establish the radio and television news program.

“I got here and I found out that the school of journalism had its television and radio area in the School of Speech and Dramatic Arts. I said, ‘No, no. I don’t want to be taking acting and drama classes. I want to be in journalism.’ So the dean at the time and I essentially designed the radio and television news program, and it’s the basis for what they teach students today,” she said.

The student strikes at SU prompted Hand to earn her degree in 3 1/2 years, and upon graduation, she went to Washington, D.C. She decided she didn’t want to live there, so she returned to Central New York and was offered a full-time job at WFBL, where she worked for Art Peterson, the long-time news director there and one of her mentors.

She learned a lot from both Peterson and Leroy Natanson, former reporter and editor at the Syracuse Post-Standard and an adjunct professor at SU, and one of Hand’s teachers as well.

After admittedly hounding Channel 3 about when they’d start hiring women, she finally got a job there — becoming the first woman in that station’s newsroom. Today, the majority of staff at CNY Central are women. Over time, there have been some changes with some of the local television stations, and now Channel 3, Channel 5 and CW are all under the CNY Central News umbrella.

“I never really thought of it as being a pioneer. I just did it because I knew it was what I wanted to do,” she said. “I did my job, and that’s all I’ve ever done.”

Her original career plan was to remain in Syracuse for a couple of years and move on. But then she met her husband and they raised their two children. And landing here, she said, made her realize that “local news is where it’s at.”

“We decided to stay here, and have no regrets. I’ve grown here. I know the community. It’s my home,” she said.

Throughout her career, she had taken on many roles at the station — reporter, news anchor, and producer, among them. She also created the content for the “In Your Community” segments and was the anchor and producer of NBC3’s Monday Night “Answer Desk,” offering viewers the chance to talk with a panel of experts. She even gave tours of the station. After all, having been there for nearly 50 years there, she knew the place inside and out.

“It’s a business where you have to change,” she said. “We used typewriters. We shot on 16-mm film when I started. The deadlines were definitely different,” she said. Reporters and photographers would have to race back from the scene of a story to the studio in order to process the film and make it ready for the 6 p.m. and 11 p.m. newscasts. There were no on-location live shots.

“It’s a lot more multi-faceted,” she added, referring to the ways that social media has affected the industry. Her ability and willingness to adapt to all these changes is part of the reason for her longevity.

Doing a little reminiscing, she recalled a few of her more memorable interviews, some of which she has recounted over the years.

The day before Election Day, 1972, was Hand’s first day at the television station. On election night, the candidates were due to come to the station to deliver their victory or concession speeches.

Then-Congressman Jim Hanley had won re-election, but because some of the station’s hierarchy had been backing his opponent, Hanley’s visit to the station was a little tense.  Hand was assigned to interview the congressman, and for several months following, she said she was the only one at the station he would talk to.

“That’s what put me on the map in the building here,” she said.

One of the first interviews she was tasked to do was at Hancock Airport with then-Gov. Nelson Rockefeller, who had come to Syracuse for an event. The media were told by Rockefeller’s aides that there would be no interviews. So, Hand moved up to one side of where the governor was walking, and her cameraman was on the other. They stretched a microphone cable between the two of them, which literally stopped the governor in his tracks. Hand found the governor to be very receptive to an interview, and she said the two had a good relationship while he was governor.

“I’m not aggressive by nature, but I’m going to get my story,” she said with a smile.

Hancock Airport was also the scene for a chat she was able to have with former First Lady Nancy Reagan. She was unguarded that day for some reason, Hand said, so she approached Reagan and the two had a long chat.

While she has interviewed some big names of the day, Hand’s most memorable stories seem to revolve around Central New Yorkers doing extraordinary feats. She spoke of the Tully Mud Slide in the spring of 1993, when mud covered 1,500 feet of the Tully Valley 15 feet deep.

The news team was up to its knees in mud, and she recalled watching as a helicopter pilot was able to bring his chopper low enough to rescue people off their rooftops.

And during the early 1990s, she was diligent in her coverage of the Gulf War, and especially the 174th Tactical Fighter Wing’s role in it. The squadron, based at Hancock Field, has since been redesignated as the 174th Attack Wing.

For her work, Hand was awarded the Marguerite Higgins Journalism Prize for her coverage of that war, named for the female war reporter who covered World War II, the Korean War and the Vietnam War.

She was also part of getting the military families’ support group established for the people who were left behind as the unit’s members deployed. “That was a big deal for me,” she recalled.

In her nearly half-century here, Hand has immersed herself in the news and various causes throughout the community. And while she has left the airwaves, she assures everyone that her retirement will not bring an end to her involvement in the Syracuse area. She has vowed that she will “not sit in a corner.”

“I really feel like I’ve championed so many causes in the community, and I hope that’s my legacy,” she said.