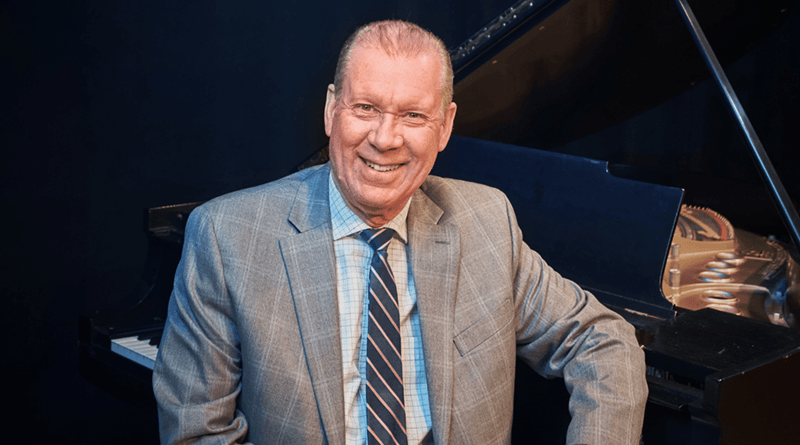 On stage, Larry Luttinger performs his music smooth and eloquent, as if he doesn’t have a care in the world. But behind the scenes, say friends and co-workers, his work is a combination of finesse and tireless dedication, and it’s easy to see he’s always thinking ahead. He is the drummer others march to.

“He’s a seven-day-a-week grinder,” says Ryan Drake, a former student of Luttinger who now works for him. “He has a work hard, perform hard attitude.”

The 67-year-old musician recently embarked upon some major educational initiatives for the organization he established and still runs, CNY Jazz Arts Foundation Inc. He took some time recently to discuss his Central New York upbringing, the growth of his organization and its future.

His parents came from Syracuse’s German-American Catholic neighborhood. But like so many north siders during that era, the Luttingers moved to the suburbs and raised the children as “Liverpoolians,” he said. Family gatherings were always musical. Every Friday night, an uncle played the piano while everyone else sang along. World War II-era numbers were especially popular with the family. Luttinger fondly remembers his grandmother telling him how she gave piano lessons for 10 cents during the Great Depression.

“I was heavily immersed in it,” he said. “It was in integral part of our lives.”

Luttinger took his first drum lesson at age 6. Back then, pupils were given two sticks and a wooden drum pad covered with a rubber pad. Although Luttinger would have preferred something much louder, he loved the way the sticks felt in his hand when they bounced on the pad. At 9, he started playing snare drum in a local bagpipe band, and soon began competing internationally. He traveled around the state of New York, New England and Canada with adults for competitions, and he loved it.

In junior high school, he delivered newspapers for two years and saved up enough to buy his first Pearl drum set. At 15 he jammed with several local garage bands, playing the Beatles, the Rolling Stones, the Who and other British Invasion bands that were adored by teen-agers at the time. To this day, Luttinger’s favorite rock n’ roll drummers of all time are from England — Ginger Baker from Cream, and Mitch Mitchell from Jimi Hendrix’s band.

“Rock music is an outgrowth of R and B [rhythm and blues], and I just feel like some of the British drummers reflect that more in their playing style,” he said.

Luttinger and his brother Jim competed on Liverpool’s first high school gymnastics team, which was established by their father, Bill Luttinger. But as much as Luttinger liked to compete, by the time he was looking at colleges, sports had to take a back seat to music and academics.

With dozens of paid gigs under his belt as a teenaged musician, Luttinger had socked enough money away to further his education. He originally gravitated toward science, completing two semesters at Rensselaer Polytechnic Institute, but his love of music led him to transfer to University of Rochester’s Eastman School of Music his sophomore year. He immediately hooked up with backup bands that were involved in the first wave of the rock ‘n’ roll revival craze. One of those groups, “The Stomping Suede Greasers” was fairly successful and played gigs with the likes of the Angels, Del Shannon and Chuck Berry.

“Chuck Berry will always be the king of rock ‘n’ roll,” Luttinger said. “With him, everything was always about the audience.”

The Stomping Suede Greasers consisted of Central New York residents, including Todd Hobin, a well-known Central New York musician who has played in several local bands and still performs with the Todd Hobin band. They enjoyed a strong following and were in discussions about record contracts but, largely because of the economic recession at the time, things did not work out.

“We did almost everything right,” Luttinger recalled. “We almost made it.”

So, in 1974, the percussionist returned from the road back to Syracuse and entered the classroom again. This time, he rediscovered classical music, earning a bachelor’s degree in music education and a master’s degree in music performance from Syracuse University. He also hooked up with the Syracuse Symphony Orchestra (now Symphoria), which he has remained involved with to this day.

“He is one of the few people in Syracuse who can both play classical music as well as jazz and rock ‘n’ roll,” said Ernest Muzquiz (pronounced moos-keys),” Luttinger’s percussion instructor at Syracuse University. “He came into his audition [at SU] dressed in a black suit. He was the only one who ever did that. I was impressed. I would hesitate to say I taught him anything. He was pretty experienced, and already a well-respected musician at the time. He was more of a colleague than a student — he just needed the degree.”

Luttinger continued on to serve as the chairman of Syracuse University’s music industry department, and he also directed the university’s jazz ensemble.

With decades of rock ‘n’ roll and classical music performances under his belt, Luttinger immersed himself in the local jazz scene in 1996, establishing a nonprofit jazz foundation and orchestra. During its first season, the group played three events. Under Luttinger’s direction, the organization evolved into CNY Jazz Arts Foundation Inc., and expanded significantly, currently playing more than 300 events per year with an annual combined audience of over 50,000 people. It also serves scholastic groups, offering programs for both vocal and instrument jazz musicians, and functions as an incubator for youth musical groups.

Not counting his performance time, Luttinger is typically in his Syracuse office from 10 a.m. until 5 p.m. There are plenty of weeks where Luttinger performs three hours a night Thursday through Sunday.

“It can get hot and heavy,” he said. “There are weeks that can go over 80 hours. It can be a tough profession, and you’ve got to take days off once in a while to avoid burn out. The arts are as challenging of a business as any other. We deal with so many different personalities and market forces, but the unique challenge for us is we provide a product that costs us twice as much as it sells for on the open market.”

Luttinger has visited many places during his tenure as a touring musician, and he’s convinced that Central New York is the best place in the United States, if not the world, for music education. He calls the region a “hot spot” with a very robust curriculum.

There is still a strong need, however, to teach young people how to improvise musically, which is a crucial skill in jazz. To address that challenge, Luttinger established summer jazz workshops. Each year, the program has run at full capacity with 60 students. Many, if not most of the local high schoolers who make the All-Central New York Jazz Ensemble are graduates of Luttinger’ s summer program.

Still, Luttinger explained, developing a life-long love of jazz music has been a difficult task. Plenty of kids participate in high school bands in high school, but few continue to support their local arts as adults.

“This is a new generation of cultural consumers, and we really don’t know why this disconnect exists,” Luttinger said. “Kids are not buying tickets or attending events.”

Another way to attack that problem is for school to invite more professional musicians into their facilities for performances, assemblies or clinics. Luttinger says he can remember every professional musician who ever played in his school when he was growing up, and those events definitely inspired his love of music.

Looking ahead, CNY Jazz has established a five-year plan to extend instrumental music education to urban youth in low-income neighborhoods. As part of that plan, a jazz education center is being targeted for a potential ground breaking next year. Luttinger has already started the grant-writing process. His agency is forging partnerships with various human service agencies, including the North Side Learning Center and the Spanish Action League of Onondaga County.

“Our goal is to create equal access to arts and culture for the disadvantaged,” he said. “My motivation comes from my days with the old metro school for the arts. We used to have an open door based on ability to pay. We want to restore this and bring those opportunities back to Syracuse’s underserved urban youth.”

Ryan Drake, the organization’s director of marketing and development, said Luttinger has maintained the same charisma and level of engagement that he showed when Drake took his first trumpet lesson from Luttinger 17 years ago.

“With the students then, or anyone he is working with now — it does not matter what level they were at,” said Drake, who enjoyed a career as a performer in New York City before returning home to Syracuse. “He just wanted you to be part of the program. His idea was, ‘let’s just get you through the door.’ He gave me great advice: Be flexible in your career, and don’t just think about always being a performer. Be smart about the business and be knowledgeable about all parts of the industry.”

Luttinger noted that he rarely gets a chance to go out to watch live performances for his own enjoyment. Once in a while, he and his wife, Margaret, will go out for dinner and try to catch a concert somewhere in the local area, but it does not happen as often as they would like.

Luttinger and Margaret, who is employed as a corporate counselor, have a cottage on Lake Ontario that they enjoy during the summer months.  They have two grown sons, Max and Jake. Jake lives in the Albany area and is employed as a teacher. Max has remained in the Syracuse area and works in real estate. Both boys played instruments in high school and still consider music a big part of their lives.

While there is a special place in Luttinger’s heart for jazz, classical and rock ‘n’ roll, he maintains that there is no genre of music that he does not like. But every genre, he says, has had its share of flops.

“There are no barriers in musical enjoyment,” he said, “but there is honest music and dishonest music. If it’s produced professionally, I love it. If it’s over-produced, I don’t love it.”

Luttinger applauds MTV for creating an audio-visual art form for pop and rock music, but he does not like the direction pop music has taken in more recent years. “It used to be welcoming to new ideas and new artists,” he said, “but today it has become a corporate culture.”

When he is not performing, listening or planning all things musical, Larry Luttinger enjoys spending time on Lake Ontario, reading, fishing, golfing and bird watching. He says his profession is not conducive to exercise regimens, but he does try to take long walks as often as he can.

Luttinger has maintained a vegan diet for seven years now. At first, it was a difficult lifestyle change for someone who grew up on the German-American staple of meat and potatoes. But with a little creativity and spice, he grew accustomed to the healthier foods quickly and immediately noticed a difference in his metabolism and energy levels.

“No dairy and no meat,” he said. “It can be difficult at a lot of restaurants, because there is cheese on so many things. But I guess I am a ‘Bill Clinton vegan’ — I’ll have a piece of salmon once or twice a month!”

Luttinger remains focused on his organization’s five-year plan, and is already thinking about longer-term goals. Retirement is not on his radar right now. But someone who has made it a mission to share a love of music and arts to as many people as humanly possible can never really retire.

“There should be no barriers to enjoying the arts,” he said. “If we find there are any barriers, then they must be brought down.”