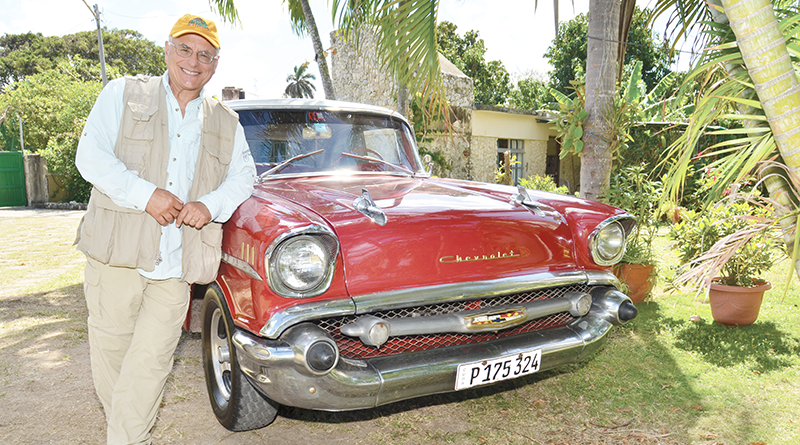 Cubans are perhaps the most genuine people on the planet. Knock on any door, and they would give you the shirt off their back if they had one. If they didn’t, they’d find one. Time has a different value here.

Many travelers think of Cuba as being trapped in a time warp, and to some extent, that is true. That Cuba is stalled in another time accounts for so much of its charm.

Upon closer inspection, changes are indeed happening. On my return trip this year, I saw hotels under construction near some of the most unspoiled yet underused sugar-white sand beaches in the world.

One problem is the “two-and-a-half” lane pothole-filled roads to access these places are still fraught with assorted traffic. It took us 7.5 hours to travel 143 miles and that is typical. It’s a different pace than we know. Some drivers are better than others about sharing the road with a myriad of horse-drawn carts, bicycles, tractors pulling carts, and anything else on wheels. Public transportation is a big challenge in Cuba, even though they just imported 4,000 buses from China. People are always waiting to get from one place to another, sometimes holding out money to entice a lift.

Choosing to venture beyond an organized tour of Havana or a resort stay, our visit to Cuba was well beyond “vacation” and carried us deep into adventure. This is a complex country that is not particularly easy to navigate.

We didn’t have to look; frustration found us. Surmounting that, dancing and song are a way of life, and some of the local lore brings an easy smile to your face. For instance, when making a toast, it’s important to look into the other person’s eyes or you’ll have three years’ bad sex.

The people are as nice as anywhere I have ever spent time. I never heard a loud swear word. However, the country’s infrastructure is sadly lacking, so having a guide, or in our case a personal friend, or contact allowed us to keep moving ahead with the daily bumps and grinds. My traveling companion and friend, professional photographer Larry Benvenuti, has been to the country 26 times. I cannot recall even one day he didn’t say to me, “This is Cuba, man.” And as the Cubans would say, “You have to get used to us.”

It’s definitely not for everyone. Together, Benvenuti and I plotted and planned our trip. Then it changed daily as we adapted to weather and conditions.

We didn’t follow the crowd because then we’d only go as far as the crowd went. We missed turns, took alternate avenues, and created quite an adventure.

From the rear seat, we asked our driver to turn down the air conditioner. When he answered, we literally saw frost come out of his mouth, as you get either too much or nothing at all.

Drivers played chicken with other road warrior drivers, until a car might overheat — as ours did — or break down. No automobile association. You’d better know someone to call or start pushing. With a good job, it takes at least 10 years to save up for a car, but then it’s nearly impossible to maintain it. In the case of an accident or wear and tear, it might take two years or longer for a repair. Anything is possible in Cuba, but nothing is guaranteed.

Those 60,000 pre-1959 American classic cars are indeed a cool way to get around, at first. Then you realize the absence of operating seat belts, an effective suspension, operable door handles, any windshield wipers and other things we automatically count on in our vehicles. Supposedly, there are annual auto inspections. Double white lines in the roads are “suggestions.” Drivers use the horn to alert their presence, with very little use of directional signals. Cigars are not the only things that smoke in Cuba. I grew a new appreciation for pollution standards and regulations in the United States.

Tree-lined streets are “organically enriched.” An occasional horse wore a diaper to catch droppings but mostly not. Law requires helmets for motorcycle riders, but not the much more numerous bicyclists. Both kinds of cycles were much more common than in the U.S. and many motorcycles had sidecars.

On the surface and on TV, things appear to be fine. Below the surface, a lot of government control. At Christopher Columbus Cemetery, we were followed around by the secret police. As we left, our car was checked to see if we stole anything such as pieces of metal with the intention of selling.

Many people hold two or more jobs. Private enterprises are encouraged to keep people happy and off public jobs. On a main road, we regularly saw people step into the passing lane hawking eggs, cheese, onions, and whatever else they could sell for few pesos.

Most of the tourists are from Canada, followed by Spain and France. Once you are used to the place, it is a destination you can definitely revisit. Many Americans don’t know Hemingway lived in Cuba for 22 years, longer than he spent in Key West, Fla.

We ate at private restaurants, which are cleaner and better value than government-run ones. The government controls every large business, no matter what the sign says on the door.

We chose to stay at private homes known as casas particulares — two rooms including breakfast ran about $35. But for internet access, it was necessary to go for a walk in search of a public hot spot and share it with a hundred or so of our new best friends. Even better, we just turned off the electronics and appreciated a simpler life for a while. It’s good for the heart and soul.

Once we reached our ocean destination, the fly fishing was world class. Conventional tackle is not allowed; fishing is strictly catch and release. In the Bay of Pigs, the quarry is primarily bonefish. Bonefish are lightning fast and their skittish nature is legendary. I caught them up to 7 pounds and on a good day might fight up to 18 fish. I was reminded of the importance of spending time in the absence of noise — not another boat, no planes overhead, no other fishermen. All we heard were flocks of pink flamingo taking off or perhaps the screech of an osprey.

In the north at Las Brujas, it is all about resident tarpon. In either place that I fished, most of these fish had never before seen a fly, so they were not shy. We saw the happy fish swimming along, made our cast, adjusted the presentation as we stripped the line with baited breath, and waited.

Those were the moments when time stood still. Then the heart-racing explosion as a fish hit the fly! Tarpon are acrobats. Their spectacular jumps, blistering fast runs, and fighting stamina will test angling skills. Each one I caught was well over 60 pounds. On a good day, I might jump six fish. Lunch on the boat was “ham” and cheese and three pieces of bread wrapped in a napkin. As the day warmed, the napkin melded with the meal. We also had half a pineapple and bottles of water from the only brand in the country, the government-owned Ciego Montero.

The February sun brought daytime temperatures up to 85 degrees; the sea was 82. We wore protective clothing with a UPF 50 rating and made sure to reapply sunscreen to our exposed skin every few hours. Typically, the winds picked up as the day went on. The best fishing winds were the Trade Winds, or a solid Northeast breeze, usually up to 15 mph by the afternoon.

But fly-fishing was just a part of this journey. Of course I took fishing gear to leave with my guides, as there is no tackle shop in all of Cuba. We donated an array of school supplies to a rural primary school. We gifted a duffle bag of seeds to urban organic vegetable farms that appreciated the infusion of new varieties. After serious food shortages in 1994, the country embraced urban farms and it happily turned out to be successful.

Cuba has the largest experiment in organic agriculture anywhere in the world, mainly because it has little access to pesticides and is constantly figuring out how to do more with less. But the country still imports over 70 percent of its food.

As a horticulturist, I loved it. Over 3,000 plant species are endemic to Cuba. There was no litter in the water anywhere. I have spent time in 39 countries. This one is a spiritual and organic opportunity not to be missed. It is the largest organic farming nation in the world. People are happy despite the lack of so many things we’ve grown to consider necessities.

Will I return? Of course. For 2018, I am targeting 100 miles east to Cayo Romano. It’s a refreshing privilege to visit nameless streets in small villages where the people save, wash and reuse plastic bags. Where there are no TV commercials. There is no online purchase of anything. Each day has its own personality. Even the rides to and from the airport are adventures.

After all, you don’t make life memories playing video games.