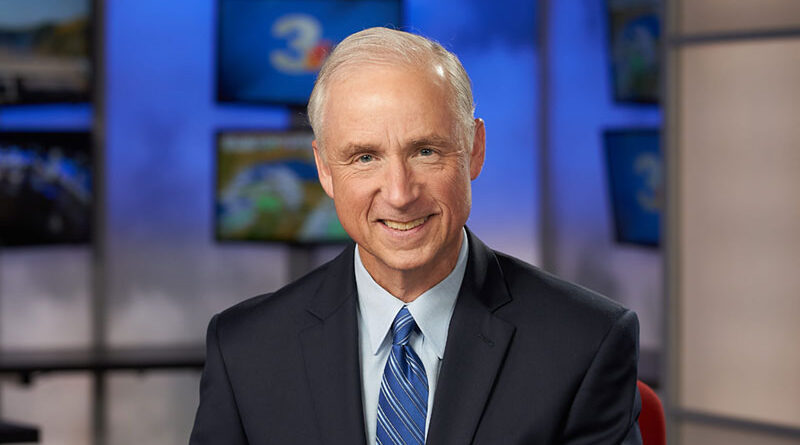 Chasing stories through the years. Award-winning CNYCentral anchor, who turned 55 in October, reflects on decades-long career in front of TV cameras

Matt Mulcahy didn’t grow up knowing he wanted to be a newscaster.

His career plans were a question mark when he graduated from Liverpool High School in 1983. And at Ithaca College, his initial major was “exploratory undecided.’’

He knew he was interested in English, writing and research, and he knew that Ithaca had a strong communications program. One day, his roommate headed over to the college television and radio stations to check them out and Mulcahy decided to join him. He liked the hum of activity and the enthusiasm of the student journalists. He found his niche.

“I remember getting there initially and thinking, ‘boy, the people who are here at this TV station working on newscasts and radio newscasts and doing everything from sports play-by-play to directing programs and DJ-ing — all these things that were part of media pre-digital, especially — boy, they spend a lot of time here.’ I can’t believe how much time. And within a year I was one of those people spending all that time there. I kind of caught that bug. It turned out to be a great convergence of interests and talents I had with regard to writing and performance and curiosity, wanting to know what was going on in the world but also wanting to be part of what was being covered. To tell people what was going on in the world… I found that very appealing right away.’’

Mulcahy went on to get a degree in broadcast journalism and become a respected, Emmy-winning television reporter, anchor and producer — and one of the most longstanding and recognized faces on Central New York TV news.

He later spent seven years at WTVH-5 before returning to WSTM. WSTM and WTVH are operated by Sinclair Broadcasting. The stations merged in 2009 to form CNYCentral and they share a reporting staff. Mulcahy is anchor and managing editor of the NBC3 news at 5, 6 and 11 p.m. on weekdays, as well as the CW6 news at 10 p.m. He anchors the early evening newscasts with Megan Coleman and the 11 p.m. news with Meghan Bragg.

Mulcahy, who turned 55 in October, says the recipe for the nightly newscast hasn’t changed much in 30-plus years — but technology and the demands of the job have. Seasoned professionals like him make it look easy, but a lot goes on behind the scenes and before he stands in front of the cameras each night.

Mulcahy’s unofficial workday begins when he wakes up and checks his phone to see what’s going on in the world. If it’s nice out, he gets in a run at Green Lakes State Park with his wife, Jamie Pomilio-Mulcahy.

His official workday begins around 2 p.m., when he heads into the studio on James Street from his home in Fayetteville and has a phone conference from his car with news editors, producers and station management about the day’s stories and how they’re shaping up. A larger, more formal news meeting takes place when he gets in the office.

On a late-summer weekday, the stations were sending a reporter to SUNY Oneonta to report on the surge of COVID-19 cases that forced cancellation of in-person classes and another reporter to SUNY Oswego to cover COVID-related developments there. Most days, there’s an hour or two before the early newscasts that allow him to carry out phone and Zoom interviews for stories he’s working on, make plans for his “Matt’s Memo Conversation’’ on Facebook and update social media.

Thirty years ago, Mulcahy says, he couldn’t have imagined today’s digital revolution and how it would affect what he and his colleagues do on a daily basis.

“We’re constantly thinking about what are we tweeting out, what are we posting on Facebook, what are we putting on our website, what’s going on our mobile app, what’s going on our Instagram page, what user-generated content is being created and what people are gathering for us that we can then turn into something more,’’ Mulcahy explains. “If we have a great development, we want to get it out before syracuse.com or Channel 9 or somewhere else and get it out there digitally for all our news consumers who are getting their news that way.’’

One aspect of his job that Mulcahy particularly enjoys is “Matt’s Memo.’’ It started out as an email newsletter then morphed into a blog, where Mulcahy shared thoughts on everything from life in Central New York to the lure of the ocean to NCAA infractions at Syracuse University to a snapshot of his 35th high school reunion.

In recent months, it has evolved into “Matt’s Memo Conversation,’’ a half-hour (or so) chat on Facebook featuring questions and comments from viewers. Mulcahy goes live on Facebook, usually around 9 p.m., several times a week. In March, when Gov. Cuomo ordered schools, restaurants, entertainment venues, shopping malls and more closed and encouraged people to stay at home to help “flatten the curve” of  coronavirus infections, the conversations attracted upwards of 25,000 viewers a night and featured mainly questions and concerns about the pandemic.

“People really became engaged in that conversation and came to rely on it,’’ Mulcahy says. “And some are still relying on it. Our audience is definitely smaller now than it was then, and I think that reflects the obvious: people aren’t as intensely concerned and aren’t as in the dark about COVID. Everything about it is less heightened now than it was at that time. But I’m still sticking with it.’’

If you’ve watched Mulcahy since his early days on local TV, you’ve seen his hair transition from youthful brown to distinguished silver. Some of the most memorable stories he has covered include the blizzard of 1993, the Labor Day storm, the September 11 terrorist attacks and the canonization in Rome of Saint Marianne Cope, who ministered in Syracuse and Hawaii.

He’s especially proud of the r 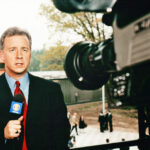 eporting and writing he put into “The Heidi Allen Files,’’ an hour-long investigative report that uncovered documents containing information not previously shared with the public about the disappearance of teenager Heidi Allen in Oswego County in 1994. The documentary, which aired in 2019, earned Mulcahy his fourth New York Emmy Award.

Megan Coleman, who co-anchors 5, 5:30 and 6 p.m. newscasts with Mulcahy, says there are some days her friend and colleague is so caught up in gathering information for stories he’s working on that she doesn’t see him until shortly before the news.

“One of the things that I appreciate the most about Matt and have tried to learn and study is his dedication to a story,’’ Coleman says. “What I mean by that is when he picks a story he’s going to follow, he’s living it and breathing it day in and day out. That is what makes Matt one of the best investigative journalists. He’s not someone who just sits at his desk and makes a couple of calls. He really digs in.’’

Mulcahy’s days are long — he leaves the station on James Street around midnight each night and often winds down with a selection on Netflix with his wife and their dog, Bentley. When he’s not at work, he spends time with his family (his parents still live in Liverpool), gets out on the golf course and assists his wife with The Shamrock Fund, the nonprofit organization they founded to help people with limited financial means get needed veterinary care for their pets.

He goes to sleep grateful for a job that connects him to the community and brings him professional and personal satisfaction.

“I like what I do,’’ Mulcahy says. “I’m out there every night anchoring the newscast and engaged in our daily news gathering but also able, thanks to management and ownership of our stations, to work on interesting stories and investigative stories that give me sort of two paths ongoing that keep me engaged in process of doing quality work that’s a little bit different than the daily newscast.’’

And the Emmy Goes to…

The first was for a 2000 documentary he completed while at WTVH-5, “Bosnia: Returning Home.’’

He earned two more for anchoring newscasts: one for a field newscast on the conviction in the murder trial of Dr. Robert Neulander (2015) and another for a newscast devoted to a deadly fire on Martin Street in Syracuse that left six people dead.

The most recent is for his 2019 documentary on the Heidi Allen case, “Heidi Allen Files.’’ 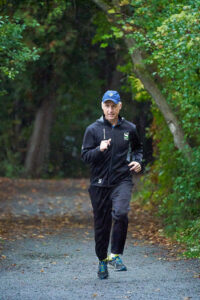 I run nearly every day, at least five days per week. Over the last several years, I have combined my running with indoor spinning classes, although COVID-19 shut down the gym and pushed me outdoors to run even more. In fact, during the early quarantine period back in April and May I put in more miles per week than I ever recall running before. As many as 50 miles per week.

I typically run on the trails of Green Lakes State Park where there are numerous paths including a variety of flats, hills, wooded areas and open fields. The four seasons of CNY transform the park from the robust colors of autumn to the gray scale of winter. The rebirth of spring to the energy and light of summer. My wife Jamie and I usually go over to the park together mid-morning. She walks her route while I run, then we grab coffee before heading home. That mid to late morning time fits well with my work schedule that has me into the television station by 2:30 each afternoon.

Over the last 30 years there has been an ebb and flow to my commitment to running. But I always come back to it. Sometimes I find focus and goals leading up to a race such as the Mountain Goat or the Boilermaker. I am not a threat to win the first place medal, but the competitive nature combined with the community spirit and energy of a road race deliver a true thrill in being part of the combined human effort. 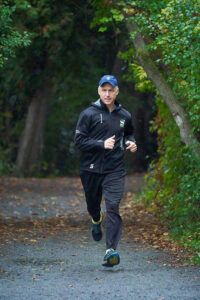 My goals with running start with staying fit. Pre-COVID-19 I was still playing a pick up basketball game every Saturday. The running ensures I can keep getting up and down the court with endurance that often is greater than guys who are quite a bit younger.

But I also value the everyday running experience. It creates space and time to break away from the stresses of life and work. It provides an opportunity to be outdoors, amongst nature.

Often, I catch up on favorite podcasts or new music releases. It’s not just about getting the body moving, but also freeing the mind to think. While in the middle of covering a story or writing an in-depth piece, I have often generated a fresh idea or resolved a complex issue while out running on the trails.

There are private moments of exhilaration when a few miles into a seven-mile run you suddenly become aware of pace, fresh air and the surrounding setting. Running brings joy.