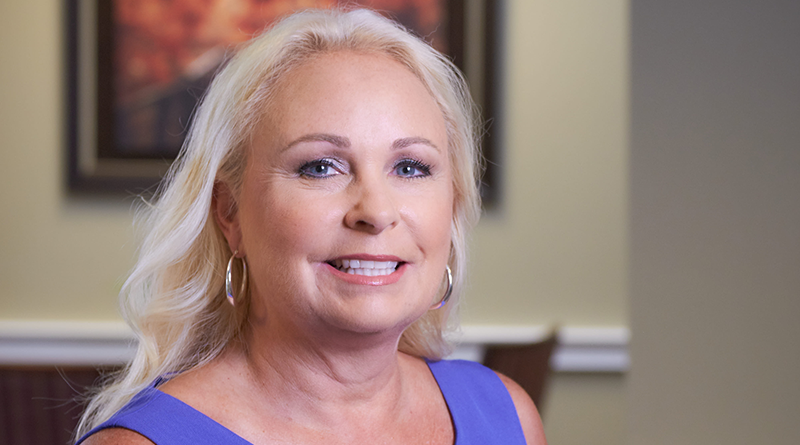 Exceptional people really do make every day extraordinary. Kimberly Townsend, president and CEO of Loretto in Syracuse, is a prime example of that.

The 55-year-old mom who had previously quit college so she could take care of her children now holds a law degree and a doctorate, and leads one of the most impactful and innovative health care organizations in Central New York.

Many advancements and upgrades have occurred at Loretto since her arrival in 2014, and now she is ready to unveil her first book.

“Life Circle Leadership: How Exceptional People Make Every Day Extraordinary,” is being released in October.

“It’s built on the premise of our leadership principles here at Loretto. One of them is not only to try to be family with the people we care for, but also try to create family with each other,” she said.

“We provide care for employees because we believe health care is a point of service business,” she said. “Happy and satisfied employees deliver better care to our residents.”

Townsend said Loretto makes strategic investments in the community based on a principle known as pragmatic altruism.

“If we make strategic investments in our community, not only will it help people, but it also helps our business. We’ve really seen that in action,” said Townsend, noting that is a key premise to the book.

The book is being published by Forbes Advantage Press and will be available at 35,000 outlets.

Townsend said she tried to make it broadly applicable to anyone and to challenge those who are aspiring to be leaders.

“I really believe strongly there are leaders everywhere, such as here at Loretto at every level of the organization. I think this is a great book for anyone who really wants to make a positive impact on other people’s lives and their community,” she added.

The book was a byproduct of work Townsend did on her dissertation in May of 2017.

“I defended my dissertation, which was on leadership principles, within St. John Fisher College School of Education’s executive leadership program,” Townsend said.

“I took some principles from my dissertation and applied them in this book,” she said. “It was a multi-year process, and part of that was talking to exceptional leaders and seeing the principles they applied in their own lives and organizations. That gets reflected in the book.”

Townsend noted she has a detailed launch plan that is built out over a year that will involve speaking engagements and book signings.

“We will be rolling it out in different venues,” said Townsend, noting a website will be launched that is tied to her book.

Townsend is a frequent speaker on topics such as leadership principles and health care.

The book will serve to “help sharpen the pencil” on some of her speaking points, said Townsend, noting she enjoys being able to distill what the leadership team at Loretto does and share it with others.

The Syracuse resident has been published before, but not in book format. “It’s a great way to express ideas and stimulate discussion, which is really what I enjoy doing,” she said.

Townsend, born and raised in New Hampshire, went to Boston University for two years after graduating from high school, but then opted to stay home and raise children.

In 1984 she moved to Syracuse where she remarried. She has six children and three grandchildren.

“I consider myself a transplanted native to Syracuse,” she said.

“It’s a great place to raise a family and geographically, it’s just so diverse with its mountains and lakes. It’s affordable for families and convenient being you can get really anywhere in 20 minutes. There are so many options and things to do,” she said.

She went back to school in her mid-30s as a non-traditional student.

“I worked, managed children and had school,” she said. “Having the perspective of a non-traditional student helps me to understand the challenges our own employees face and ensure we have good work-life balance.”

Townsend describes herself as the “Super SU alum.”

Most recently, she earned her doctorate at St. John Fisher College in Rochester during her tenure as Loretto CEO.

After she earned her first master’s degree, Ernst & Young hired her as a certified public accountant.

“They were a very supportive employer. After my first year of law school, I was hired by Welch Allyn and worked there for 14 years,” said Townsend, noting she explored several roles and left as assistant general counsel and senior director of government affairs.

She had been on the board at Loretto for 14 years, and was chairwoman for two and half years.

“When the CEO seat opened, that opportunity became available to me,” she said.

“I believe in setting a big table and getting everyone to the table where every voice is heard and valued,” she said.

“I believe solutions to problems reside where they occur — on the front line. That’s made me a very good fit here. I’m also a strategic thinker. Even the most complex problem from my perspective can be distilled down to two or three key drivers. I focus on those,” she said.

“I think I have a good understanding of where the puck is going next and I have a great team here at every level,” she said. “I think I’ve been a good listener to them and rely on them to bring forth innovations that have led to the success of the organization and have distinguished it from others.”

Townsend noted her parents are hard workers and were Depression-era people who grew up quite poor.

“They always worked hard and valued education, and encouraged that in their children,” she said. “Even though neither of my parents were college-educated, all three of their kids were,” she said.

“Drive is something that is an inner-motivating, animating force and something that has always been important. I’m always very curious and like to learn new things, and that has helped as well,” she said.

“I love community and board service, and it is something I have always had a passion for,” she said.

Townsend commits herself to several local, regional and national board positions, serving locally on the board of HealtheConnections, the WISE advisory board, the Manlius Pebble Hill School board, CenterState CEO board, the board of Central New York Care Collaborative and sits on the finance council of the Roman Catholic Diocese of Syracuse. She also supports LeadingAge New York board — Loretto’s trade association, is on the board of the Business Council of New York State, participates at a national level with the SEIU 1199, the State Workforce Investment Board, and participates on the local and national level with the Women’s Presidents’ Organization.

She has also been recognized for her leadership on the board of the United Way for several years and the executive leadership board for the American Heart Association, as chairwoman of the “Go Red for Women” campaign in 2016.

While she enjoys spending time with family, her community service “inspires me and renews my energy,” she said.

“I’m organized and always work ahead, because there is not a lot of margin for error in terms of my schedule,” she said. “I’m not a procrastinator, but rather a person that tends to be very prepared well in advance, and that allows me to do more.”

On the topic of fitness, Townsend said she has a “love-hate” relationship with Fit Body Boot Camp.

“On one hand, I dread going because it’s so hard, but on the other hand, I love it when it’s done and love the results.”

She tries to work out six days a week as a stress reliever, and is usually successful in doing that.

“I do it whenever I can. If I have early morning meetings, it’s not 5:50 but might be 4:30 in the afternoon. I try to get myself there and it’s a great stress reliever,” she said.

It is becoming increasingly important to take care of one’s physical and mental well being, as studies show that 25 percent of the time, one or both members of a couple will live to 100 years of age.

“You have to take care of yourself, eat healthy and plan for the long haul,” she said.