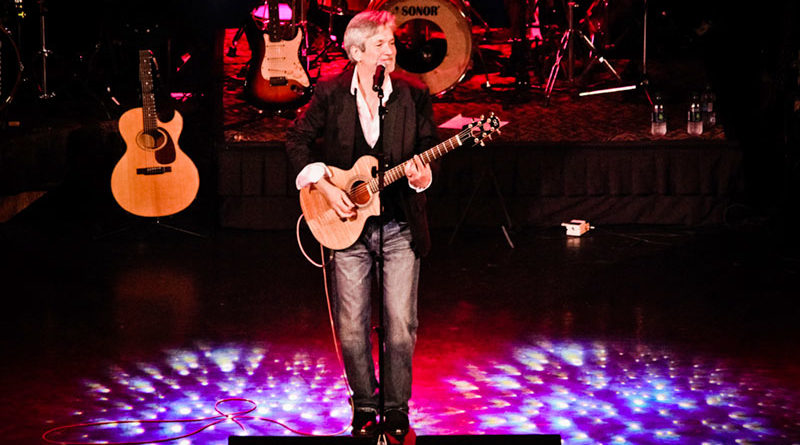 Two years after two brain-debilitating strokes, musician Todd Hobin is more active than ever. He shares his experience

Recovering from a stroke is a long and challenging journey that can take weeks, months and even years. Musician Todd Hobin suffered two brain-debilitating strokes in the spring of 2018 and worked his way back to business and life as usual remarkably quickly.

“Had a stroke, back on stage,” says the advertisement for Crouse Health featuring Hobin that appears often in this magazine. It’s not quite that simple, yet it’s true. And when it comes to stroke — the third leading cause of death in the U.S., behind heart disease and cancer — it’s no coincidence that acting FAST is key to treatment and recovery (see sidebar).

“I’m one of the lucky ones,’’ Hobin says today.

Seeing Hobin in concert, someone sitting in the audience wouldn’t necessarily know what his brain and his body have been through. He’s lean and fit, with a full head of silver hair that is no doubt the envy of many men his age. (The musician is 70.)

At the Palace Theatre in Syracuse on Jan. 24, Hobin donned a black tux and strapped on a guitar to open “Rockin’ the Opera,’’ a fundraiser for Music for the Mission. He performed his song “One Voice’’ before turning the show over to many voices — 100 singers and musicians from the Syracuse Opera Chorus and Syracuse Pops Chorus. Later, he jumped back on stage to get the audience clapping and stomping to Queen’s “We Will Rock You,’’ and joined singer and friend Letizia (Pinkel) on keyboards and vocals for his composition, “Memories and Dreams.’’ 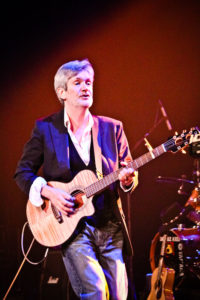 He had just started a new semester as an adjunct professor of music at LeMoyne College and was getting ready to produce and record albums for several other local musicians at Hobin Studios, near Baldwinsville. A couple weeks later, Hobin was honored by the CNY Brain Aneurysm Awareness Campaign for his advocacy related to stroke awareness. Stroke doesn’t define him, he says, but the experience is very much a part of him.

“It’s all about awareness,’’ Hobin says. “People in my age group, 65 plus, are the targets of stroke. I didn’t know anything about stroke before I had one.’’

• Nearly three-quarters of all strokes occur in people over the age of 65.

• The risk of having a stroke more than doubles each decade after the age of 55.

• And perhaps most importantly: “Stroke can occur at any age. Anyone can have one,’’ Hobin says.

Here’s how Hobin remembers the medical incident that changed his life:

He arose one morning in May of 2018 and couldn’t move his left arm. It was completely numb. At first, he thought, he had slept on his arm wrong or somehow pinched a nerve. He called his doctor, who told him to call 911 and say, “Take Me to Crouse.’’ 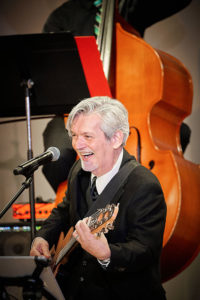 At the hospital, Hobin learned he had suffered two strokes, both caused by clots in his carotid artery. He had surgery immediately to clear one of the blockages and had a second operation a couple months later.

Hours after surgery, Hobin’s rehab began. He is never far from a guitar and his son brought one to the hospital. The most he could do at first was touch it and gently finger the strings. But musicians are good candidates for physical therapy and rehab because they’re accustomed to practicing every day.

For the next several months, Hobin says, he did everything he could with his left hand: eat, drink, write, brush his teeth. He unplugged from technology — no phone, no computer, no TV — and instead read novels. He exercised and meditated. And he played the guitar for hours, every day, to help regain his motor and cognitive skills and improve his memory.

“Unfortunately, when we have a stroke we have a brain blow-out,’’ Hobin explains. “Therapy started one hour after surgery and continued for five to 12 hours a day. For the first three months, that’s all I did. I replaced practice with rehab. Over time, I rewired the neurology. It was hard coming back. I was very fortunate.’’

Since that time, Hobin has tirelessly shared his stroke story to help inform and educate others. He sits on the board of directors of Triumph Over Stroke CNY, a nonprofit organization sponsored by Crouse Hospital that offers support, resources, hope and understanding to stroke survivors, family members and caregivers. The group, founded by stroke survivor Katie Weiss, meets 6 to 7:30 p.m. the first Wednesday of the month in the Physicians Lounge (first floor) at 5000 Brittonfield Parkway, East Syracuse.

“Todd and I partner a lot to work on trying to get this organization out there,’’ Weiss says, noting that the organization will host a family friendly concert and health-focused event June 27 at Sharkey’s of Liverpool. “Todd does a great job of educating people about the symptoms of stroke and the time-sensitivity of stroke. It’s helpful to have someone like him willing to share his story and it makes other people feel more comfortable sharing their stories.’’

As for his life in music, Hobin continues to rock on, just as he has been doing for the last 50 years.

Hobin grew up in the Rochester area, the son of a teacher and an artist. He graduated from Rush-Henrietta High School, where one of his classmates was Lou Gramm, of the band Foreigner. He studied music composition at SUNY Potsdam’s Crane School of Music and gravitated to Central New York, “a great halfway place between everywhere,’’ following graduation. He formed his namesake rock band at Potsdam in 1974.

If you’re a Central/Upstate New Yorker “of a certain age,’’ the odds are good you’ve seen the Todd Hobin Band in concert. The band grew a loyal following with energetic performances, hits like “I Hate You’’ and “New York Country Song’’ and non-stop touring. They played colleges, clubs and other venues all over the northeast, opening for headliners like the Beach Boys and the Allman Brothers Band. The original members of the band are still together, minus founding member Doug Moncrief, who died last year.

Dave Frisina, disc jockey and program manager at TheRebelRocks.com and host of the long-running local music show “Soundcheck,’’ says he first became aware of the Todd Hobin Band in the 1970s, when the band played at his alma mater, SUNY Cortland. When he moved to Syracuse for a radio job in 1978, Frisina recalls, the Todd Hobin Band was packing clubs and getting regular airplay.

These days, their paths cross now and again because Frisina’s son, Mike, and Hobin’s son, Brett, are members of the band Simplelife — and because Hobin remains such a steady presence in the local music scene.

“Over the years I’ve admired his quiet-spoken and reflective personal attitude balanced by his warm, engaging showmanship on stage,’’ Frisina says. “He’s a great ambassador for CNY music.”

Hobin says the loss of Doug Moncrief was tough for everyone in the band and they are still mourning his loss and grappling with how to go forward. “He was a founding brother in every way and no one can take his place,’’ Hobin says quietly, during an interview at his recording studio. He says the band will probably play about 10 concert dates this year, including the event at Sharkey’s in June and (hopefully) a show at Paper Mill Island in Baldwinsville.

“Hometown shows are great,’’ Hobin says. “I get to sleep in my own bed. The older I get I like to be home.’’

Hobin and his wife, Joann, live on Pleasant Lake, near Pennellville. Together, they have six adult children and six grandchildren. In the late 1980s, after years of traveling and touring, Hobin purchased land on the Seneca River in Baldwinsville and built a recording studio. Brett Hobin lives on the property, and father and son can often be found in the studio, writing songs, recording other artists and working on musical arrangements for audio books and TV and radio commercials.

In addition to guitar and piano, Hobin plays saxophone, flute and trumpet and dabbles in art. He eats healthily, takes walks and goes to the gym a couple times a week. He admits to smoking an occasional cigar. At an age when some people can’t wait to put their work life behind them, Hobin says he has no plans to retreat from music and performing.

Acting FAST is Key for Stroke

If you think someone may be having a stroke, act FAST and do the following simple test:

F — Face: Ask the person to smile. Does one side of the face droop?

A — Arms: Ask the person to raise both arms. Does one arm drift downward?

S — Speech: Ask the person to repeat a simple phrase. Is the speech slurred or strange?

Note the time when any symptoms first appear. This information helps health care providers determine the best treatment for each person. Do not drive to the hospital or let someone else drive you. Call an ambulance so that medical personnel can begin life-saving treatment on the way to the emergency room.