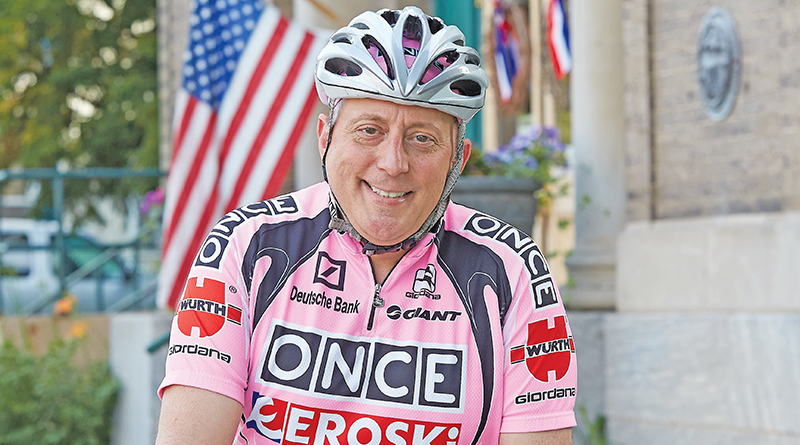 In today’s day and age, it’s common to hear the cliché, “55 is the new 40.” Simply put, people don’t look or feel as old as someone of the same age a generation or two ago.

He is a recent newcomer to the 55-plus set, and will turn 56 in late September.

Cortini Shoe Store is iconic insofar as the Fulton business community is involved. With its beginnings circa 1910, the store in Fulton is one of the oldest family-owned shoe repair shops in the country.

Cortini has been able to stave off the aging process to the point where he is operating on a younger level physically, emotionally and mentally than his peers of preceding generations.

“I could remember years ago when someone would be celebrating their 50th birthday and the expression was that person was ‘over the hill,’” Cortini said.

He said generally, people nowadays are making a concerted effort to stay in shape and eat smart.

“First and foremost, no matter what you want, the information is there.

“In regards to physical fitness, health and clean eating, everything is presented to you. If you don’t take advantage of it, you’re living in a cave.”

Cortini said people are emphasizing the need to associate what they eat to how they feel physically.

Basically, Sears addresses the importance of balancing out carbohydrates, proteins and fats to put one in “the zone.”

“You ever notice how some days you feel great and can accomplish anything, and other days, you are maybe sluggish and lethargic?” he asked.

“If you look back through history, a physician was really an experienced chef and would cook you something to make you feel better for whatever was ailing you,” he said.

Cortini said he has encountered people he went to school with only to hear, ‘Oh I’m getting old.’ It’s a mindset.”

He said there are plenty of activities to enliven life, noting there are more 50-somethings cycling more than ever.

“You take care of yourself and you try to look and stay young,” he said.

Cortini said his “ace in the hole” is his soon-to-be 9-year-old son, Joseph Patrick. By sharing activities such as cycling and piano lessons, “it helps keep me young,” Cortini said.

“I really enjoy cooking almost every day. When I plate dinner, I do it very carefully and artistically. Sometimes I will even stage a plate for a photo before actually serving it up,” said Cortini, noting he will make sure such factors as lighting are “just right.”

“It’s amazing,” Cortini said. “I can be walking through a grocery store and have someone say, ‘That salmon dish looked great’ or ‘hey, can I get that recipe for that pasta dish?’”

“It’s just a very interesting phenomenon and it has taken on a life of its own,” he added.

Of all the tantalizing foods out there from around the world, Cortini said his favorite is not lobster or steak — it’s pizza.

“It has to have a nice, crispy bottom and be almost black and charred,” he said.

With diet, it’s all about moderation and bitter, leafy greens, he said.

“Everything I cook is from scratch and I avoid processed foods and never eat fast food,” he said.

In terms of countering stress, Cortini said cooking dinner is “an awesome way to chill out.

“I get so wrapped up in balancing flavors that it can make the day’s troubles go away. That and don’t act your age.”

Having a sense of humor is essential as well, Cortini noted. “It’s OK to be sophomoric once in a while,” he said.

One antic that Cortini and his significant other Beth Ann Dice pulled off was a classic April 1 prank.

Cortini even featured a photo of a Cisco truck parked in front of his shoe store on Facebook, and got many to believe that The Italian Scallion was up and running.

“We had people believing it to the degree that other local restaurant owners were wishing me luck,” he said. “Even months later, I had people coming up to me asking how the restaurant was doing.”

He and Dice work often as a team and are known as The Italian Scallions, and have won and placed in several cooking contests.

Cortini loves riding his bicycle, and puts in typically 75 to 100 miles per week.

“The bike is a great way to clear your mind and get a fresh start,” he said.

Cortini said he rides so he can eat.

He said once you attain riding 100 to 150 miles a week, it allows you to “eat pretty much anything you want without any bad consequences.”

However, he cautions that it is “not a license to just go crazy” in regards to eating.

“When you are out there on the bicycle, it doesn’t matter what kind of day you had. If you can get out on the bike, everything goes away,” Cortini said. “It’s therapy and meditation.”

For Cortini, biking is as much about the sights, sounds and smell as it is a method to maintain a healthy weight.

“It’s so interesting cruising through the countryside. You say to yourself, ‘This person has pigs, and this person has chickens, or they got something going on the grill, or they are using dryer sheets’.”

He rides with his friend, Sam Vono.

Not only does he continue the tradition of running the family business, but Cortini is highly active in the community and its music scene.

A drummer, Cortini is a staunch advocate of live entertainment. He and his brother Kimo still share the stage from time to time.

Cortini is a member of Dr. Boogie, a popular rock ‘n’ roll band that now only plays one show each January.

“Kimo is very busy with the band Billionaires and I have been doing a lot of sub work, mostly in the Syracuse area,” he said. “Sometimes it’s with a trio, while other times it’s with an 18-piece big band.

“I like the role of band leader and would like to put together another band in the near future,” he said.

The gratification Cortini gets from sharing his musical talents is making people happy.

“People love music and everyone can relate to it,” he said.

He has been heavily involved in volunteering his time and energy to support community initiatives.

“Fulton Jazz Fest is very high on my list. Music brings joy to people and helping create these events can bring the community together,” he said.

Cortini’s dad Joseph Sr. was a drummer and his grandfather Joseph N. Cortini was a music teacher who played several instruments.

“My dad was a drummer, so I followed in his footsteps. I also studied piano for several years,” he said.

Cortini does have his ideal retirement scenario all planned out.

“Win the Lottery, and then spend the rest of my life giving it away,” he said.

“Seriously, I am working harder now than I ever have,” he said. “I don’t see myself retiring, but maybe working a little less and playing more music.”

Significant to each other

Dice said Cortini has qualities that include commitment and dedication to family.

“First and foremost, he is definitely dedicated to family, especially his mom, whom he cared for during her last years of her life,” she said.

“He sacrificed so much of himself to ensure she always had the best care, whether it was at home with him or in a professional facility,” she said.

In terms of Cortini’s commitment to his community, he is “always willing to step up, step in, and lend a hand to those in need, as evidenced by the coat drive he started two years ago,” Dice said.