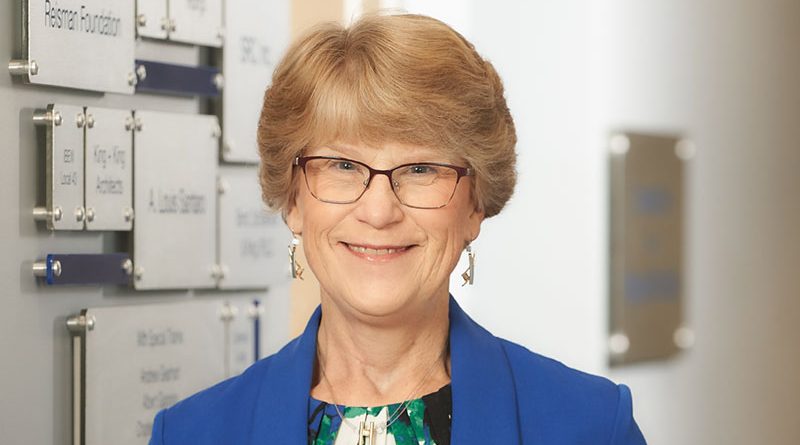 It’s been just a little more than two years since Nan Eaton became the president of the United Way of Central New York.

During an interview with 55 Plus magazine in 2018, she said her work with nonprofits and human service agencies for more than 25 years had prepared her for the new role.

Today, Eaton continues to lead the agency, helping it to adapt to the winds of change in world, nation and the community.

“When I came, I believed and the board recognized that this is a time of change for United Way organizations all over the country. Ours as well,” she said.

Yet, its cornerstone is to highlight human needs in the community and then support services to meet those needs.

Eaton referred to the vital role that United Way of Central New York plays by providing ongoing support to local programs and bringing community resources together to create a pool of funds to strategically invest in those programs.

“Revenue comes mainly from workplace-giving campaigns, in which employees can give a percentage of their weekly or biweekly paycheck. Traditionally, many companies have conducted their United Way efforts in the fall, but the individual companies decide when to run their specific campaigns, depending on what works for their budget, their employees and their workload,” Eaton said.

While these giving campaigns are still the lifeblood of the United Way, today’s economy, technology, shifts in population, the way people think about giving, the workforce dynamic, and recent changes in the tax law have required United Way organizations across the country to adapt their models.

One of United Way’s most recent changes has been its move this past summer from the 500 block of James Street, to space at 980 James St., the former WTVH studios. While the square footage is slightly less than the previous location, the layout is operationally more efficient, she said. Eaton also noted that the entire team is thrilled with the new home and delighted to be spending less in rent for much better space. She credits property owner A. Louis Santaro for the excellent work done on the building and his ongoing support.

But there are other changes.

United Way of Central New York has a budget of just over $6 million and provides funding to programs at more than 30 agencies in Onondaga County. These services cover a wide range of programs addressing basic needs, education and health. As Eaton put it, “to help people get beyond today’s challenges and toward a brighter tomorrow.”

Almost 60% of the budget is used for program allocations. Donors designate 30% to specific agencies, and nearly 12% covers operating costs. The United Way of Central New York also receives $2.3 million in funding for collaborative initiatives and grants.

Eaton said funding from United Way of Central New York provides the match that’s required by government contracts. “Donors are delighted to learn that $1 million that we allocate to 23 of the programs leverages an additional $3 million in tax dollars,” she pointed out. “That type of return on investment, $1 million becoming $4 million in services, is a powerful outcome, with significant local impact.”

The United Way of Central New York’s funding also supports programs that do not have a matching requirement. It allocates most of its funding in three-year cycles, so the last time agencies submitted requests was in 2017. At that time, the organizations that had made requests and then passed through the fiscal and management review process had submitted requests for more than twice the amount that the United Way of Central New York had to give out.

Today’s economy, technology, shifts in population, the way people think about giving, the workforce dynamic, and recent changes in the tax law have required United Way organizations across the country to adapt their models.

“Clearly, all the funding is going to incredible programs, yet so much need was not filled,” she said.

The loss of some of this community’s larger employers severely affects the fundraising. For example, when New Venture Gear closed its plant in the early 2010, the United Way lost $500,000 in employee contributions, Eaton said. With companies downsizing, shuttering or moving elsewhere, the economy of the area has been shifting, and more businesses are service-related or entrepreneurial in nature.

Keeping the chin up

Yet, Eaton remains enthusiastic about the future, with some new board members added to the mix, a revised planning process, and a greater focus on partnerships and community leadership.

The addition of some new faces to the board — some younger people, some entrepreneurs, its first New American, several marketing experts, and at least one new member who runs a digital marketing company — brings fresh ideas and innovative ways of connecting with the public.

“We want to be nimble to be able to respond,” she said. Toward that end, the board in 2018 went through an intensive strategic planning process, the result of which was a plan that has the organization looking at everything it does to make sure it is aware of needs in the community.

“It’s fair to say we’re looking at how we can best have the greatest impact in the community, trying to identify perhaps a little more specifically the role we will play, with respect to say seniors or youth, workforce development, school readiness, child care, addiction, mental health, and suicide prevention,” she said.

“We are looking at how we can support smaller, newer agencies that are doing important work,” she added. The United Way can play a part in helping people transition from living paycheck to paycheck to finding financial mobility, she added.

Eaton, her staff and the United Way of Central New York board are also thinking differently these days in terms of how to effectively communicate with the younger workforce and how to navigate in the digital age, with all the benefits and disadvantages that the internet offers.

The internet has had a huge impact on people’s charitable giving, she pointed out. So much of the United Way’s income stream came through those workplace campaigns, but now with websites and apps like GoFundMe and Kickstarter, that model might have to evolve into a range of choices.

The United Way has to be sure that people understand its value, and Eaton said the United Way’s role is to help people understand why it continues to be an important part of the community, how it can help to identify significant issues and opportunities, and show that the types of services it offers demonstrate outcomes.

“There’s no question that Millennials (born between 1981 and 1996) and Generation Z (born 1997 to 2010) approach many things in unique ways. I think that’s why we have these incredibly successful entrepreneurs who are inventing things, who are imagining things, and who are not allowing themselves to be limited. They also ask a lot of questions. They think differently about making a difference,” she said. “They want to be involved, more than just by giving money. They want to be part of something. I think many organizations are looking to clarify how people can be involved with them.”

Her optimism is also fueled by the collaborations she’s seeing among local foundations, human service agencies, leaders and their teams, and foundations. Also helping is the vision shared by leaders in the community, including Syracuse Mayor Ben Walsh, Onondaga County Executive Ryan McMahon, CenterState Corporation for Economic Opportunity and the Manufacturers Association of Central New York.

She said it the most powerful way to move a community forward.

“Everyone is really thinking together,” she said. “That to me represents incredible reason for optimism and belief in the community.”

As president, Eaton said one of the best parts of her job is “having the opportunity to pick a really dynamic and talented team. I have the privilege of working with people who share a vision of the impact we’re trying to have in the community.”

Current efforts include a new marketing plan, which allows donors to know the impact of their contributions; an increased emphasis on partnerships; promoting greater community volunteerism, and increased education and advocacy programs.

“While the United Way is committed to people’s needs and creating ways to meet those need, for a community to be vibrant and thriving, we need a rich arts community. We need recreational opportunities,” she said. So, while the United Way does not fund the arts in the traditional sense, Eaton wants to see it help to connect volunteers with the arts, recreation or whatever their cause might be.

“I think, in a way, volunteering is a little bit like getting in shape. When you volunteer, you’re more energetic. Data shows that volunteers are happier and live longer,” she added.

That Eaton is passionate about her work is no secret to anyone who knows her, and part of that positive energy comes from her staff and the board, and knowing that they are all working together for the betterment of the community.

“My enthusiasm and excitement about being here is because I believe we can do more together. In my career in human services and in nonprofits, I have often found that when you have smart, caring people in the same room, the outcomes often aren’t on the agenda. They weren’t things that you gathered together to discuss; there are things that happened,” she said.

As she moves her team forward, she wants to help Central New Yorkers understand why a strong and vibrant United Way matters.

“I want people to know our United Way is at the table, ready to do research, ready to gather, ready to advocate for needs, ready to help people reduce stigma about getting mental health care, to help ensure the next opioid crisis isn’t one that has a huge impact on people, and most importantly, I really hope we are able to be part of this incredible time in our history — the history of this community — to really make it possible for every person born here and living here to learn to grow, to play, to thrive,  and we can do this,” she stated.