Last issue, I sang the praises of cursive handwriting and the importance of writing letters to our loved ones. The truth of that advice came home to me recently. 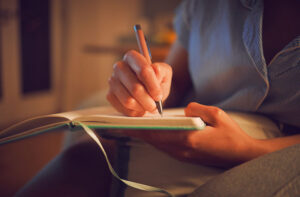 This would be the 100th birthday of my mother, Freida Bazan, born in February 1923.

If you asked me if I knew my mom, I’d say, “Of course,” andprobably think, “What a silly question.”

Sure, I knew my mom. I knew the taste of her specialty, scalloped potatoes; the smell of yeast as she baked her Polish braided bread; and the touch of her intricate embroidery stitches.

I knew her as a competent career woman, Girl Scout leader and a fan of Dragnet.

And though she left us too soon — I was only 30 and her first grandchild, a month old — I felt I really knew my mother.

Then, nearly 40 years after her death, I learned there was a side of my mom that I had never seen.

On the day of my daughter’s wedding, my cousin handed me a packet from Grandma’s attic — letters, their paper yellowed and brittle, smelling faintly of must. I fingered the 3-cent postage stamp with the Trylon and Perisphere, symbols of the 1939-40 New York World’s Fair. I could see my mother’s maiden name on the address line and the postmark — 1940.

I tucked the little packet away until after the excitement of the wedding, then one day I settled down with a cup of tea and that pile of letters.

I pored over them for hours, fascinated by the picture of the young woman who came to life as I read. I did quick math. My mother was 17 when these letters were written.

Apparently, she was the only one of her immediate circle to go away to college after high school. For a teenaged farm girl before World War II, that was a pretty impressive feat in itself. I knew my mother had gotten a business school degree, which landed her coveted positions as a bookkeeper, starting in the 1940s. But somehow, I never realized she was so young at the time.

The letters were written in the months after she graduated from high school and they came from three of her best girlfriends. The earliest were still full of high school intrigue. “Can you believe Edna got the Best Student award?”

The letters surprised me, as all letters from that generation did, by their beautiful handwriting, impeccable grammar and literary references. They were also full of French. Must be girls in that era felt it made them appear “tres” sophisticated.

The girls teased my mother for her “big city” life in Albany and her whirlwind social calendar. The letters asked about her dates — and mentioned one boy, “the Irish lad,” in particular. Apparently my mother had her share of suitors and enjoyed going out and having fun after classes.

The most eye-opening to me was the letter with the Trylon and Perisphere stamp. My mother’s friend was scolding her for taking the train by herself from Albany to the New York World’s Fair without letting anyone know.

She was right to be concerned. The fair took place on more than 1,200 acres of land and over the two seasons it was open, more than 44 million people attended from all over the world. And my mom was still a teenager at the time.

Suddenly, I had a new vision of her. In addition to the working mother who spent her days with numbers and ledgers, and her evenings sewing, crocheting and whipping up family meals; I now saw another side — the independent, sociable and most of all, brave, young woman who ventured from her parent’s dairy farm as a mere teen to forge a new life for herself and seek adventure.

Carefully, I retied the ribbon on that precious packet of letters, thankful for what they’d taught me about my mother and vowing to do better at leaving a written legacy of my own.

A quick online search showed me there are plenty of ways to do this and some very helpful resources. If you’re comfortable with writing stories, you don’t need anything more than a notebook or journal and a pen. No need to be fancy — a marble composition notebook and simple ballpoint will create a journal just as cherished as one bound in rich leather. You can handwrite letters or record your thoughts on a computer, but be sure to provide a written copy or even self-publish a book, either with a local printer or an e-book on a platform such as Kindle.

If coming up with ideas is holding you back, there are tons of books available that guide you through the process with questions like, “Who was your childhood best friend?” and “What is your favorite recipe to make for your family?’

Some are interactive, to do with a family member, giving the dual benefit of a written legacy and special time with a loved one.

Another double whammy is to gather some pictures of special moments in your life and use them as prompts to jog your memory and get those creative juices flowing. Paste the stories and pictures into a scrapbook or try the self-publishing route, to create a record your family can cherish for years to come.

A special gift is the sound of your voice to listen to in years to come. Make a video or just tell your stories into your cell phone’s microphone. For special family time, enlist a child or grandchild to interview you. There are online resources with questions to ask. Another option is Story Corps at storycorps.org, which saves a legacy of thousands of people’s voices for future generations. You can record your own story on their website and they have resources to help you do it.

It’s easy and fun to tell your life’s story. Grab a pen, a partner and a microphone, and leave your unique legacy for the future.