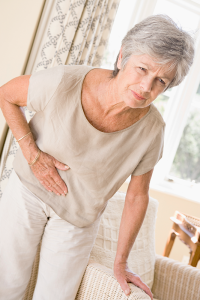 Have a bad stomachache, and the first thing that jumps into peoples’ minds is the appendix. Or constipation. But those are only two of many maladies producing belly pain.

Diverticulitis is one common cause of abdominal pain in mature adults. This disorder of the large bowel (colon) is acquired with age. Up to 60 percent of people over age 80 develop divericuli, little outpouchings of the colon. Fortunately, the majority never develop symptoms or problems.

Understanding this disease begins by considering the colon’s structure. This tubular organ has a lining called the mucosa, surrounded by a muscle layer. Arteries pierce through the muscle layer to supply oxygen and nutrients to the mucosa. Over time, the perforations that admit the arteries weaken and stretch. If the lining of the intestine bulges outward into these widened openings, small pouches, called diverticuli, form. Most affected people have multiple divericuli, each about one quarter to half inch wide. The presence of diverticuli is called diverticulosis.

About 15 percent of patients with diverticulosis develop abdominal pain. The pain is usually crampy, and may be relieved by passing gas or having a bowel movement. Eating sometimes precipitates attacks. The pain is typically in the lower left abdomen.

We’re not sure why some people with diverticulosis develop symptoms. Evidence suggests that people who eat a high fiber diet and exercise regularly are less likely to develop problems. Conventional wisdom advises patients with diverticulosis to avoid eating seeds, corn, popcorn and nuts for fear that these will lodge in the diverticuli, trapping bacteria and leading to infection. Caffeine, smoking and alcohol don’t seem to raise the risk of symptoms from diverticulosis.

About 5 percent of patients with dicerticulosis wind up with infection and inflammation called diverticultis. The initial symptom of abdominal pain develops fairly quickly. Most diverticuli are in the left colon so the pain is typically on the left. But the disease can occur on the right side too. Usually there is a fever, and blood work shows an increased number of white blood cells. Other possible symptoms are nausea, vomiting, diarrhea or constipation. If an inflamed diverticulum is near the bladder it may cause frequent and/or painful urination, symptoms that mimic a urinary tract infection.

The usual diagnostic test is a CT scan, which detects about 97 percent of cases.

People with mild diverticulitis are treated as outpatients with a clear fluid diet and antibiotics. Often two antibiotics are needed because a mixture of several types of intestinal bacteria causes the infection. The sickest patients need hospitalization for bowel rest (no food or fluids by mouth) and intravenous antibiotics.

The vast majority of patients hospitalized for diverticulitis recover without surgery. A few require surgery after failing to improve with antibiotics and bowel rest. A very small number develop serious complications.

Abscesses occur when the inflammation spreads beyond the tissues adjacent to the colon. Fistulas form when the inflammation erodes into a nearby organ, such as the bladder, producing an abnormal passageway between the bowel and the other organ. Obstruction, a blockage of the bowel, may result from scar tissue, from swelling that closes the bowel, or from an abscess that pushes the bowel shut from the outside.

Diverticular hemorrhage is the most common cause of major bleeding from the lower gastrointestinal tract. In fact, it can be the only sign of diverticular disease. It happens when the arteries that travel through the muscular wall of the colon are thinned where they pass through the diverticula. The bleeding starts abruptly, there is usually a large volume, and it’s painless. It’s treated in the hospital with fluid replacement and transfusion if necessary. Most diverticular bleeds resolve without surgery.