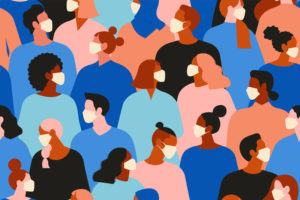 We have not seen a pandemic of this scope in more than a century. The 1918-19 influenza pandemic (known as the Spanish Flu) was until now the most severe in modern history. It was caused by an H1N1 virus with genes of avian origin.

In the United States, it was first identified in military personnel in the spring of 1918. It is estimated that about 500 million people or one-third of the world’s population became infected with this virus. The number of deaths was estimated to be at least 50 million worldwide with about 675,000 occurring in the United States. Back then, however, the U.S. population was just 103 million compared to today’s 330 million.

Although it was widely known as the “Spanish Flu,” it likely had its origins elsewhere. In its initial stages, western governments, including the United States, had an understanding with the news media to underplay the scope of the virus so as not to panic the population. In Spain, a neutral country that had no such agreement with its media outlets, the story was splashed across the front pages of its newspapers.

Both of my immigrant Italian parents were impacted by the 1918 pandemic. Before they met each other in Bethlehem, Pennsylvania, my father, Phillip, who later opened a grocery store in the anthracite coal region of eastern Pennsylvania, became seriously ill when he contracted the flu while working in a steel mill in Pittsburgh. Although many of his infected co-workers later died, my father made a full recovery.

My mother, Frieda, grandmother and three uncles, who came to the United States from Italy in 1919 aboard the ship America, were quarantined at Ellis Island for a week after the ship docked, because hundreds of other passengers had contracted the flu and some died. Luckily, my mother and her family were not infected.

She said, however, that she and her family members were panicked by the concern over getting the flu. Before their ship was scheduled to leave Genoa, Italy, sailors went on strike to protest the lack of protective gear, mitigation and safe distancing from thousands of immigrants who were fleeing to the New World.

When they arrived at Ellis Island, dead passengers were removed from the ship first, followed by those who were so weak that they could not walk and had to be removed by stretchers or mask-wearing immigration officials.

My mother said that she and her family members were marked with an “I” (for influenza) and were quarantined for a week to check for symptoms.

Even if worst case scenarios are borne out with the COVID-19 pandemic, our deaths will not rival those of the previously worst known pandemic to mankind — the Black Death (bubonic plague) of the Middle Ages. Remember, however, that health care experts are warning that cases and deaths will not come only during this first wave but will likely recur in subsequent waves this summer and fall and possibly into 2021 or later.

Our American hubris convinced us that a catastrophe of this scope and magnitude could never happen to us – not in 2020, not in the richest country in the world, not in a nation that is used to considering itself as No. 1.

Earlier in the year, we viewed with horror how the coronavirus had overwhelmed the northern part of Italy, including my father’s hometown, then spread to the rest of the country. Italian epidemiologists warned us that we would soon see here what we were seeing then in Italy.

We scoffed at the notion. No way. We had this under control. After all, President Trump assured us it was. In February and into the first part of March, the president constantly downplayed the threat and contradicted his own health officials, asserting that the virus was “very much under control’’ and infections were “going very substantially down, not up.’’ On Feb. 26, he proclaimed that total cases will be “close to zero”.

Now, we know the reality of the situation. Each day, we get somber statistics about the numbers infected and how many died. It reminds us of the daily body count we received during the Vietnam War.

Despite Trump’s comparing COVID-19 to the ordinary flu and saying for weeks that it would pass, he then claimed in April that he understood all along that it could be a killer of historic proportions. “I thought it could be,’’ he said. “I knew everything. I knew it could be horrible, and I knew it could be maybe good.’’

‘Our American hubris convinced us that a catastrophe of this scope and magnitude could never happen to us – not in 2020, not in the richest country in the world, not in a nation that is used to considering itself as No. 1.’

He implied that he misled us because he wanted to downplay the seriousness of the threat; he wanted to give us hope. “You know, I’m a cheerleader for the country,’’ he told us.

Most of us have seen the unsettling scenes of the bread lines of the Great Depression in the late 1920s and 1930s. We shook our heads and patted ourselves on the back saying we would never see scenes like that again. That was ancient history.

We have since seen the massive layoffs starting in early March lines of vehicles at food banks and other food-distribution sites as millions of jobless in New York state and millions more nationwide try to get the necessities of life.

Now, various states have begun to re-open gradually with the hope that it is not too much, too soon for fear that cases and deaths will spike once again.

Throughout history, the world has been horribly impacted by epidemics of staggering proportions.

As a French major, I was mesmerized by Albert Camus’s fictional novel “The Plague” (“La Peste” in French), which was mandatory reading for my three classmates and me in our French 10 college class.

When I recently re-read “The Plague,” which was set in the North African city of Oran, I wondered what it would have been like if such a catastrophic event were to have befallen my beloved adopted hometown of Oswego.

By some measures, we have been experiencing some of the unimaginable dislocations that the people of Oran faced in Camus’s 1947 novel. “You must picture the consternation of our little town, hitherto so tranquil, and now, out of the blue, shaken to its core,” Camus wrote.

Camus’s novel makes clear that this can happen anywhere at any time. Despite the historical presence of periodic episodes of epidemics and pestilence, each takes us humans by surprise, Camus observed. During the plague, Camus wrote about the physical and psychological infection that overwhelms a community.

Plague is spread by infected fleas on rats. When infected rats began appearing and dying on the streets of Oran, residents found it a nuisance and blamed sanitation workers for not removing them fast enough.

They, as we today, did not accurately diagnose the signs of what was about to happen, so they went about their daily routines. “In this respect, our townsfolk were like everybody else, wrapped up in themselves,’’ the narrator in `The Plague’ said. “They disbelieved in pestilences.’’ It shows how easy it is to mistake an epidemic for an annoyance.

At first, officials urged the public not to be alarmed. Oran’s prefect even suggested that it was a false alarm (fake news?). They insisted that what was happening was not the plague but a “special type of fever.” As the number of deaths exploded, the city’s leaders were forced to act.

They closed the city gates and mandated quarantine for affected patients. “The first thing the plague brought was exile,’’ the narrator said.

Camus’s intent was to remind us that any contagion can overrun a society, from a virus such as COVID-19 to an ideology such as fascism or totalitarianism, which can impact the entire population.

His other key message is the sobering realization that becoming infected is indiscriminate. Contagion is not limited to any segment of the population; it can affect anyone at any time. You can’t buy your immunity.

Throughout the ominous warnings, however, Camus has an inspiring observation: “What’s true of all the evils in the world is true of plague as well. It helps people to rise above themselves,”

All of us want to know how long this will last. Camus had the unsettling answer: We can’t know. All we can know is that this disruption will not last forever. “ It will go unaccountably when it pleases. And one day, others will emerge.’’