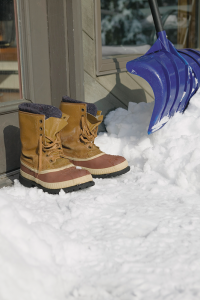 I don’t like falling on ice. Especially after breaking my ankle in an icy fall 20 years ago. When it’s icy, I try to remember to add Yak Trax, Katoohla spikes, or Neos overshoes to my boots.

But what if someone could design a less slippery boot in the first place?

In Canada, researchers are thinking along that line. Every year the Toronto Rehabilitation Center sees a lot of patients with hip and other fractures caused by icy falls. Their mission is not just to aid those people to recover, but to prevent injuries in the first place.

Researchers designed a test to uncover the best ice-gripping boots. They investigated 98 models of boots on ice and wet ice. Sadly, only nine boots passed muster. You can read about the test and see the ratings at ratemytreads.com. There’s a video, too, on YouTube www.youtube.com/watch?v=lOFgl9WzAcs

Testers are strapped into a full body harness inside a room whose floor is a solid, tiltable sheet of ice. The floor starts out level and the subject walks back and forth. Gradually the floor tilts at an angle. Eventually the subject starts to slip and slide. The harness prevents them from falling. From the video it appears they’ve strapped a mattress to the wall to ensure a gentle landing for the testers. The floor tilt angle just before the subject starts slipping is called the MAA — maximum achievable angle. The passing grade, which earns a one snowflake rating, is 7 percent. That’s the angle used for curb ramps in Ontario, and you’d want at least to be able to negotiate those ramps safely. To earn two snowflakes requires a MAA of 11 percent, and for three snowflakes the passing grade is 15 percent.

None of the tested boots made it to two snowflakes. And only new boots were tested, so the effects of wear aren’t known.

Two kinds of technology were used in the most slip resistant boots. Green Diamond is a rubber sole with aluminum oxide grit (often used in sandpaper) embedded in the material. Arctic Grip looks smooth but has microscopic crampons formed from glass-imbedded rubber microgrooves.

There’s still more work to be done. Are the boots effective in snow or snow-covered ice? And how long will the ice gripping soles remain effective with use?

If you plan to spend time outdoors this winter, staying outside longer than moving from building to car and back indoors, you’ll also want to make sure your jacket is warm. The most warmth for weight is goose down. But it’s expensive, it’s an animal based product, and it won’t insulate when wet. There are several synthetic insulating materials that come close to down in performance, cost less, are machine washable, and insulate when wet. Some examples are PrimaLoft, first developed in the 1980s for military use, and Climashield. A pair of Climashield booties kept my feet warm when camping on the Appalachian Trail last spring in temperatures well below freezing.

Only a few more months left until spring!