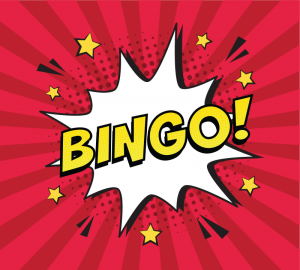 Gambling is not one of my main activities. Occasionally I buy scratch-off lottery tickets, but I rarely win anything. My favorite lottery ticket is the $2 Bingo Doubler ticket. Even though I don’t win, I enjoy scratching off the numbers and hoping for the best.

Recently, some friends of mine, Patti and Sam, lured me into playing bingo at Turning Stone Casino in Verona. I drove there from Syracuse on the Thruway, eager for a new experience. I parked in a lot outside the casino building and entered the casino and walked down a long hallway to the bingo hall. My friends arrived at about 11:30 a.m. and Patti guided me through the process of admission. There are three levels of rewards, $250, $500 and $1,000. I decided to go for broke and bought the highest level ticket, hoping to win $1,000.

I also got a new member card, in case I wanted to lose money on the slot machines. I received $10 of free play as a new member.

Long ago, I was at a casino briefly. Things have changed dramatically since then. Instead of putting pennies, nickels or quarters into the slot machine, the process is electronic. I slide my card into a slot, which immediately lights up in green. “Welcome Marvin” flashes on a screen. I select my bet and push a button. The machine does the rest. It took me less than three minutes to lose the $10 of free play on the slot machines.

The bingo hall is enormous and there were hundreds of players at long tables. When I saw so many players, I decided that my chance of winning anything was very slim.

I had a stack of bingo sheets and a booklet telling the order of the games. Each sheet had nine different sets of numbers. Each game was different. Sometimes, a winner had to fill in all the numbers. Sometimes, a double row, or cross pattern, would be a winner. A “caller” would use a spinning machine to randomly select balls with numbers from one to 75. The numbers would flash on a screen before being announced on a loudspeaker. If one of your numbers was called, you would stamp that number on your bingo sheet. The numbers were called at a fairly rapid rate, and I would sometimes miss marking a number. Patti sat next to me and corrected my errors. On one occasion, a lady sitting opposite me at the long table noticed that I missed a number and she told me so. I could barely read my numbers right side up, yet she spotted my error upside down from the other side of the table. I was told that Patti sometimes monitors two sheets at the same time. When playing bingo, experience counts.

I enjoyed observing the players. Apparently, many are regulars. We sat among such a group. Nobody won any bingos, but nobody seemed to care. They were there to play the game and not to win. I was there to win… but I didn’t.

No conversation was possible when the numbers were being called. Playing bingo was not a social experience. I like to talk to people, but I couldn’t. The rapid pace of the number-calling and the intense concentration required left me speechless — and sometimes confused. Without the help of Patti, I would have messed things up badly.

The casino offers free soft drinks, coffee and tea. There is a café nearby where food can be purchased at reasonable prices. Some people ate snacks and lunch at the table. I saw one person at another table reading a book while she played. I was so busy trying to keep things straight that I didn’t buy any food. I expected to play bingo for about an hour, and then go home. I stayed for all the games, until they ended at about 4:30 p.m.

If you have problems, bingo at the casino will ease your anxieties. You become absorbed in the games, and there is always that glimmer of hope that you may win big.

As usual, I found that people were very nice and friendly. The regulars would play stone-faced, until someone yelled “bingo!” Then, there was a slight murmur of excitement in the room. Nobody really seemed to expect to win. They were just there to play, and — perhaps — forget some problems at home or at work. Bingo is excellent mental therapy. Your mind is too busy focusing on the bingo sheets to think about anything else.

There was an attendant in each area of the room. During the course of the games, a giant wheel was spun with the names of the attendants encircling it. If the wheel stopped at your attendant’s name, everyone in that area would win five bingo dollars that could be put toward admission in the future. The spin of the wheel stopped at “caller.” Which meant that everyone playing bingo received five bingo dollars. I was thrilled to win something.

When I left the casino, I couldn’t find the parking lot where my car was parked. I roamed around for about 20 minutes, until I spotted a parking valet. He escorted me to my car. Instead of giving him a monetary tip, I gave him one of my trademark magnifiers in a plastic case. “It’s worth more than money,” I told him.

Then, I pushed my favorite button on my GPS (named Carla), i.e., “Go home.” Carla guided me along the Thruway to Syracuse, while I listened to the Beatles on Sirius radio.

I find it a bit depressing to gamble, mainly because I never seem to win any money. Once, in Las Vegas, I played slots in a casino. I said to a cab driver, “Gee, everyone seems to win, except me.” He replied, “If everyone won, there wouldn’t be a Las Vegas.”

Some people are lucky and do win money, but, in the long run, the casino wins overall. Despite my lack of success, I could immerse myself in the games, and I may well go again. When playing bingo, I decided that I didn’t lose money. I just don’t win any. A positive, optimistic attitude helps. Be confident — and lucky — and you may win something after all or, at least, get your mind off any troubles you may have.