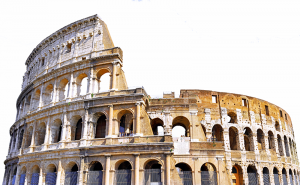 That is the extent of my knowledge of Italian, but I traveled to Italy with a companion anyhow. It turned out that most people we met spoke English.

It is common for people in other countries to be bilingual, but it is not common in the United States. We drove to Toronto to get an Alitalia Airlines flight direct to Rome. Usually, the customs officers at the Canadian/U.S. border are grim-faced and serious. I prepared myself for the usual questions, i.e., “Where are you from? Are you carrying any weapons or drugs? Where are you going?” When asked where we were going, I replied, “Italy.” With a solemn face, the customs agent replied, “Which boat are you taking?” He was actually telling a joke. I didn’t know whether or not to laugh.

For the first time in my life, I flew business class. I highly recommend it. My seat was like a robotic coffin. By pushing buttons, I could get the seat into any position. When I had to go to the toilet, I couldn’t figure out which buttons to push to enable me to stand up. My companion came to my rescue.

A tablecloth was put on the table, and drinks and food were very good and plentiful. There was even a hot towel for refreshment. The stewards were incredibly handsome and I’m sure every woman aboard instantly fell in love with them. I watched three modern movies while the plane zipped across the Atlantic, uneventfully.

Another luxury of being in business class was that we could use the KLM lounge, where drinks and snacks were abundant. I greedily devoured all the free food that I could eat, and became ill from eating a very creamy potato salad. I fought the nausea and survived the experience.

If you have not planned a trip to Italy, plan one. Everyone we met was friendly, pleasant and helpful. In Rome, we only had time to visit the Vatican and the Colosseum. It was a bit frightening to see many vigilant soldiers armed with machine guns. By contrast, we hardly saw any police or military in Florence or Venice.

We took a train from Rome to Florence and then from Florence to Venice. The train ride was fast, scenic and pleasant. Florence was spectacular and packed with young students and art galore.

The works of Michelangelo and Leonardo da Vinci were everywhere. We visited the Syracuse University Study Abroad Center in Florence. Six buildings housed art facilities for students and it was obvious why students would choose to study in Florence.

We were thrilled to see the magnificent 17-foot-high (5.17 meters) sculpture of David by Michelangelo. We were told that once you have seen this sculpture, you don’t have to see any others.

You do have to be very careful guarding your wallet and passport. We met a Syracuse University faculty colleague in a museum in Florence and he told us that his wallet had been stolen in Rome. He took the wallet out of his pocket to buy an umbrella. When he reached for his wallet a few minutes later, it was gone.

Two ladies told us that they had a group of eight women who travel to a different country each year for a vacation. They rented a van in Rome. They went into a restaurant for lunch and when they emerged, their baggage and the entire contents of the van had been stolen. The message was clear. Guard your valuables, especially when in Rome. I had a scan-proof passport holder that I wore around my neck.

When we got off the train in Venice, we both had a heavy suitcase and a backpack.

Young boys with carts immediately besieged us, offering to transport our luggage to the hotel.

I was fearful of being scammed by these porters, so I decided that we would carry our own luggage to the hotel. We had to climb 40 steps up and 40 steps down to cross the Grand Canal. My companion was struggling with her luggage, when a tall, muscular stranger from England took pity on my companion and said, “I’ll help you with that.”

He picked up her heavy luggage and walked up a few more steps. Then, he stopped and turned around to me and said, “I’ll help you also.” He picked up my suitcase, and easily carried both heavy bags over the canal.

I was a bit insulted. I should have said, “That’s OK. I can handle it myself,” but I didn’t say anything except, “Thanks.”

All the hotels on our trip were excellent, and they all came with a hearty breakfast. The hotel in Venice was like a palace, and even had a round, king-sized bed and a glassed–in bathroom. Open the window and we could observe gondolas moving along a branch of the Grand Canal. We did keep the windows closed, because the foul smell from the dirty water of the canal was distasteful.

We did not take a gondola ride, because it looked too commercial and crowded. Instead, we traveled on a water-bus that stopped at many places along the Grand Canal.

Italian restaurants were sensational. Every pasta dish was freshly made, and pizzas were the way pizzas should be. I generally don’t like to eat in very fancy restaurants. In one such restaurant, they served my companion five small raviolis in a very large plate for a very high price. I had a chunk of cooked veal that looked like a piece of the calf’s leg. A small sliver of cake on a large plate was the climax dessert at a high price.

Handling money in Italy was easy. ATM machines were available for quick cash and credit cards were readily accepted everywhere. A Euro was worth $1.12, so I treated Euros like dollars. I found a Flying Tiger store that was like a fancy dollar store, with durable, novelty products from Denmark. I even found a 99-cent store in Florence, thus satisfying my shopping needs. My companion luxuriated in the many leather shops.

The flight home was uneventful. The greatest problem encountered on this trip to Italy was the time change of six hours. I never knew whether it was time to eat or sleep. It took several days to readjust our time frame in both directions.

Our trip to Italy was like a pleasant dream. Like other wonderful experiences in life, it ended too soon.