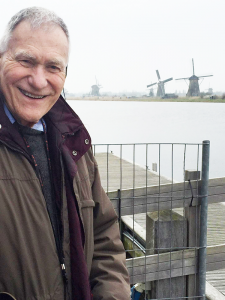 How about a river cruise vacation? Why not?

Older people should be seeking new adventures and this was one I had never experienced. So, I gathered my girlfriend, Victoria, and off we went on a river cruise of the Rhine River.

We set off flying from Syracuse to Philadelphia and on to Amsterdam. We decided to spend two days in Amsterdam before embarking on the river cruise. As usual, I over-packed and brought a large suitcase and a gym bag stuffed with clothing and books, most of which I never used on the trip.

I checked my large bag at the Syracuse airport and intended to carry my gym bag aboard the flight. An agent stopped me at the gate and said, “I can check that bag for you.” So, I checked my gym bag, not realizing that my passport was in the bag. When we got to Philadelphia, the agent told me that I couldn’t board the plane to Amsterdam without a passport. The head of airport security showed up and decided that the staff should look for my bag aboard the plane.

This was a difficult task, since the agent who took my bag failed to give me the baggage receipt. Meanwhile, the plane was fully boarded with passengers. Amazingly, they eventually found the bag, delaying the plane’s departure for almost an hour. When we finally got on the plane, grim faces and ominous silence greeted us.

The flight was uneventful, but we were faced with the problem of how to sleep and endure seven hours in cramped conditions. This is a common complaint of experienced air travelers. Where do you put your head and your feet? Can you sleep at all?

After seven hours of intermittent dozing, we arrived in Amsterdam and spent two days exploring the city. We visited the Rijsmuseum and Van Gogh museum and took a boat ride on the canals. Many years ago, I taught a history of biology course in Amsterdam and I lived on Valeriusstraat.

We found the street where I lived and spent a lovely afternoon sitting on a bench on the street. We walked through Vondelpark, the largest city park in Amsterdam, and old memories were revived. We had dinner at an outdoor restaurant near the corner of Valeriusstraat. Everyone we encountered in Amsterdam spoke English.

One memorable feature in Amsterdam were the Dutch fries. We saw a long line waiting to buy something. We joined the line and bought two paper cones full of thick, delicious Dutch fries. A variety of toppings were available. After devouring a cone-full of these fries, it was impossible to have any dinner.

Roaming the infamous Red Light district was another memorable experience. Sparsely dressed, voluptuous women stood inside the large windows, beckoning to passersby. I wondered what kind of exercise these women did to keep their bodies in such good shape. The area was seedy and was packed with tourists, so we didn’t stay very long.

Of course, the Anne Frank house is a major tourist attraction in Amsterdam. Since both of us had been there before, we did not visit this site where Frank and her family hid from the Nazis in World War II.

The most conspicuous feature of Amsterdam was the large number of people riding bicycles. We sat on a bench in Vondelpark and watched bicyclists with babies lashed to their backs, one-handed riders, cell phone cyclists and even riders with no hands on the steering bar. They made bicycling look very easy.

In Amsterdam, we also visited the Museum of Bags and Purses. There, visitors are treated to a collection of thousands of handbags and purses that date back to the 16th century.

We boarded the ship after two days of exploring Amsterdam. It was late afternoon and passengers were drinking cocktails. I bought a drink for Victoria and was surprised at the high price.

Wine and beer were available free at lunch and dinner, but the cruise offered a drink package that enabled you to have a drink at any time. On impulse, I decided to buy the unlimited drink package for almost $400 per couple, even though I rarely drink alcohol. That night, I thought about it and decided to try to cancel the drink package.

Since wine and beer were free at meals, there was no way Victoria could consume many drinks in between without becoming an alcoholic. The agent at the service desk said that I couldn’t cancel the package. Meanwhile, Victoria had befriended the ship’s program director. She told him about my plight and he said, “I’ll see what I can do.” He arranged cancelation of the drink package. Whew!

The ship was modern and luxurious. The meals were fantastic. Each day, a tour left the ship and explored the sights. Cathedrals and castles were high on the agenda. As interesting and beautiful as they are, my view is that if you’ve seen one castle or cathedral, you’ve seen them all. The most unusual tour was in Kinderdijk-Elshout in the Netherlands. This small village has a network of old wooden windmills, used for pumping water and water management. Someone had the brilliant idea of making the windmills a major tourist attraction. We found out all about windmills, and it was fascinating.

In Cologne, Germany, we visited a building that was Gestapo headquarters during World War II — the National Socialism Documentation Center. This building was turned into a comprehensive museum about World War II and the rise of Hitler’s regime.

Prison cells were still intact in the basement and there is a courtyard where prisoners were executed.

The last shore excursion was the Black Forest in southwest Germany. Optional tours included a cuckoo clock-making presentation and a session on how to make Black Forest cake. Instead of these options, we chose to go on a brief hike of the area. Although the Black Forest is picturesque, I think the scenery in Central New York is far more beautiful.

There was a lot of tipping requested. There were suggested gratuities for the ship staff, the program director, the bus drivers and the tour guides. I don’t mind giving tips for good service, but I prefer all-inclusive trips where all tips are included in the total price of the trip. Otherwise, you are constantly tossing tips to everyone in sight, and it becomes a nuisance. Sometimes, you have only bills when all that is needed are a few coins.

After seven days of luxurious living aboard the ship and many land excursions, we set out for home. We were supposed to fly from Basel, Switzerland, to Philadelphia and then to Syracuse. When we reached Philadelphia, we were told that the connecting flight to Syracuse was cancelled because of a storm in Syracuse. It was about 8:30 p.m. I booked the next flight to Syracuse for 5 a.m.

Meanwhile, Victoria had a cold, an eye inflammation and an ear infection. Ordinarily, I’d brave it out and sit in the airport seats overnight. But Victoria didn’t feel well, so I tried unsuccessfully to get a hotel room. I told our plight to an information agent at the airport. “I’ll help you out,” he said. He walked us down a long corridor in the airport where about a dozen people were sleeping on cots.

An airport worker unfolded two cots, and gave each of us a pillow, blanket, toilet kit and a bottle of water. So, we were able to get some sleep while waiting to board the morning flight to Syracuse. I truly came to believe that Philadelphia is the City of Brotherly Love.

The flight to Syracuse was delayed. A very young pilot finally showed up and we boarded the plane. He zoomed through turbulent air and flew us to Syracuse in what seemed to be record time. I met him at the Syracuse airport and said, “As soon as I saw you, I knew we would have a cowboy ride.” He laughed.

Our river cruise adventure was over. It was a bit sad that the trip had ended, as all things eventually do. But we were left with rich memories and a desire for more such adventures in the future. So, if you have never taken a river cruise, do it. You won’t be sorry.