Experiencing the death of a loved one is not a pleasant experience.

I was at her bedside when I experienced the energy suddenly disappear from her body.

After 56 years of a wonderful marriage, the love of my life was gone.

I was in total shock and I was at a loss about how to cope with this tragedy.

Pat had managed the household and I knew little about handling money, doing the laundry, cooking and doing the little things in life that made life livable. Although Pat was the head of the household, she also was an administrator at Syracuse University and was involved in numerous other activities such as sewing, quilting, being a docent at the Erie Canal Museum, an AARP tax consultant, a member of the Friends of Jowonio Preschool Board, an active member of Women of the University Community and other involvements.

I did not fully appreciate Pat’s contributions to my life and to the lives of others until she was gone. The family was very supportive, but they were also in a state of grieving. I was a lost, helpless soul.

I discovered that Hospice of Central New York offered free counseling for the bereaved for a year. My optimistic belief has always been that “free is good.” So, I made arrangements for personal counseling at hospice. This was a major step for someone who has grown up believing that real men don’t cry and that it’s a sign of weakness to seek psychological help from a counselor. I met with the counselor once a week. At the sessions, I cried buckets of tears, as I talked about my relationship with Pat. 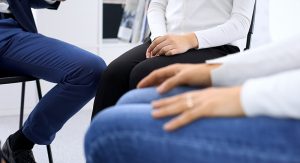 The counselor suggested that I join a support group that consisted of others who had lost a spouse. The group met on Monday afternoons and I decided to give it a try. The group consisted of a handful of men and women from all walks of life. We sat in a small circle and each week, everyone reminisced about their lost loved one. There were lots of tears.

Despite the diversity of backgrounds, there was a strong, hidden bond among members of the group. We all shared the same deep feeling of emptiness and grief. Each person reviewed their loss each week, each story was heartbreaking. None of us could really believe that our spouse had actually died and each person was emotionally still tightly bound to their spouse.

Talking about our loss did help ease the pain. But, after a number of meetings, I began to see a new role for myself in the group. I wanted to help the others cope more effectively with their loss. I started telling jokes and bringing articles and poems to the meetings. I felt good when everyone entered the room with depressed facial expressions and tears, and left the room laughing. By trying to help others, I helped myself. My grief became refocused on their grief. This was true for others as the group evolved and grew larger with new additions of grievers.

Then, my granddaughter wrote a profile and registered me on an online dating service. Her comment was, “I didn’t lie about you, but I’m just not saying things about you that people wouldn’t want to hear. I’m making you marketable.” Then, she said, “Grandpa, I’m tired. I have to take a nap.”

She lay down on the sofa and went to sleep. I was flattered to see that a number of women almost immediately contacted me and wanted to meet me. I arranged to take these different women to lunch and, at one time, I was dating about seven women. Even though friends had warned me that there are weird people on online dating services, every woman I dated was friendly and nice. The commonality was that each woman was alone and seeking companionship. I wrote several articles for 55 PLUS magazine about my dating adventures. You can find them online at www.cny55.com — then type “druger” in the search menu. They were intended to provide insights about this modern, online dating phenomenon.

At the weekly support group meetings, I began to tell stories and joke about my dating experiences. Everyone seemed to enjoy these dating tales, except the counselor leading the group. One day, after a meeting, she took me aside and said, “Marvin, don’t talk about dating. These people are here to grieve.”

My feelings were hurt. After all, I was just trying to be funny and cheer up people. I had no intent to hurt feelings or offend anyone.

After each meeting, the group had started to go to Dunkin’ Donuts to continue our interactions on a cheerful note. After the counselor scolded me, I went to the gathering at Dunkin’ Donuts and announced, “I’m not coming to the meetings anymore. The counselor said that you are there to grieve and not to laugh at jokes. So, I don’t want to upset the goal of the meetings.”

Unanimously, the group objected to my leaving. One woman looked me in the eye and said, “You’d better be there next week.” So, I continued to attend the meetings. Whenever any new woman joined the group, there was always laughter when I would announce to her, “Do you want to go to lunch?”

Once, I came late to a meeting. The group was arranged in a circle. There were two empty chairs in the circle. One empty chair was between two women; the other was between two men. Of course, I sat in the chair between the two women. Everyone laughed. They had made a bet about where I would sit.

At another meeting, I arrived late, and there was a circle of the group and one chair in the far corner of the room with a large sign on it saying, “Marvin.”

Everyone seemed to agree that laughter helped relieve grief. There is humor in everything. Laughter does alleviate the pain, even if for a brief interval.

By this time, the support group had grown to more than 20 people who had lost a spouse. Dunkin’ Donuts became known to the group as “Hospice II.” We assembled there after each official meeting. We started having official meetings every other week, and we all went out to lunch on alternate Mondays. Social activities became more prevalent. I had several all-day potluck sessions at my house near Owasco Lake. Members of the group played poker, went to casinos, had local get-togethers, and even played pickleball. This game is a combination of tennis, badminton and ping pong, but wooden paddles are used and the ball is plastic and perforated like a Wiffle ball.

Romances sprung up within the group. I was sitting next to one male participant at a lunch and he was talking on the phone to a female member who was in the hospital. “Yes, honey. Miss you. Love you.” I had no idea that this relationship had developed, as well as others.

One of the main points of this article is to demonstrate that new friendships can develop, even when we are older. The members of this support group have become close friends, and we feel like the group is an extended family that has been together for about seven years.

Everyone sincerely cares about the others in the group. If someone becomes ill, that person is besieged by reassuring phone calls and visits.

I didn’t think I could make new friends at my advanced age. Yet, I feel close to each member in the group. The group has evolved from a small cluster of mourners to a large social group with happy activities.

I think what bonds the group together so closely is the common loss and grief that we all share. That grief is embedded in each of us; but the need to express this grief aloud no longer seems as necessary.

I don’t miss the meetings where, each Monday, each member relived their loss and became depressed. Now, we are all good friends, coping with a tragic loss, but moving forward to new adventures in life.