All great festivals depend on volunteers and many of the original volunteers have turned over their knives and stirring spoons to a new generation. Therefore, though the people interviewed for this article are mostly not old enough to be featured in this magazine, the recipes and organizations do qualify.

One of the young ‘uns is Grace Khairallah, from the Middle Eastern Cultural Festival put on by St. Elias Church. “When my husband took over as chairman of the festival five years ago, I got involved in the cooking end. I am Lebanese and brought my own recipes with me.”

Even though she now cooks for hundreds of people, “when I first got married, I didn’t know anything and had to learn from the basics on up.” A registered nurse, not working at the moment, Grace learned to cook from her mother, mother-in-law and sister-in-law.

“My favorite dish is tabbouleh and I make it all the time. It is one of those dishes that are made differently by different cooks. For instance, I use Italian parsley and a specific type of tomatoes, Campari. Depending on the ratio of parsley to tomato, the dish can be mostly green or more red. I then finish it off with fresh lemon juice and the best olive oil I can get.”

Being a failure at anything with parsley, I took the opportunity to ask Grace how she gets the dirt out and I will pass this tip on to you.

“Fill the sink with water and white vinegar and put in the parsley; soak for a half hour and most of the dirt will fall to the bottom. Then fill the sink with just water. Soak for 10 minutes and then give it a good shake. Dry on a rack set on top of a towel for half to one hour. Cut the stems after drying.”

“I consider myself more a cook than a baker,” says Grace, “and I usually cook most of my dishes with lamb that I buy by the box from Samirs. Though I make a number of lamb dishes, I’m going to give you one that you probably won’t have from other cooks — baked lamb shanks with vegetables.

Pat-dry lamb shanks and rub seven spices on all sides and fry for three minutes on each side or till browning. Then take out of the skillet and arrange the lamb shanks in a pan.

Add the cut vegetables and cover up with the tomato paste dilute with salt.

Cover the pan with aluminum foil and cook in the oven for three hours on 400 F. Then uncover the pan and cook for an additional 30 minuts.

Enjoy with a side of couscous or cooked rice with vermicelli.

When asked where she learned to cook, Stephanie Armatas said she learned from her mother. “And you’ll get that answer from any Greek — our mothers, grandmothers, godmothers. Sundays are family days and we always cook a very traditional big meal as a family, my father and brothers joining in as well. Cooking is love and love of cooking provides camaraderie.”

“This would have been the 47th year of the Syracuse Greek Festival and my father and my godparents were among the earliest organizers. We all grew up cooking for the Greek Fest and have carried on that legacy from our parents. Many of us are second and third generation and now we also have the next generation cooking with us. They love, appreciate, and value the tradition.”

When asked what dish she is best known for, Stephanie said baklava. “It helped put me through college. My father had a food stand at the New York State Fair and each of us children managed a part of the booth — we had to make and sell our own product and that money went towards our tuition.”

“My favorite things to cook though, are grape leaves or spanakopita, as those were the first things my mom taught me to make. When I cook them, I feel her presence.”

Stephanie loves to travel, whether for business for Bank of America, where she has been for 30 years, or for pleasure. And having family there, she often goes back to Greece. 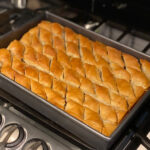 Chop walnuts finely and toss with cinnamon. Set aside.

Unroll phyllo dough. Butter the bottoms and sides of a 9×13 inch pan. Place two sheets of dough in pan, butter thoroughly. Repeat until you have 8 sheets layered.

Sprinkle 1/3 of walnut mixture on top. Top with two sheets of dough and butter. Repeat two more times, using 1/3 of walnuts for each layer.

Use remaining sheets to create top layer. Buttering between each layer of phyllo, for about 6 – 8 sheets.

Using a sharp knife cut into diamond or square shapes all the way to the bottom of the pan.

Make a simple syrup while baklava is baking. Boil sugar and water until the sugar is melted. Squeeze in lemon and add honey. Simmer for about 20 minutes. If you have whole cloves and a cinnamon stick add some while simmering the syrup for added flavor.

Remove baklava and let it cool completely. When ready to serve, warm the syrup and pour over the baklava. Cut and serve. 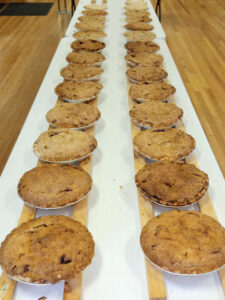 At the age of 8, Marla Jabbour joined 4-H and learned to cook and sew with her troop. With her blueberry muffin recipe, she entered contests in the town fair near Canandaigua and still remembers the admonition to ‘not stir too much as you get air bubbles.’

“Sure enough, the first time I stirred too much, the blueberries burst. But I did learn to cook from scratch and that is the same way we cook at the LaFayette Apple Fest. It doesn’t take that much longer than using mixes.”

Having left full-time work, and, “after painting every room in the house, like lots of volunteers, I needed to find something to do.” In addition to volunteering to cook, she also works as a part-time secretary at the church. “I am not the heart of the church; I am just the person who answers the phones and speaks with the media. I am one cog in a finely-tuned machine and credit should go to the efforts of the many people who wish to remain nameless. They volunteer their time for the apple pies, chicken barbecues, chicken and biscuit dinner and election night dinner.”

“In non-pandemic times we have our annual Cookie Cafe [December] and A Taste of Chocolate [February] events where our wonderful bakers make hundreds of cookies and chocolate confections to raise money for the LaFayette outreach food pantry. Those have been postponed during the pandemic.”

“The following recipe is from our election night dinner,” explains Marla, “for which I make the potato rolls. The recipe I use is from Brother Rick Curry’s book, “Secrets of Jesuit Bread Making.” And my secret for making large batches of rolls? Instant potatoes.”

In a small bowl, or a cup liquid measuring cup, stir 1 tablespoon active dry yeast and 1 teaspoon of granulated sugar into a half cup warm water [105-115F] and set it aside for five minutes to proof.

Add 3 large eggs and the proofed yeast. Beat the mixture vigorously for 10 minutes. Gradually mix in [1/2 cup at a time) about 6 ½ cups of all-purpose unbleached flour until the dough pulls away from the side of the bowl. Cover the dough with a sheet of plastic wrap and let it rise till double. Lightly flour a clean work surface and turn the dough out, kneading the dough for 8-10 minutes until it becomes smooth and elastic, adding flour as necessary to prevent excess stickiness.

Grease a large clean bowl and set the kneaded dough in it and cover with plastic wrap. Put the bowl in the refrigerator to rise overnight at least 8 hours.

Grease or line a baking sheet with parchment paper and dust it with cornmeal, or prepare muffin pans. Cut the dough into pieces [40 rolls] and shape the pieces into balls or other shapes. Brush the tops of the rolls with melted butter, cover the pan or pans with a towel and let the dough rise one more time for about 1 ¼ hour, until doubled in size. Preheat the oven to 325 F. Bake the rolls for 20 minutes or until they become golden.