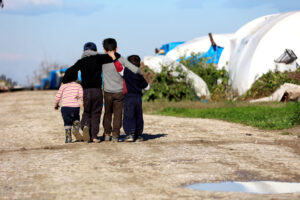 Ukraine is a beautiful country and has stood as one of Europe’s gems for centuries. It has always kept close ties with its next-door neighbor Russia. Many of Ukraine’s people speak Russian and vice-versa. Many families are intertwined with both countries.

Last February, Russia invaded Ukraine with little cause other than losing political influence with western European countries. Major cities have been bombed to rubble and millions of people have been driven from their homes and families. The world is in turmoil trying to avoid World War III; but it looks like we are headed that way. Ukraine has overwhelmed her neighbor Poland with refugees that have migrated and created a crisis for food, clothing and shelter. The threat of another world war has spread through the western hemisphere.

Before Russia’s unwarranted and criminal attack on Ukraine, the U.S. had opened its southern borders to South America and Mexico which in turn opened the door to the Caribbean Islands, Cuba, and most of the Western Hemisphere.

From the days of the Pilgrims escaping from Europe, the U.S.  has always been the beacon of liberty and freedom for those who wish to work for it. Unfortunately, we have our hands full right now helping Ukraine fight off the criminal attack by Russia. The U.S. is sending military machines, ammunition and people to train how to use the materials. Our country has pledged to give full support, financially and otherwise, until Russia’s attack to take over Ukraine is defeated.

The Middle East has also donated its share of disenchanted citizens. Our country’s sloppy withdrawal from the war in Afghanistan has produced many terrorists who are willing to cause upheaval in unstable countries like Turkey and Iraq (for a price).

We must put a stop to global wars before they destroy mankind. Our world has developed the technology, through satellites and drones to destroy anything on earth that threatens our way of life. It all depends who has their hand on the button.