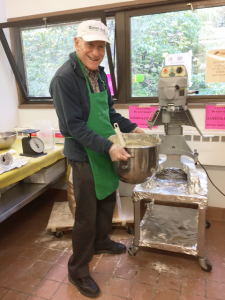 As we get older, new experiences tend to become rarer. “Been there, done that” becomes more common.

For example, I recently visited the National Baseball Hall of Fame in Cooperstown for the first time. I expected to be thrilled by the exhibits, but I came away with the feeling that “if you’ve seen one baseball bat, you’ve seen them all.”

This was also true of my visits to many churches in Europe. Each one was uniquely beautiful, yet the stained-glass windows and pillars and adornments seemed redundant. I have done so much in my lifetime that I wondered if there could be any really new, exciting experience.

Such an experience occurred recently when I went to the Beaver Lake Festival with my companion, Victoria.

This two-day festival is held in September and has been an area highlight at Beaver Lake for many years. The festival is chock full of activities, contests, arts and crafts, food and entertainment. Highlights include a farmer’s market with fresh organic vegetables for sale, hayrides, a petting zoo, a pie-eating contest, a living scarecrow contest, a variety of bands, many arts and crafts booths, food items galore, many other activities and, perhaps, best of all, free parking.

Victoria had volunteered to help in some capacity at the festival. She was assigned to the stand that sold homemade doughnuts for 75 cents each. I decided to be an assistant volunteer.

I expected to be at the counter selling the doughnuts and chatting with the many customers. Instead, we were assigned to mixing dough for the doughnuts. We reported for duty in the main building and were led through a maze of rooms to a small room with four sinks and a huge mixing machine. There were several large bags, like weed and feed bags, that were full of flavored doughnut dough.

They gave us an apron and a cap and a pair of vinyl gloves. The manager of the doughnut concession then demonstrated the process for mixing dough for the doughnuts. The woman who preceded us gave a sigh of relief as she left us for our shift of several hours. For me, being isolated in a small room with an assignment that seemed too complicated for someone whose cooking skills are limited to making hummus and hotdogs was intimidating. Victoria and I felt the same way, but we faked confidence. “No problem,” I told the manager.

Then the task began. I had to fill a large beaker with water from a hot and cold faucet so that the final temperature was exactly 80 degrees Fahrenheit. I had a small food thermometer to measure the temperature. Victoria scooped out two five-pound batches from the large bag and dumped them into a large mixing machine metal bowl. I then added the water that I had heated to 80 degrees. We had to attach the stirring device to the machine and lock it in place. Then, we set the controls to mix the batch for one minute at slow speed. Then, we again stirred the mix, but at high speed for two minutes. Then, I disassembled the stirrer and put the bowl of mixed dough on a platform from which Victoria could spill the mixture into a large metal pot. The pot was allowed to stand for several minutes. Then, John, a retired policeman who was also a volunteer, picked up the pot of mixed dough and carried it outside the building to the doughnut stand.

We had no idea what happened at the stand, but John would soon reappear with an empty pot and wash and sanitize it thoroughly in three sinks. He then would give us the pot to refill with another batch of mixed dough. This process was repeated many times until all the large bags of doughnut dough had been emptied.

This was a new experience in life.

It was exciting to know that there would be no doughnuts if not for our mixing the doughnut dough. We were the invisible core of the entire enterprise. Our only mishap was that the stirrer got stuck in the machine twice and John had to use his brute strength and experience to remove it. After many hours of mixing dough, we ran out of flour and were told to “enjoy the festival.” We found our way to an exit in the building and emerged into the fading sunshine, just as the festival was ending.

Doughnuts and cider were very popular at the festival, and we wanted to see what happened to our doughnut dough mixtures. The volunteers at the stand showed us. The mixed dough was put into a machine that shaped the doughnuts with a hole in the middle. Then, the doughnuts were place on a grid and fried in oil. The doughnuts were fried on each side for a few minutes. Then, they were dipped into a large bowl of cinnamon sugar.

We were each given a sample doughnut as a reward for our essential core work behind the scenes. The doughnut was truly delicious and we had a proud and satisfied feeling of accomplishment. We also had dough all over us.

You may think this was a trivial experience, not worth writing an article about. Yet this dough-mixing was something that I had never done before in my entire life. It was thrilling to have an experience that was brand new. It was gratifying to realize that there are always new experiences that are available in life. Old dogs can, indeed, learn new tricks. As we move through this brief period called “life” we should all seek new experiences and make the most of them.

You, too, can learn how to make dough for doughnuts.