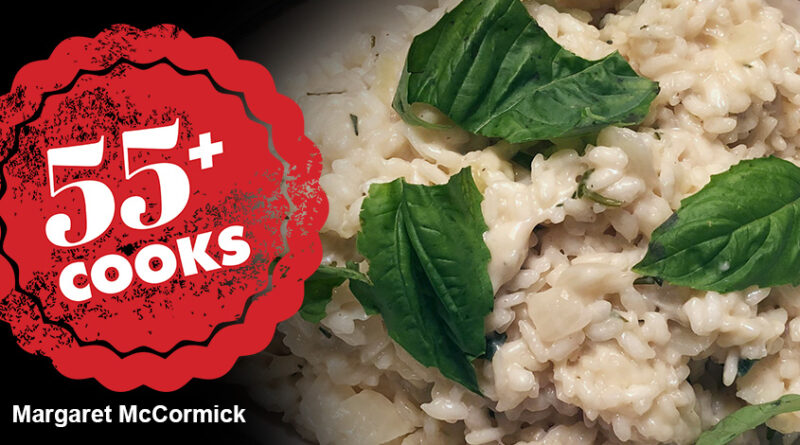 For Mark Cole, hosting and preparing dinner for guests is like a theater production — something he knows very well.

First, he considers the season and chooses his players, the ingredients, accordingly. Next, he thinks about scripts (recipes) for the occasion, and acts, or courses. Before the curtain rises on his entrée, there might first be a seasonal soup or salad and a loaf of homemade bread. After the main course comes an intermission, to clear the set and set the stage for the finale (homemade cheesecake, perhaps, or chocolate mousse or a seasonal fruit dessert).

Everything is well rehearsed, but he always leaves room for improvisation.

Cole, 70, of Oswego, is a playwright, actor and director. He retired from SUNY Oswego in 2014, where he served as a professor in the theater department for 35 years. He also served as department chairman from 1995 to 2009.

He learned to cook from watching his father, “an inventive cook,’’ and his mother, an enthusiastic baker, and got a “crash course in cooking’’ as a college junior, while doing summer theater in Auburn.

“The 18-member troupe lived in a double house. I, who lacked culinary skills but was a quick learner, volunteered to work with an experienced cook to plan and prepare the dinners. We stocked the kitchen with suitable breakfast fare and folks were on their own for lunch,’’ he recalls. “The director insisted that the group dine together every night of the week. No matter how time-consuming our rehearsal days were, the communal time at dinner was a sacrosanct ritual. We sat around three tables pushed together for a meal at 5:30 each day. So in addition to the shows we put on, four musicals in 10 weeks, dinner was also a production.’’

As a graduate student in New York City in the 1970s, Cole cooked simple meals for himself. His busy work schedule and evening show schedule didn’t allow for the preparation of elaborate meals, but he continued to collect recipes. He began cooking in earnest again after his father died in 2005, for both his mother and him. “Since my work often took me out in the early evening for theater rehearsals, I was adept at whipping up a fast dinner for my mother — like broiled fish or a pasta dish.’’

In retirement, Cole continues to explore new sources for recipes and take chances on them. He enjoys the planning and prep time as much as the meal itself.

How would you describe your cooking style?
“Living in an area that is known for the drama of the seasons, my approach or style relates to seasonal produce. I try to capitalize on what is available locally. I also like to be well-rehearsed, knowing that improvisation may be a necessity. I also enjoy recipes that use plenty of herbs. For me there can never be enough rosemary or tarragon.’’

What’s your favorite thing to cook on a weeknight?
“This depends on the season. In the summer and fall, I like sauteed or grilled fresh vegetables, often with some chicken or fish. In the late spring, when asparagus is fresh and local, that’s the go-to vegetable: night after night, grilled, roasted or lightly sauteed, with some Parmesan cheese. Some version of butternut squash soup is a must during the colder seasons. I like to have seafood at least twice a week: cod, sauteed or baked; broiled scallops or broiled haddock, topped with panko, shallots and tarragon.”

What do you like to cook when family or friends come over?
“Probably my favorite is risotto (see recipe, below) along with grilled chicken on skewers, marinated in lemon and fresh tarragon. Add a green salad and maybe a seasonal soup. In the summer I like to grill pizza, with the guests helping with the toppings. I often bake bread: either a no-knead whole wheat yeast bread or an Irish brown bread. I save dessert-making for the times I have company.’’

What have you been cooking during the pandemic?
“Like many other folks, I did a lot with beans. Also, farro and vegetarian dishes. My sister-in-law steered me to a vegetarian chili from the website Cookie and Kate. It’s excellent.”

What’s your favorite recipe resource?
“My favorite resources include ‘Joy of Cooking,’ the website Cookie and Kate, cookbooks by Ina Garten and Tyler Florence and The New York Times food section — the comments are often just as interesting, educational and entertaining as the recipes themselves. And of course, some friends who are very good cooks are a source of inspiration and usually willing to share a recipe.’’

What’s your favorite place to shop?
“Here in Oswego, Price Chopper, especially for seafood; Ontario Orchards and our farmers market for produce; Garafolo’s, for meat, and Green Planet Grocery. For a splurge, I do a mail order from Organic Prairie.’’

Once the ingredients are organized and laid out, the actual cooking happens in about 25 minutes, at the stove. I like this recipe because you can add something like roasted cherry tomatoes or baked butternut squash, honey nut squash or pumpkin depending on what’s in season. Sautéed asparagus and sugar snap peas are also tasty additions. —Mark Cole

Melt butter (or use olive oil) in a large, heavy saucepan over medium heat. Add the onion and cook over low heat until soft and translucent but not browned. Add the garlic and keep stirring for another minute.

Add the rice, increase the heat to medium and keep stirring. The standard advice is to stir until the rice begins to look chalky and you can see a white dot in the center of each grain (three to four minutes).

Add the white wine. Keep stirring to prevent sticking as the wine is absorbed.

Begin to add the stock, about a half-cup at a time, and keep stirring. It’s important that each half-cup is absorbed before you add the next. Halfway through the process, toss in the fresh herbs. When about 3 cups of stock have been absorbed, begin to taste the rice (probably after about 20 minutes of stirring). The rice should be a little firm to the bite, tender but not mushy. Add more stock as needed to get the rice to the point where it is still firm, but close to the consistency that you want.

Remove rice from the heat. Fold in one tablespoon of butter. Gently fold in parmesan cheese. Add salt and pepper to taste. Allow the risotto to stand for a minute before serving. Garnish with basil. Makes 4 servings.

Featured image: Risotto with herbs is Mark Cole’s favorite dish to cook when he has family or friends over for dinner.

Nominate a 55+ home cook for this feature! Email details, including contact information, to Margaret McCormick at mmccormickcny@gmail.com