Many parents have put their children in the center of the universe. The result is that these kids are losing perspective on what’s important 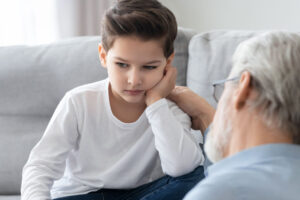 ‘Children are not born knowing how to behave. We parents must teach them right from wrong, and some are doing a poor job of it.’

The other day, I stopped at a diner near my home. At the table next to me was a mother with two children. The kids looked to be about maybe 10 and 13 years of age, and the older one was tapping away at his phone.

The mother apparently was looking for some quality time and interaction with her sons and nicely asked him to put away his phone. “Shut up!” he bellowed and continued tapping away.

I was so shocked that I dropped my fork. The mother looked embarrassed but said nothing.

I thought to myself what would have happened to me if I had ever told my mother to “shut up.” As we used to say during my youthful days growing up, “I’d be spitting teeth for a week.” Today, of course, Mom would be charged with child abuse.

Has it really come to this, I wondered, or was this just one out-of-control kid? When I got home, I started researching the question and came upon a recently published book which convinces me that what I had recently witnessed might be the new normal.

“The Collapse of Parenting” by Leonard Sax of Exton, Pennsylvania, a family physician and psychologist for 27 years, says that American families are facing a crisis of authority, because now kids are in charge.

Sax recounted an experience similar to mine, except it was in his office where a mother had taken her 10-year-old son because he had a stomachache. Sax said the boy was playing video games on his phone and ignoring him. The mother began describing the boy’s stomachache to Sax when the boy chimed in and said, “Shut up, Mom, you don’t know what you’re talking about.”

Sax said this kind of behavior is becoming common. “Children — both boys and girls — are disrespectful to their parents, to one another and to themselves,” Sax said. He said the culture has changed dramatically in a short period of time, causing significant harm to children.

His book is about the transfer of authority from parents to children. Sax said that he believes parents should treat older kids like grown-ups. “You should expect them to be mature and to behave,” he said.

He said you now find young children with cell phones in their bedrooms at 2 a.m. He advises taking the device at night and putting it into the charger, which stays in the parents’ bedroom. “No child should have a phone in their bedroom unsupervised,” Sax said.

He also laments the disappearing family dinner. “Research shows that having a family meal at home without distractions is important,” he said.

Sax said that by communicating that time at home as a family is the highest priority, parents send the message that family matters. “So many kids are in the race to nowhere, trying to add things on to their resume through extracurricular activities with no sense of why,” he complains. “They just burn out at 15.”

He believes parents should teach their children humility, which he claims is now the most un-American of virtues. “When I meet with kids, I ask them what they think humility is, and they have no idea,” he said. “In fact,” he added, “the high school kids are more clueless than younger ones.”

“They have been indoctrinated in their own awesomeness with no understanding of how this culture of bloated self-esteem leads to disillusionment,” Sax said.

“We keep telling these kids how amazing they are, then, when they are 25 and working in a cubicle in a low-wage job, we wonder why they are so resentful,” Sax observed.

In an article she wrote for Boston magazine, Julie Suratt said, “We’re lavishing our kids with unwarranted praise, trying to be their BFFs (best friends forever) instead of their parents, and giving them anything they ask for. Where have we gone wrong?”

Suratt asks another provocative question: Why is it so different now than when we were growing up? “We can point to peer pressure, rampant materialism, pop culture and the media, but the truth is: It’s our doing, and it’s high time we own up to it.”

Richard Weissbourd, a psychologist and senior lecturer at the Harvard Graduate School of Education and author of the book “The Parents We Mean to Be,” said we have become a generation of nurturers producing a generation of children ill-equipped to handle life’s “slings and arrows.”

Children are not born knowing how to behave. We parents must teach them right from wrong, and some are doing a poor job of it. Many parents have put their children in the center of the universe. The result is that these kids are losing perspective on what’s important. Instead of instilling concern in children about reaching out to others, it has become all about them, all the time.

We are growing a generation of self-absorbed narcissists which does not bode well for humanity.