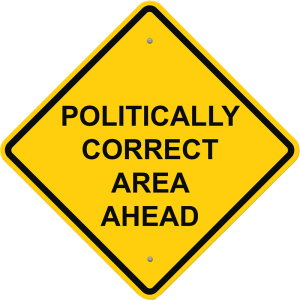 Some school districts have banned Halloween because of its being “overtly religious.” Others have banned this wildly popular fall observance as “the devil’s handiwork.”

In Seattle, “brownbag lunch” is no longer an expression used in government documents, so as not to appear racist. Some schools have changed “Easter eggs” to “spring spheres” and, in some places, movements exist to change the term “snowman” to “snowperson.”

Welcome to PC — the wacky world of political correctness.

According to Alex Francis, writing in The Pendulum, “At its worst, the overbearing political correctness is no different from the Orwellian idea of newsspeak — the effort to change the way people think by changing the way they speak. We are at a point in this country where people need to grow up and realize that there are a lot of real problems out there that are more important than whether the word `snowman’ is sexist.”

We are a contradiction of double standards. I remember in 1993 when Lorena Bobbitt cut off her husband’s penis with a knife while he was asleep, then drove off with it and threw it into a field. John’s penis was subsequently found and surgically reattached.

The late night talk shows went into overdrive yakking it up over this bizarre incident, which occurred in Manassas, Va. One can only imagine what type of late-night characterizations would have been made against John Bobbitt, a native of Buffalo, had he cut off his wife’s private parts. I guarantee that the laughing would have been nonexistent.

African-American comedians can disparage other ethnic groups and those with alternative sexual persuasions with impunity, yet white comedians who do the same are called racist. Comic Sam Kinison was nearly blackballed when he joked insensitively about actor Rock Hudson and other homosexuals.

Scores of phrases have subtlty infiltrated our language to help us be less offensive or to make reality less real, less harsh.

People are no longer “heavy,” “overweight” or “fat.” They are now “calorically challenged.” Comedian Arthur Godfrey had a No. 1 hit in 1947 with the “Too Fat Polka” — “I don’t want her, you can have her, she’s too fat for me…” The lyrics also included: “She’s a twosome, she’s a foursome; if she’d lose some, I would like her more some.” Can you imagine the firestorm that such a song would trigger today?

The garbage man of old is now a sanitation engineer.

If Elvis were alive today, he wouldn’t be allowed to sing “In the Ghetto;” rather, it would be “In the Disadvantaged Area.”

The next time you are stopped by a police officer who thinks you may have been drinking, you can assure him or her that you are just a bit chemically inconvenienced.

If you lose your job, you are not unemployed; you are “involuntarily leisured.”

The mindset today is to cushion and protect us from life’s harshness. To show you how weird this has become, all you need to do is to pick up a Styrofoam cup of McDonald’s coffee and read “contents are hot.” How’s that for a shocking revelation. Yes, it has come to this — warn us against the obvious.

The interior of our automobiles are billboards of warnings about airbags, seatbelts, safety devices, alarm systems and how to strap in our children.

The latest rush to judgment is occurring as the result of school shootings throughout the country. So as not to take any chances with a student harboring hostilities, we will pounce on any innocent 8- or 9-year-old who, in a moment of frustration, utters a throwaway threat.

I don’t know about you, but if I were locked up every time I made a disparaging remark about school, an administrator, teacher or fellow student, I would not be here to write about it.

As youngsters, we routinely bragged that “my father can kill your father.” Today, that remark might cost a kid several days in juvenile detention. (Oh, sorry, I meant to say “under-aged rehabilitation facility.)

Make no mistake about it: Even jokes or pranks will not be tolerated in this climate of hysteria. So watch what you say, do or even think, because the Politically Correct Police Corps may be on duty, and I assure you they are not laughing.