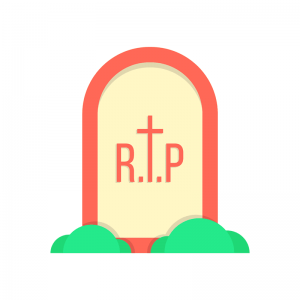 When it comes to my funeral, I am thinking outside of the box.

I am sure this will not make any of my funeral director friends very happy, especially since some consider me a near-term prospective customer. After all, I became an official octogenarian a few months ago, so the clock seems to be ticking a bit louder these days.

Naturally, we can’t avoid funeral directors completely, because their powerful lobbies have convinced state legislators that there must be regulations and uniformity; otherwise, we might wind up buried in the backyard at minimal cost to our heirs or discarded in the woods to provide dinner for wild animals.

As for me, well, I want to put the “fun” in “funeral.” I know, I know. Some of you reading this are retching at such a notion. You are convinced that I am talking heresy and sacrilege, that I am trivializing one of life’s most solemn occasions.

Understand that I am fully aware that this approach is not for everyone, but I assure you that I am not alone. I was pleasantly surprised to have read recently in The Washington Post about others who are memorializing loved ones in non-traditional ways.

One daughter threw a “Memorialpalooza” party for her father several months after his death. Three hundred family members and friends showed up to enjoy hot dogs, sodas and funky music and received baseball caps inscribed with one of his favorite sayings, “Life’s not fair; get over it.”

As Mark Twain cleverly observed: There are just two certainties in life — the other is taxes. But the time-honored ritual of shelling out more than $10,000 for a full-blown sendoff at a funeral home does not play well to a much more secular and casual America.

Instead, funerals are being personalized — golf course cocktails for the once avid duffer, a medley of Sinatra tunes in place of “Ave Maria” for the “ol’ blue eyes” aficionado; even suits and ties are coming off and being replaced by more casual wear.

If you think this trend is far-fetched, think of the major changes that have occurred during the last generation with weddings. Whoever heard of destination weddings in the ‘70s?

Many families have already replaced viewings with memorial services where the body is not present. This coincides with the fact that about a third of Americans say that they never attend religious services, and nearly a quarter say they consider themselves atheist or agnostic.

It’s been more than four years now that I gave explicit instructions to my middle son, Mike, on how to carry out my wishes once I pass to the Great Beyond or wherever I am heading. Among my three children, I chose Mike, because he is funny and can pull this off without appearing maudlin and gimmicky.

Of course, I discussed this with him in advance, and he seemed as fascinated with the prospects of roasting his father after his body had already been roasted. Come on, lighten up. I want to be cremated in the “most economical way possible” with no open-casket viewing.

I am requesting a memorial service that celebrates my life — one that will allow family, friends, colleagues and acquaintances to “share recollections and reminiscences.”

This is to be followed by a “let’s have a good time” celebration, which includes food and drink at a location that “befits the occasion.” I am asking that ‘50s and early-‘60s music be played to commemorate the wonderful memories the tunes of that era held for me. Featured prominently will be the Four Lads’ recording of “Moments to Remember.”

I will be asking anyone attending who would care to do so to “roast” me. My only hope is that I can be aware of what is being said and join in the laughter.

My other two children are on board with this, too, but I am sure there may be some relatives who will find my requests to be ghoulish, which is why I have added this to my instructions:

“While I understand that some of these requests are a bit unorthodox, I ask my family to acquiesce and to embrace my final wishes.”

I was happy to learn that more than half of all Americans are cremated today, compared to 28 percent in 2002. The reason is cost, plus there are many who feel that cremation is more environmentally friendly. By 2035, cremations are expected to top 80 percent.

The funeral home industry is adapting to these changes. Funeral directors are taking the cue and centering services around a person’s personality and likes and dislikes, providing for a unique experience that families will find meaningful.

Some funeral homes have hired event planners, remodeled their facilities to include dance floors and lounge areas and acquired liquor licenses. Others have organized memorial celebrations at all sorts of locations that tie in with the deceased’s life. Hmm, I wonder whether Publisher Jon Spaulding would allow the event at The Palladium-Times where I capped my professional career.

Of course, there are many opponents who say that this approach detracts from the grieving process for survivors. How do you carry out the deceased’s wishes without acknowledging sadness and loss?

The key, I believe, is to make sure that a person discusses these plans in advance with the immediate family and addresses any objections that arise. The worst possible approach would be for a son or daughter to find out the unconventionality of the parent’s plan after death and have just days to come to grips with it.