Retirement all planned out? Don’t forget the RMD 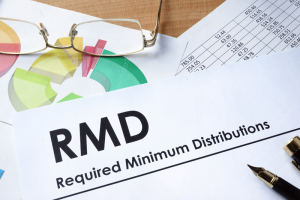 After many months of planning, I retired in 1998 as publisher of The Palladium-Times in Oswego at age 59 ½. I foresaw what was coming in the newspaper business and wanted to leave before the gathering storm clouds turned into a full-blown tsunami.

Obviously, I was too young to collect Social Security, but I did have money squirreled away in an Individual Retirement Account (IRA), 401 (k) and several other sources of income. I knew that I could withdraw funds from my IRA without penalty after I turned 59 ½, so this was a major factor in choosing this retirement date.

Despite all of the research and planning I did before I actually retired, not once had I run into what is called the Required Minimum Distribution (RMD). After I turned 70 in June of 2009, I started getting notices from my brokerage firm and banks that I needed to start taking the RMDs soon.

According to the law, I had to take my first RMD on April 1 after I turned 70 ½. This is in contrast to RMDs from employer-sponsored plans which in most cases can be postponed until after the employee retires or reaches age 70 ½, whichever comes later.

Since I had no idea what an RMD was, I quickly contacted representatives of these institutions to find out. These accounts are not tax-free forever as I had envisioned, I was told.

I figured if I did not need the money in these retirement accounts, I could leave it there indefinitely — tax-free to boot. What a sweet deal, but, hey, I am a senior citizen, so just another perk, right?

Wrong. Uncle Sam had other plans.

He wants his money sooner rather than later, which is why the government came up with the concept of the RMD. The purpose of the RMD rules is to make sure that you do not hold on to all retirement accounts indefinitely, defer taxation and leave all of these retirement funds as an inheritance. Instead, RMDs force the holder to withdraw at least some of the funds as taxable distributions while still alive.

Each year after turning 70 ½, a person must take a proportion of his or her retirement account and pay ordinary taxes on the amount withdrawn.

The amount varies from year to year, depending on how much remains in the account and how it is impacted by a life expectancy formula similar to what an insurance company uses.

I am not the only one who has been surprised by this requirement. It was especially shocking to several of my friends who were equally unaware of this provision in the tax code.

They, as I, would have preferred to keep the money in the account for a few more years so it could continue accruing tax-free interest and/or dividends.

Most of us used pretax dollars when we contributed to our retirement funds during our working years. This resulted in a deferment on income taxes on these contributions.

The government doesn’t fool around: If you don’t take these annual withdrawals, you will have to pay half of what you should have withdrawn as a penalty. This is, of course, on top of the actual required distribution itself. That can be a nasty punch in the gut that could wind up costing you substantially. In the example cited earlier, the penalty would amount to $3,650.

The IRS has a worksheet to help taxpayers figure out what they owe, and various financial institutions have online calculators. Brokerage firms, banks and other depositories which hold IRAs will alert you annually as to how much must be taken from the IRA to satisfy Internal Revenue Service rules.

In my case, for example, in early January of each year I get a notice from my brokerage account and any other accounts where I have these types of funds telling me to the penny how much I need to withdraw during the calendar year.

Some like to take a monthly sum. I take mine in a lump sum in early December so I have a pot of money around the holidays. It’s up to you to decide on the distribution, just so long as the total required amount is out of your account by the end of the calendar year.

Most banks and brokerage firms will allow you to withhold federal taxes on the amount you withdraw. For example, I have 20 percent of the amount taken out, so I am not hit with a big tax bill in April.

There are strategies that can be used to mitigate the impact of the RMD, provided that you do some heavy-duty planning with your financial adviser or a tax expert.

Roth IRAs and Roth 401(k) accounts do not require their holders to take RMDs because they paid the tax on these financial vehicles up front. When a person’s heirs cash in these accounts after the holder’s death, however, the proceeds are taxed as ordinary income.

There are many variables that come into play when debating the advisability of adding to an IRA or 401(k) as you approach retirement, especially since RMDs are taxed at usual rates — up to 37 percent — while capital gains or dividends from investment accounts can be taxed at a top rate of just 23.8 percent under the new tax law enacted by Congress last year and signed by President Donald Trump.

About the only reasonable way to eliminate the call of the taxman is to donate all or part of your RMD proceeds to charity, especially if you are a public-spirited type individual. There is a limit of $100,000 a year on this type of donation.