I have three daughters-in-law. Two of them call me “Bruce’’; the third does not call me anything.

She and my son have been married for more than 32 years, so this has become more than a curiosity to me, especially since she beckoned my wife into a hushed-tone conversation about 13 years ago asking her whether she thought it would be OK with me if she were to call me “Dad.” 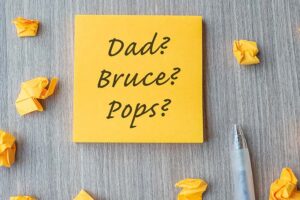 My wife came to me shortly afterwards and described the conversation with our daughter-in-law. I said “sure.” She can call me “Dad,” she can call me “Bruce.” It makes no difference to me.

(Remember that old TV commercial for Natural Light Beer that started airing in 1978: “You can call me Ray, or you can call me Jay…’’)?

Some in-laws are offended if their daughters-in-law do not call them “Mom” or “Dad,” but the way I see it is that they already have parents, so it’s up to them whether they want to cause possible confusion, especially when both sets of parents are in the same room. To which one does a “Mom” or “Dad” refer?

The natural parents also might be offended if their child calls someone else “Mom” or “Dad,” so why stir the pot of discontent. Many feel these designations are reserved for their natural parents only, as a matter of respect.

I had no problem calling my in-laws “Mom” and “Dad,” but, of course, that was my personal choice, but only up to a point. Prior to that, I referred to them as “Mr.” or “Mrs.” Even up until our wedding day. I never once called them by their first name or presumed to start the “Mom’’ or “Dad’’ early.

Before I began calling them “Mom” and “Dad,” I had two conversations, one with my wife and one with my parents. I asked both what they thought of the idea. My wife thought it was perfect. It was fine with my father, but my mother was a bit less enthusiastic, but she told me to “do as you see fit.”

Two of my daughters-in-law routinely call me “Bruce.” The one I am referencing in this column has never called me any name — not “Bruce,” not “Dad,” not “Mr. Frassinelli,” not “hey, you,” or anything else.

In written communication, when I get a thank you note, it starts off “Dear Nonno.” (“Nonno” is the affectionate Italian word for “grandfather.”) The note’s signature carries the names of my son, his wife and their now 26-year-old daughter.

Now, my son has never called me “Nonno” to my face, but the way he signs the note on behalf of him and his family members means that he is referring to me as “Nonno” on these occasions.

When I send a note to my sons and their wives, I sign it “Dad/Bruce.” In my oldest son’s case, the one who’s the subject of this column, I began signing it just “Dad,” based on the conversation my daughter-in-law had with my wife, because I expected at that point that she would be calling me “Dad.”

After about 10 years, when that didn’t happen, I reverted to the “Dad/Bruce” signature, which is what I continue to use today.

To be honest, I am conflicted. As you may have deduced from my writings, I am a direct person and don’t like to beat around the bush.

On one hand, I would just like to have a conversation with my daughter-in-law about this, reminding her that it was she who asked whether I would mind if she called me “Dad,” and I said I wouldn’t. Since she never did, what happened? Did she change her mind? Could she just not pull the trigger to say the word “Dad” when it came to me? By the way, she never referred to my wife as “Mom” or by her first name or anything else.

My daughter-in-law is a sensitive person, and I fear even addressing the subject might be taken the wrong way and touch off undue tensions in our relationship, possibly even with my son, so I have just stewed about it inwardly and said nothing.

I have found in my research on this subject that I am not alone in this quandary. What to call parents-in-law apparently is a major issue because it carries emotional overtones and has such long-range repercussions. Researchers have found that deciding what to call the parents-in-law can set the tone for the entire relationship that follows.

A friend calls her father-in-law “Pops,” which sends shivers down my back. And who can forget Archie Bunker’s reference to his son-in-law as “Meathead.” Names such as these should be avoided at all cost.

So what happens when the issue is not resolved? Well, you’re reading one example, where a father-in-law wonders what went wrong and why. When we deal with someone who doesn’t address us by our correct name or who calls us by a name we don’t like, we feel devalued and insulted.

Researchers who have looked into this issue give this advice: If you haven’t settled on names for your parents-in-law, you’ll notice the situation becoming increasingly tense. No one wants to be the one to say what everyone knows: If you never address your parents-in-law directly, most everyone else in the family will be aware of it and tiptoe around the issue.

Worst of all, if you don’t establish a name for your mother-in-law or father-in-law, you’re all too likely to end up talking to your in-laws only when you are face-to-face with them, which, to say the least, becomes very awkward and very noticeable.