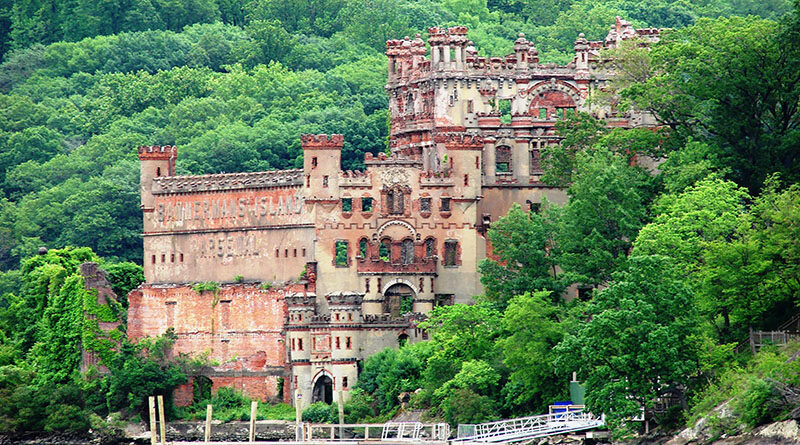 Did you ever dream of staying in a castle?

If so, there is no need to go to Europe to fulfill your dream. New York has several castles. Wealthy Americans, looking for status, built mansions many of which were inspired by castles in Europe. Today some offer accommodations, others operate as a restaurant, while others are open for visitors.

Here are 10 castles worth visiting: 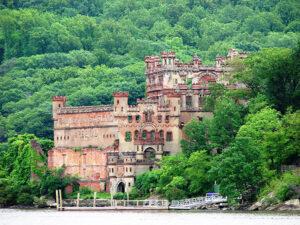 The crumbling castle is located on Pollepel Island in the Hudson River, near Beacon. The history of the island dates back to pre-Revolutionary times but gets its name from the family, the Bannermans, who purchased it n 1900 and constructed a Scottish-like castle. It was used as a summer residence. It was destroyed by fire followed by further destruction by vandals and the elements. In the late 1960s it was given to the Taconic Park Commission who is working to preserve it. 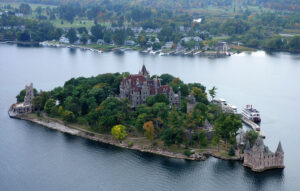 The most visited castle in NYS is Boldt Castle and Yacht House on Heart Island in the Thousand Islands a short boat ride from Alexandria Bay. Boldt Castle was built at the behest of millionaire George Boldt for his wife, who died before it was finished. Upon her death, Boldt ordered all work to cease and never returned to the island. For seven decades the buildings were at the mercy of the elements and vandals. In 1977 The Thousand Islands Bridge Authority acquired the property and has spent millions of dollars rehabilitating and restoring the buildings. The property is open to the public during the summer for daytime use only. It is a popular place for weddings. 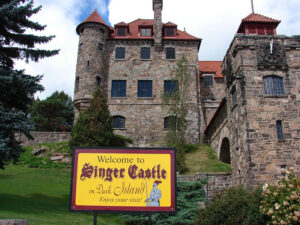 Also in the Thousand Islands on Dark Island, Singer Castle was lived in by members of the Frederick G. Bourne family from 1904 until the mid-1960s. Frederick Bourne was the CEO of the Singer Sewing Machine Co. There are many fascinating aspects to the castle including the servant tunnels and underground passageways. Much of the original furnishings are in the castle. It is a wedding destination that can include a stay in the royal suite. Tours are available. 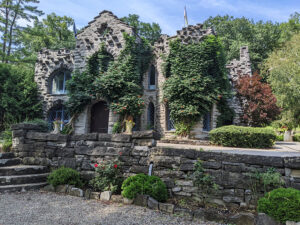 Located near Little Falls, Augustus Beardslee used craftsmen from Ireland and Switzerland to design and construct the limestone building in the style of an Irish castle. The interior suffered from two fires, one in 1919 and another in 1989. After a two-year restoration, the new owners opened Beardslee Castle as a restaurant. It is a popular venue for weddings and popular with ghost hunters who claim the building is haunted. 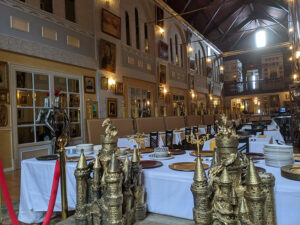 Located high on a hill overlooking the city of Amsterdam, the castle was built by Isaac Perry in 1827. Perry is best known as the designer of the Capitol Building in Albany. It originally served as the National Guard armory for Montgomery County, then as a B&B, before being purchased in 2015. The new owners spent four million dollars in renovations. Great Hall with a medieval flair with armament and heraldry is spectacular. The walls are covered with artwork reminiscent of art museums. The accommodations are large and modern, with walls of artwork. The castle host functions including weddings. There is no restaurant, but the accommodations come with light snacks.

Belhurst Castle in Geneva has a complicated and convoluted history dating back to when the site was a Seneca Indian village. In 1852 the land was purchased by Harrison G. Otis and dubbed the property “Bellehurst” meaning beautiful forest. The property changed ownership within the Otis family until it was purchased, in 1885, by Mrs. Carrie Harron who was responsible for the construction of the castle. Fifty men worked for four years using some materials imported from Europe. The colorful history continued when it was purchased by Cornelius J. Dwyer who opened a restaurant and a gambling establishment that operated as a speakeasy during probation. In 1992 the property was purchased by Duane Reeder and has become a popular restaurant and wedding venue.

The castle, near the city of Hudson, was once the home and studio of painter Frederic Edwin Church. Church was a member of the Hudson River School of landscape painting. It is now a NYS historic and a National Historic Landmark popular with tourists. Church and his wife raised their four children there. The name comes from the old Latin name for Persia. The Persian-inspired castle has a panoramic view of the area. There are no accommodations but there are tours including one along five miles of Church designed roads.

Most of the castles of NYS are more than 100 years old, but dreams of castles never die. In Bolton Landing on Lake George, the Highland Castle is the result of a dream and promise. In 1978 John A. Lavender said to his 3-year-old son, “Someday, Jason, I will build you a castle.” And he did, with the help of his son. On the property there are three castle buildings and a restaurant. “Build it and they will come.”

The castle is one of the highlights when visiting Central Park in New York City. The Italian name translates to “beautiful view.” The building was completed on a high rock mound in 1872 and as the name suggest it offers one of the best views in the park. Originally it was designed as an open-air lookout tower so there were no doors or windows. In 1919 the U. S. Weather Bureau added windows and door when it converted the building into a weather station. Today it houses one of the park’s visitor’s centers and a gift shop. Guided and audio tours are available. 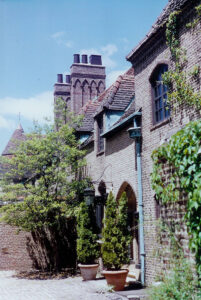 There are several castles on Long Island’s Gold Coast. Falaise is one of few intact historic homes. It was built in the 1920s in the style of a 13th-century Norman manor house for Harry F. Guggenheim and his wife, Caroline Morton. The medieval theme includes archways and thick wooden beams. The Guggenhiems furnished Falaise (French for cliff) with 16th and 17th century antiques gathered from their European travels. Docent-guided tours are available.