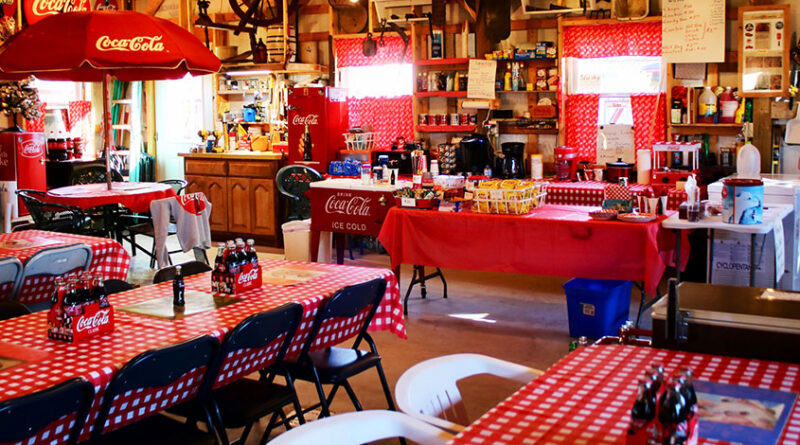 Dave Phillips, 72, was sitting in his garage on a beautiful and unusually warm autumn afternoon.

Well, it was his garage. Now, it’s a Coca-Cola Museum, in Silver Springs, nine miles from Letchworth State Park.

Here you can join Phillips for a hot dog or snack and. of course, a coke.

You can spend hours looking through all his Coca-Cola treasures — bottles from different cities all over the world, historic bottles, trays, pins, clothing, cookie jars, car models, throws, signs, a lot of signs, train sets, Christmas decorations and a lot more.

For most folks, the museum smothers you lovingly with all the red color and the warmth it provides. The Coke advertising signs and trays and mugs and glasses are instant memory-igniters.

Having Phillips around as the docent and guide and barbecue chef means you can ask a question and get a story with your hot dog. Had this little museum existed 40 years ago, you could have imagined Phillips lighting a pipe like Santa Claus to spin a tale about an artifact while the smoke hazed around you.

The museum became a labor of love and product of determination and has melded into an homage to a very special relationship.

For 10 years, Phillips and his wife, Janet, were partners in the quest for the next interesting Coke thing they could find, and they looked in a lot of places.

She died in November of 2021. For a long while, she was unable to come out and help him in the museum, which he finished in 2019. But she’d often try to accompany him when he was going to look for new pieces at antique shops or flea markets somewhere, even though she was sometimes unable to get out of the car. He’d bring the item to her or send a photo on her phone and ask for her blessing to buy it.

The path to the museum took a long time to start.

Phillips served as a sergeant in the Marine Corps and left to start his own construction company, which he ran for almost 15 years.

“I fell off a roof and messed up my back,” he said. “The doctor recommended I get into something new. The only other thing I knew was farming. I grew up on this farm. I knew that wasn’t going to work. Janet and I were involved in our church. I taught Sunday School and she said, ‘Why don’t you think about teaching?’”

He gave it a go. “I went back to school, to college, at age 36,” he said, “to Roberts Wesleyan. I graduated in 1990 and got a job at Letchworth Elementary School immediately. At that time they were looking for males. The superintendent at that time wanted to get a male at every grade level.”

He taught third grade for the better part of 25 years.

“I retired and got back into construction again until last year, when I retired from that because it was starting to take a toll on me. Now, I’m into this museum and trying to keep all the farming area up to snuff — 90 acres here, another parcel down the road of 40 acres. I rent the land out to local farmers.”

The museum started with a Coke pitcher.

Phillips pushes the Coke hat he’s wearing off his forehead and the story unwinds.

“I had retired in 2012 and Janet and I started doing some traveling. We went to Florida to visit my son. We stopped for gas in Fancy Gap, West Virginia,” he said. “On the way to the gas station, we passed this old rickety shack that had a sign outside, ‘Antiques.’ I said we ought to stop and take a look in there.

“We were not antiquers. I’d never been in an antique shop in my life. We went in, it was a cold day and an elderly woman was huddled around a propane stove because it was even colder in there. The pitcher was on a round table. I simply said to my wife, ‘Wouldn’t that be neat to get for the grandkids? To fill it up with Coke when they come to visit?’

The pitcher was happy by itself for a while.

“I filled it up with coke the first time and my wife said, ‘We need to get some Coke glasses.’ So then we went looking for Coke glasses and boom! The next thing I know we’re looking for anything Coke-related,” he said. “That was 10 years ago, in the spring. All of a sudden, all this other stuff started to happen and we were looking everywhere for things that were interesting.”

The interesting stuff began to take on a life of its own.

In 2020, Phillips moved his mom and dad up from Florida to take care of them.

“The Coke stuff had to go. My sons put it all in totes and my wife wasn’t too happy about it. We moved it all to the garage I built in 2019. She said, ‘You’ll never get that stuff out again after you put it in the totes.’ ’Yes I will,’ I told her. ‘It just takes time.’ I had the second floor of the garage painted; the ceiling and sidewalls were in.”

Phillips saw a near future for him and Janet to enjoy the museum together. It wasn’t to be.

“I didn’t know she was going to pass,” he said.

A minute passed. “All of a sudden, I had the time,” he said, looking around at all the items in the museum.

When he and Janet started collecting, they would make their yearly visits to Florida Coke-hunting trips, too. They’d return to Silver Springs with boxes full of Coke stuff.

“When I took things into the house, I’d put it all in a log book. I still do — the day I get something, where I got it, how much I paid for it, and if I can find the value, I put that in there, too,” he said.

He bought a book, “Petretti’s Coca-Cola Collectibles” and later added the app for his phone. 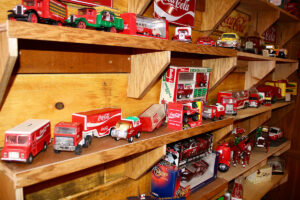 “I can pull up something on my phone when I’m in a store and tell if they’re undercharging or overcharging and if I’m going to make a good deal on it,” he said.

They got to be regulars at antique dealers in a wide area, many who would call him if they took something in stock they knew he’d be interested in.

“As time passed, I don’t want to say it became an obsession, but it kinda did,” he said.

“It got to the point where we couldn’t wait to get out for the next trip. Janet was at the point where she was housebound, but if I could get her in the car, she’d go,” he said. “Sometimes she would go with her pushcart. Sometimes she’d stay in the car. I’d send her pictures if she was in the car and she’d say, ‘Yeah, I think so. It’s a good buy.’ Or we’d bandy back and forth determining whether it was a good buy. Yes, it definitely became an obsession”

The range the couple would shop for Coke items: Ohio to the west, Florida to the south, Maine and New Hampshire to the north and on a weekend — the back roads of Pennsylvania.

“During the winter I go out a lot because nobody’s going to come here in the dead of winter,” he said, quickly noting that he will open the museum by appointment during the winter months if someone asks.

What’s the allure of acquiring all this Coke stuff?

“A lot, of course, is the value, but the color, the uniqueness of some of the items, the signs especially — the colors are so vibrant. I like to find the history behind the item if I can, where they came from. People keep asking me, ‘Are you selling any of this?’ I say, ‘No. It’s a collection. At some point someone might sell it, but it won’t be me.’”

His son told him, “Dad, you’ve gone over the edge.”

“But now that I have the museum up and running, my kids are looking at it differently. I think they’re worried about what to do with it all when I’m gone,” he said. “I told them, ‘Get somebody in here to take the whole shootin’ match; don’t piecemeal it.’”

The dominant color of the museum is, of course, that Coca-Cola vibrant red.

Phillips gets a little smile on his face when he thinks about it.

“My grandkids have a little trick they like to play on my periodically. They’ll slip a Pepsi can in here to see how long it takes me to find it. It doesn’t take me too long. There’s a sea of red in here and a blue can just doesn’t belong.”

Not having Janet around will take a toll on him this winter. 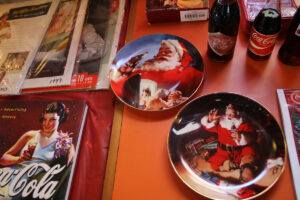 “The hard part is the loneliness,” he said. “There are days when it doesn’t bother me when I’m really, really busy. But when I sit down in the house at night the house is just plain quiet. Yes, my dad is there with me, but he goes to bed at 7:30. A lot of times I’ll come back out here to the museum and organize, remember stuff, look at something and know exactly where we got it, and when, and what the situation was.”

The museum had an open house on May 14, 2022 and drew 150 people. He cooked a lot of hot dogs that day. And he found out something about himself and the museum and Janet.

“It’s the sharing,” he explained. “When I got it all set up and had my open house, I really hadn’t thought about it. Then all these people came. My oldest son asked, after everybody left, ‘Now what are you going to do?’ I’m going to share, I told him. ‘This is something your mom and I spent 10 years doing and I’m going to share it. This is a dedication to her, like a memorial. There’s a lot of her in here, things that she bought that I may not have bought. Things she encouraged me to buy.’”

He talked about a fine summer’s day when he put a table outside and people stopped by the museum and sat at that table, enjoying one of Dave’s hot dogs and the museum sharing the afternoon with him.

“That was pretty neat,” he said.