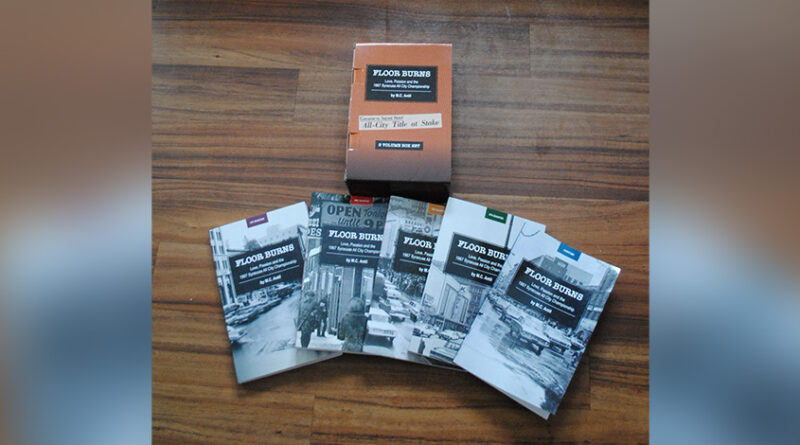 ‘Floor Burns’ is a story about a city and its times as told through the filter of a single basketball game between Corcoran High School, a predominately African-American team, against Sacred Heart, an all-white team

It started out as a book about the Parochial League, that uniquely Syracuse institution of local legend and lore.

But over the years author M.C. Antil said that “Floor Burns — Love, Passion and the 1967 Syracuse All City Championship” morphed into the story of that contest between the Parochial League’s Sacred Heart and the larger Corcoran High School at a time when the city was confronting the same issues that were rocking the country.

Corcoran’s was a predominately African-American team and Sacred Heart’s was an all-white team from a largely Polish neighborhood on Syracuse’s west side.

“It’s a story about a city and its times as told through the filter of a single basketball game,” Antil said in a recent interview.

Syracusans of a certain age will remember the Parochial League as a group of neighborhood Catholic High Schools in the city. Their basketball teams, especially, were involved in fierce competitions each season, and many still recall the games, the players, the plays, and the scores long after the schools have closed their doors permanently.

The original book, he explained, was to be 10 chapters, one chapter on each of the schools.

“But it became somewhat repetitive,” Antil said. “The Parochial League was more than that. I knew there was something better than that. It wasn’t until that meeting with the Nelson brothers that it started to click, that there’s a story here about the city as opposed to about the League,” he said.

Al and Marshall Nelson helped to break the color line in the Parochial League when the two African-American brothers played for St. John the Evangelist in the 1940s and ‘50s, and it was during these conversations, the author explained, that they started talking about the old 15th Ward, an old neighborhood in Syracuse near downtown and Syracuse University, where many of the city’s African-American community lived. It was razed in the 1960s to make way for what was termed progress, urban renewal and Interstate 81.

“The more African-American people I talked to, the more it became evident that this is a really special place for them. It was their homeland, their neighborhood and it was gone. This game, these all-city games, the last of which was 1967, suddenly became a symbol for them, and it mattered to them deeply,” Antil pointed out.

Families were displaced, and many found it difficult to find another apartment or a house.

“They were set adrift. They grew very resentful,” Antil explained.

That basketball game which pitted Corcoran, a predominately African-American team, against Sacred Heart, an all-white team from a Polish neighborhood, became a metaphor, in a way.

“It was these parallel worlds that were no longer parallel, but they were on a collision course, and they were crashing headlong into each other, one white and one Black. And so I told the story of the basketball game,” Antil said.

Of the book, he said, “I’m going to take you inside these two worlds,” he added, “and I’m going to show you the exact same basketball game through two different sets of eyes, two different experiences. If you have humanity, any human pathos, whatsoever, you will be changed by reading the story.”

The book is actually a five-volume set, broken up into what Antil has called First Quarter, Second Quarter, Third Quarter, Fourth Quarter and Overtime.

The Overtime volume tells the story of Bob Bregard, who Antil calls one of the most “tragic figures in Syracuse basketball history.”

Antil said he had done thousands of interviews and spent hours poring over newspaper accounts, and it’s evident. “Floor Burns” is full of local history and detail — names, places, and photos — and readers, invariably, will learn a lot more about their city or hometown.

“It’s been an amazing journey for me to learn about my hometown,” he said.

The 67-year-old currently makes his home in Chicago, but he grew up in Westvale, a western suburb of Syracuse, and attended Christian Brothers Academy. So how did a CBA alum come to write about the Parochial League?

“You don’t have to be a part of something to recognize that something’s special. Just the way people spoke about the Parochial League,” he said.

Not only is the book a metaphor, but so is the title, “Floor Burns.”

As Antil explained, when players dive on loose balls, their skin rubs against the floor and they get floor burns.

Several chapters of the book can be read online at www.floorburnsbook.com, and the boxed set can be ordered from that same website.