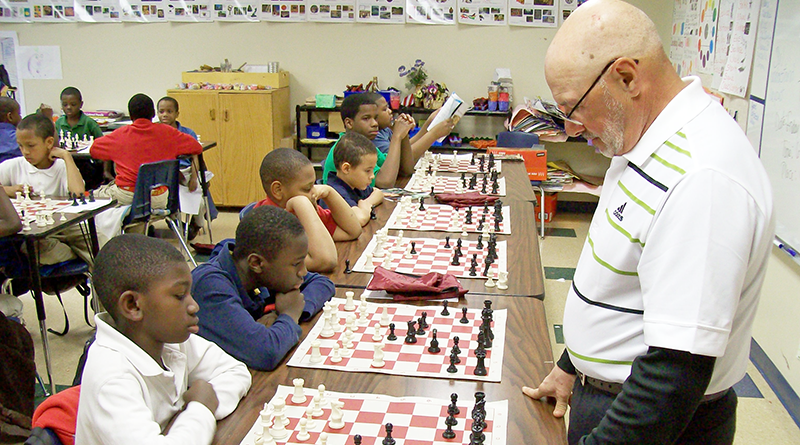 Although it may not be at the same level as the Bobby Fischer era, a chess resurgence is taking place in Central New York, thanks to a group of Syracuse men who are old enough to remember the times before the game was played online.

The nonprofit organization Syracuse Chess has solidified chess clubs in local schools, organized scholastic chess tournaments and has its sights set on teaching or re-teaching the game to older adults.

“Everyone knows it improves memory and thinking skills and can stave off dementia or Alzheimer’s,” said Anton Ninno, the group’s president. “And with the kids, they learn about the immediate consequences of their choices.”

“At some point, you get enough of the screens,” Ninno continued, referring to television, computers and video games. “It’s more fun to gather with real human beings. It’s just different.”

Ninno, 64, learned the game at the age of 8. At first, he didn’t like chess because it seemed too difficult. But Ninno experienced a renewed interest in the game when he taught his son Andy and daughter Kate how to play, though the family also enjoyed a variety of board games, including Monopoly. Andy later joined his high school chess club.

Ninno actually preferred “Go,” a two-player game in which the goal is to secure the majority of territory on a game board by strategically maneuvering player pieces. Its origins are traced back to ancient China. He established a Syracuse Go club 14 years ago. Enthusiasts of the game held gathering at local Wegmans cafes.

Ninno, a teacher at Southside Academy in Syracuse, used a chess set to teach sixth graders about medieval times. Many students took a serious interest in learning more about the game, so Ninno started a chess club. A decade later, the club is going stronger than ever.

“I taught a few how to play, and we were playing at lunch,” he said. “Then I volunteered to stay after school so more could play. It went from six kids to 16, and a week after that I had to lock the doors because we didn’t have enough seats.”

Parents and grandparents came to watch the afterschool matches. With so much enthusiasm surrounding the club, Ninno decided to show the young players and their fans something truly remarkable. He invited friend and fellow chess enthusiast Bob Nasiff to play all 24 students in the club simultaneously.

“The kids figured, he couldn’t beat all of them at once,” Ninno recalled with a laugh. “They figured they’d get at least one. But it could have been 100 of them against Bob. It wouldn’t have mattered.”

Nasiff, 73, a certified chess master with the U.S. Chess Federation and a former assistant director with the federation, beat all 24 opponents with ease. The kids left school that day with a new appreciation and level of commitment for the game.

“The kids like competition, and it’s fun,” Nasiff said. “It’s easier to learn the rules of chess than you think. The more difficult part is learning to pay more attention to what your opponent is doing. Chess takes a huge amount of patience. I probably spend 75 percent of my time thinking about what my opponents are doing.”

Nasiff, a retired special education teacher, didn’t start playing chess regularly until he joined his high school chess club at the age of 15. “I remember seeing the old men playing in the park and wondering, what is the fascination with that game? So, since the club was open to all, I figured I’d try to understand it more.”

Nasiff got a cheap chess set and played his brother every day. A few weeks later, he beat the best player in the high school chess club. Nasiff said he was told he had strong spatial skills for his age, was strong in math and had a knack for solving problems in his head — abilities that translated well onto the chessboard. After graduation he enlisted in the U.S. Army, where he spent much of his down time playing chess and reading books about the game. While stationed in Hawaii, he entered high-level competitions and won a state championship.

While working as a teacher, Nasiff earned extra money on the side giving private chess lessons. He also established chess clubs in local school and organized scholastic tournaments. He continues to play competitively as his schedule allows and admits that while he’s still a master-level player, his speed game is gradually slowing down with age.

“In the five-minute games, I’m not as strong as I used to be,” he said. “On the Internet, I find myself getting into time trouble faster. I think your thinking slows down a little bit.”

But Nasiff stresses that older adults should not be deterred from learning or relearning chess if they are worried about not being as competitive at a game as they once were. It’s a great workout for the brain regardless of skill level.

“It’s like anything else,” he explained. “You have to exercise physically, and you have to do the same with your brain. It goes a long way in your health. Chess is a sport of the mind.”

He also thinks chess is an attractive activity for retirees because it’s an inexpensive way to socialize, whether you choose to gather for competitions in a city park or a mall food court. It’s also a nice activity for those who are shy, because you don’t have to talk when you play chess.

“There’s a ton of potential to do more outreach to seniors,” Nasiff said.

Jim Gonnella, 65, a Syracuse Chess board member who volunteers with chess clubs in Syracuse city schools, has a similar chess background with the students in that he worked his way up to chess from checkers. He first played as a teen-ager but didn’t start taking the game seriously until college. The retired radar engineer still competes in adult tournaments, where he has noticed many players 20, 30 and even 40 years his junior.

“I do think there’s a renewed interest in chess, but definitely not like what we saw in the 1970s,” Gonnella said. “The best players in the world are pretty young now, so that may be part of it.”

Gonnella has provided chess lessons to entire families. He’s learned there are many adults in the area that might enjoy playing chess again or even teaching others how to play, but they are unsure of their knowledge and skills because they haven’t played in so long.

“They are unsure of their own abilities even though they know they really like the game,” he said. “We really need an initiative to teach the teachers.”

Syracuse Chess is still a new organization. While members have enjoyed success in their scholastic endeavors, they have only just begun to brainstorm ideas for bringing the game to older adults. Ninno has already held family chess nights at a local YMCA and the Westcott Community Center, which included a presentation on the history of the game and a thorough explanation of the rules and how the pieces can be moved. Then the participants were invited to play as Ninno introduced himself to each participant, answered questions and offered tips.

“We would like to do the same thing at senior centers,” he said. “This could complement existing bridge clubs or bingo nights.”

Ninno expects to retire from his full-time teaching job within a year. He hopes to spend much of his free time expanding Syracuse Chess programs to more communities. Chess will be an easy sell, he says, to young and old.

“I think many people will like it for the same reason that I like it — chess is like a puzzle. It’s not as much about winning or losing as it is working on something and always learning from it,” Ninno said.