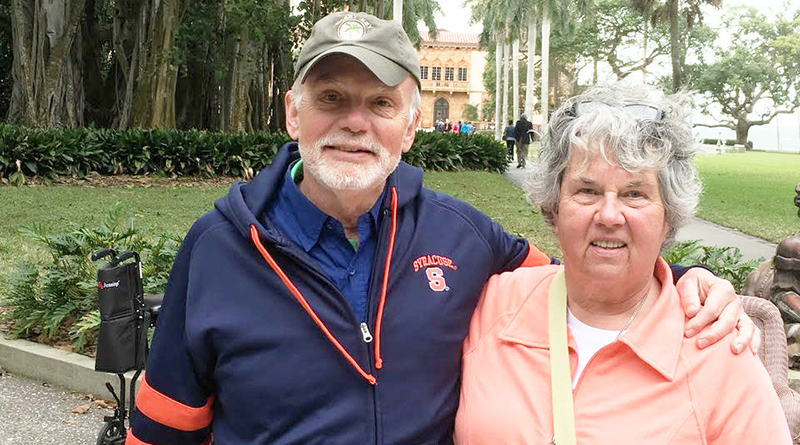 Couple loves Central New York, but spending a month or two in Florida has become a tradition in the winter

When Donna Stoner, now 73, worked as a director of volunteers at Upstate University Hospital, she had to fit volunteer schedules around the winter snowbirds’ travel plans.

Donna Stoner, 73, and her husband, George Cady 68, like to take a break from the cold in the midst of winter, but as Stoner admits, they love Central New York so much that they don’t give up their home in Syracuse or their camp in the Adirondacks to move South. Rather, they rent a place in Venice, Fla., from late January to mid-March from a family that lives in Germany.

Since she retired in 2009, the couple has taken meandering road trips to their place in Florida so they can see different sites along the East Coast along the way.

“I like being able to be outside every day,” Stoner said. “My husband especially likes the bike trails, and I do, too. They have a good arts community, as we do in Syracuse. We picked that community because of the arts available.”

Stoner paints in watercolors and enjoys doing so outdoors.

Cady retired in 2008 from working as a library media specialist at Baker High School in Baldwinsville.

The couple hadn’t envisioned snow birding as a retirement goal. Stoner said they stumbled upon the idea.

It took root as she interviewed prospective volunteers for the hospital. She asked about their motives and expectations to help make a lasting match between volunteer and assignment. Many spoke about their own travel desires. By the time Stoner retired, she and Cady decided that they should travel to celebrate and visit family.

While on their trip, they made friends in the South and the sojourn became an annual tradition. They visit parks, historical sites — a favorite pastime of Cady’s — and hike.

“We have friends who stay six months even, but they’re conflicted because they have family up here and things they’re vested in that they have to take themselves away from,” Stoner said. “I get the sense they don’t have a sense of home. It’s six months here or there for the tax advantage. We didn’t want to do that.”

For Stoner and Cady, a month or so is enough.

“Florida is just so different,” Stoner said. “We’re not that crazy about Florida. I am a four-seasons person, drawn to water. You have all these lakes and canals in Florida and you can’t go in them because of alligators. It’s also flat. That’s why a month is perfect for us.”

They’ve contemplated staying elsewhere for their annual respite from the cold, but they always come back to the same conclusion: Venice, Fla., meets their objectives. They drive their car down so they can explore the state’s natural parks and historic sites. Stoner takes her paints along on the trip and her sketch pad to interesting venues.

The couple plans to go on a river cruise in Portugal soon.

“We like river cruising because you see things so differently moving along in a river,” Stoner said.

They’ve also traveled to Alaska, New Mexico, and a few other Western states.

Stoner’s dream trip is to go to Italy to stay for a few weeks in a town where she could go on day trips to paint.

She encourages anyone to travel if they’re able.

“You learn so much about yourself,” she said. “Especially now in our country, it’s important to get to know each other and hear each other out.

“I think it’s good for your perspective to travel and see different parts of the country, or travel even if it’s New York state. There’s wonderful places to explore everywhere.”