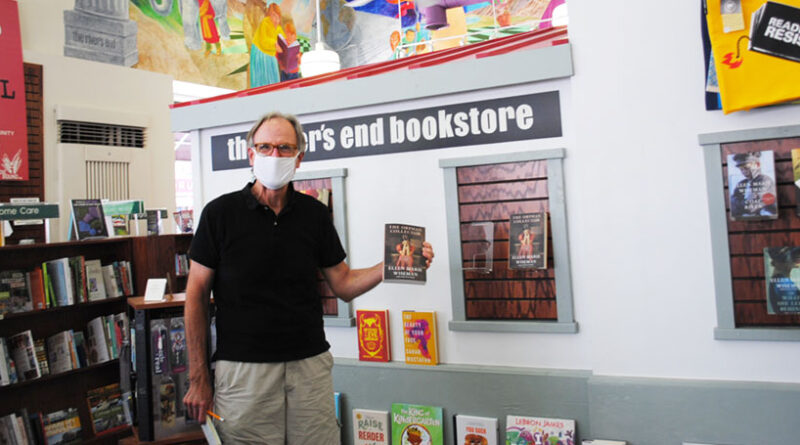 Reilly had been in advertising sales for Newsweek magazine in Manhattan, but in the 1990s, he retired, moved to Oswego, married and opened the river’s end bookstore in downtown Oswego.

Few job prospects in her field and an affinity for used books led Engelke to open her Time and Again Books and Tea in Oswego 20 years ago.

When Roberts’ wife, Ann Marie, was offered a new job in the 1980s in Syracuse, it would also create a new business opportunity for him.

Life changes for Larson brought her back to the Ithaca area from Seattle, where she has recently been able to realize a lifelong dream. 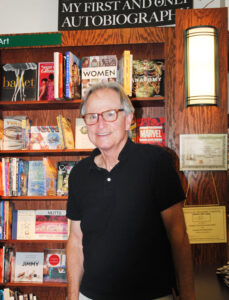 Bill Reilly bucked the national trend and refused to be deterred by naysayers when he, with his wife, Mindy Ostrow, opened their store in 1998 at 19 W. Bridge St., at the corner of West First Street.

Many told him a bookstore wouldn’t work in Oswego, and he was trying to start his business at a time when independent booksellers were shutting down.

“I was fearless and determined,” he said of himself then.

Today, at the age of 70, Reilly, admitted that he might not be as fearless, but he is no less excited about the store. And 22 years after opening the doors, any naysayers have long since fallen by the wayside.

The feedback from his customers, he said, keeps him energized, whether it’s an email complimenting a bookseller or the father that tells him that every time he drives by the shop with his children, they want to come in.

It’s important to communicate with the customers, he said, and he and his staff do that, not only with the face-to-face (or perhaps more accurately, facemask-to-facemask) interactions, but also through their newsletters and their website, www.riversendbookstore.com.  The staff includes four employees and four staff members, he said.

Reilly decided to retire from his career in NYC at the age of 46. He had achieved all he had set out to do in that job and was ready for a change.  He had been traveling to Oswego to visit a longtime friend for many years, and during one of those trips, he met Ostrow.  The couple continued a long-distance courtship for a time, but Reilly eventually relocated to Oswego, and they were married within a few days after his move.

Although Reilly and Ostrow have lived in the Port City for decades, they are from downstate, and they both wanted to open a business that would give back to their new hometown. They wanted to provide a business that didn’t already exist in town, such as a bar or a nail salon, he said.  There was no store in Oswego that was selling new books.

But by the mid-to late 1990s, independent booksellers were closing, with megastore, like Amazon and Barnes & Noble, looming large.

The couple realized they were “against the tide,” he said, but they “had their eyes open.”

The New York Times last summer noted that The American Booksellers Association membership has grown to 1,887 members with 2,524 locations as of spring in 2019. That marks the highest participation since at least 2009, when there were about 1,650 indie bookstores.

And when the growing digital age challenged booksellers with ebooks and audiobooks, for example, Reilly said they decided to embrace technology. Their website continues to handle a great deal of sales during the global pandemic, and it partners with libro.fm for audiobooks.

Reilly riversendbookstore has a prime location at 19 W. Bridge St., at the corner of West First Street, and the large windows along both streets provide plenty of natural light. In addition to the store’s 10,000 titles, there is a section dedicated to local and regional authors; “The Hideout,” where young children can go to read; colorful murals; and near the ceiling, in the center of the store, there’s a lighting creation replicating Oswego’s iconic lighthouse.

Reilly and Ostrow want their store to be a hub for the community, he said, where a cross-section of the population can meet, and during a recent visit there one morning, the store had customers of all ages browsing throughout. 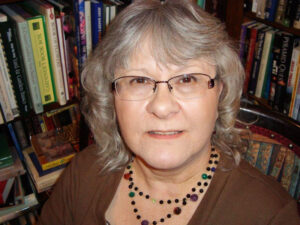 Debbie Engelke considers her books her employees, since they’re the ones who help to pay the bills, and those books offered through the store at 18 E. Utica St., Oswego number about 40,000.

It takes a lot of inventory to run this kind of business, she noted. The store includes a variety of used books, DVDs, books and music on CDs, specialty magazines, a selection of other collectibles, and aromatic teas from around the world.

The store came about after Engelke had troubles locating a job in her field. She had earned a master’s degree from SUNY Oswego in English and writing arts, but there were few job possibilities in the area, and commuting to a larger city or relocating were not options.

After several years, she recalled her husband, Ray, suggesting she start the bookstore she had always wanted to run. So the couple began the work to make that happen.

In talking with other used bookstore owners, she decided that buying instead of renting a site made more sense. So eventually, they purchased the house on East Utica Street and created the shop.

She decided to make it a used bookstore, as opposed to one that carried newer titles, because of her love of older books. Because she is an avid reader who enjoys 10 to 12 books a month, the cost of new books can be cost prohibitive, she said, so she has been a longtime fan of used books.

“I’ve been buying used books for myself my whole life. I like nothing better to see what I can find that I didn’t know existed,” she quipped. 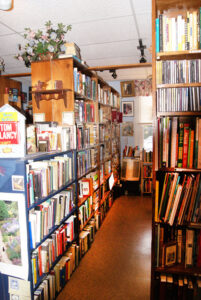 To keep enhancing their inventory, the Engelkes travel far and wide, and their journeys have taken them to such places as Virginia, Pennsylvania, Maine and Toronto.

But one of her most surprising finds was something that she had in her own attic. Many years prior, she had purchased a book for $4 for an Irish friend that featured hand-painted renderings of old buildings in Dublin that had been demolished. Before presenting him the gift, she learned that he was growing weary of gifts of Ireland that people were constantly giving him.  So, she kept the book, putting it in a big box in her attic.

When she and Ray were preparing to open the shop, they came across the book. Debbie looked it up on the Internet and found that it was worth $1,200. She put it online for sale, and although it took about three years later, it sold for a little over $800.

As like so many others, the COVID-19 pandemic has impacted the business as well. She lost the summer tourism business, which is a substantial revenue source for her. However, she has been taking calls from customers. doing curbside sales, and she is continuing to sell through Amazon. She pays a monthly fee to be post items on that mega-seller’s site.

During the pandemic, some of her customers, she said, have been staying home and reading a great deal. She explained that they may have gone through all the current books of their favorite authors and call her, asking her to locate earlier books by these authors that are out  of print. And she enjoys making recommendations of books from similar genres.

“Even if you don’t know what you want, we might be able to help you,” she said. 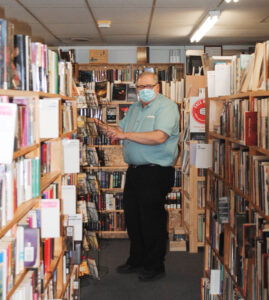 Jim Roberts is the owner of The Books Ends Bookshop, which specializes in used and out-of-print books.

A career change for his wife, Ann Marie, brought the couple to Syracuse in the mid-1980s, and while walking in their Eastwood neighborhood one evening, they came upon the shop at 2443 James St. A few days later, Roberts applied for and got a clerk’s job.

He had been working there for about two weeks when he knew he had found his calling. As he recalled, “I went home to Ann Marie and I said, ‘I found what I’m going to do for the rest of my life.  I don’t know how I’m going to do it yet, but this is what I want to do.’”

Fate would end up showing him how he would do it. Due to some life changes for then-owner Lois Favier, she sold Roberts the store, and he’s been the owner since 1987.

Currently, in addition to himself, he has one other full-time employee and four part-time staff.

The shop, which specializes in rare, used and out-of-print books, boasts between 45,000 to 50,000 titles, Roberts estimated. He has a few, which he keeps in the back of the store, that date from the 1600s and are priced in the thousands of dollars, and more current books that sell for $2 to $4.

Thirty-three years after taking over as owner of the shop, the 62-year-old still admits that he loves his job.

He finds great satisfaction in helping customers locate hard-to-find items, and he finds himself learning from them.

He does some online sales, especially during the COVID-19 pandemic shutdown, but he said his customers enjoy the experience of browsing through the brick-and-mortar store and finding those books they didn’t know they even wanted.

“That kind of serendipity happens all the time,” he said. 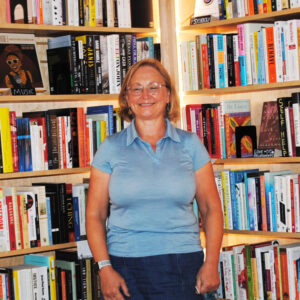 Laura Larson, 57, is realizing a long-time dream in opening her bookshop, Odyssey Bookstore, near the Ithaca Commons area, earlier this year.

She divorced about three years ago, and her youngest child had graduated from high school so she had to decide what to do next.

“I truly wanted to have a bookstore. My happy place as a child was ‘The Corner Bookstore’ in Ithaca,” she said. She moved with her family to Ithaca when she was 9, went to Cornell University, and then moved away.

She has since returned to her home base, living in Ulysses, less than 10 miles from Ithaca.

However, she knew being a lifelong reader and owning a bookstore were two very different things, so she attended training classes and acquired the space from a friend at 115 W. Green St.

After a two-year process, she was ready to open.  She took delivery of books on March 13 of this year, and then the pandemic forced a shutdown just days later. She was able to manage some sales through the shop’s website, and physically reopened several weeks ago, following state and Centers for Disease Control and Prevention guidelines for cleaning and social distancing.

The space might be relatively small, but Larson has arranged more than 6,000 titles in various nooks throughout, with sections for children’s books, fiction, non-fiction, and the Finger Lakes.  There’s also an area set aside with books for and about Cornell alumni and professors.

She knew from the start that she wanted the store to be “very, very centered in Ithaca,” she said. The name of the town comes from the Greek island of Ithaca in Homer’s “Odyssey.”

The store’s name also resonates for Larson on a personal level. “I left and then I came back. I felt like the odyssey for me was the vibe I was going for. Every book is a journey and shared tales and adventures, but also about being home, and finding home.”

The shop also affords Larson the camaraderie with her five staff and her customers.

“I had always known I would benefit from the voices of others,” she said. “How wonderful it is to have these wonderful voices in the store — whether it’s the community or the booksellers — and how much richer everything is because of that.”