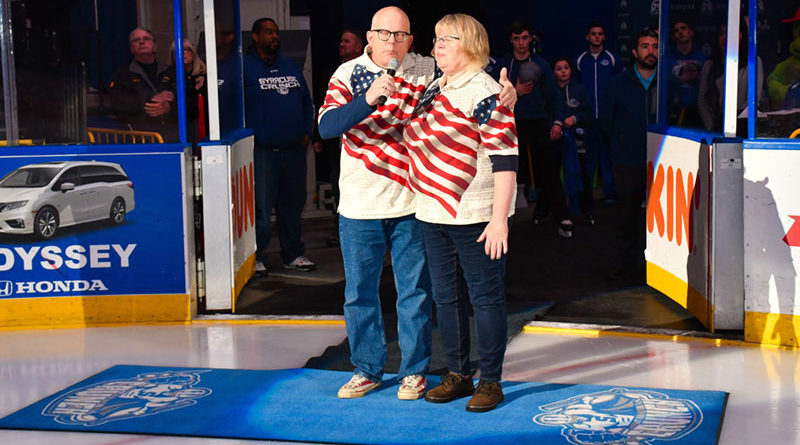 Betsy and Chuck Copps have sung “The Star-Spangled Banner” at several venues, including 88 times at Crunch games at the Onondaga County War Memorial

“I’m getting older, I should be slowing down now.”

These are phrases folks sometimes utter when they get in their 50s and 60s. But you will never hear Chuck and Betsy Copps say any of those words.

The Fulton couple — both 60 — are busier now than ever. Chuck, who grew up in Oswego, recently retired from his full-time job at Le Moyne College to pastor full time at Lakeside Christian Ministries in Fulton. Betsy, who grew up in Fulton, is the senior director of operations at nonprofit Oswego County Opportunities (OCO) and plays keyboards and sings at Lakeside Christian Ministries.

And on top of all this, the avid hockey fans often kick off Syracuse Crunch games with a rousing vocal tribute to our country by singing “The Star-Spangled Banner.”

“I remember as a child a relative saying ‘I’m too old for this,’” Betsy Copps reminisced recently. “I told myself I would never think like that.”

At OCO, Copps oversees several teams that provide administrative and support services to the agency, including information technology, safety, compliance, planning and maintenance. She also acts as media liaison and director of public relations, marketing and internet media.

In her working past, she has worked in public relations at the now defunct A.L. Lee Memorial Hospital in Fulton, been a writer for the Valley News, Palladium-Times and the Oswego County Business Magazine and has done PR work at OCO.

At Le Moyne, Chuck Copps was a facilities painter, meaning he kept all the rooms and buildings looking spic and span by giving them fresh coats of paint. He did the same job years ago at the James FitzPatrick Nuclear Plant in Scriba. Before the nuke plant, he worked at Crysteel Manufacturing near Fulton.

The couple’s turn to Lakeside Christian Ministries came through a life-changing experience in their lives.

“I am 29 years sober,” Chuck said. “In that process I learned that indeed, the Lord is keeping me sober.”

He was invited to go to Prince of Peace Church in Volney, just outside Fulton. Chuck said he realized after a while of talking to people and preaching at Prince of Peace that “this was a calling.”

He said he often relates his travels through addiction to his sobriety to people in his church or during visits to other churches. Betsy also relates her life during this time as she dealt with an addicted spouse.

“I share my experience, strength and hope from living with alcoholism whenever the appropriate opportunity arises,” Betsy said. “My sharing typically takes place in one-on-one situations. Both Chuck and I have given each other permission to share the entirety of our story whenever it is appropriate to do so, and to refer people to one another if needed.”

Today, they work a lot in the community and at other churches spreading the word and where their faith has taken them. Both raised Roman Catholic, the Copps now are involved in Bible studies, prayer groups, retreats, preaching and even working to help people locally, regionally and internationally.

“We have a relationship with about a half dozen other churches where we come to do the preaching,” Chuck said. “And through other connections, we help out in other ways like with clothing and meals when they’re needed. Jesus met with people and he’s the perfect model.”

The Copps also work with the Salvation Army mission in India, Chuck provides pastoral care for those in hospice care and he also does substance abuse counseling part-time at OCO.

“It’s important to share my sobriety story,” Chuck said. He said statistics show only one in 33 people with an addiction seek help and of those, only 5% actually achieve “some sort of sobriety.”

“This is an integral part of who I am,” he said.

The Copps are both musical folks. Betsy said she learned the piano as a child, then gave it up for a while, took lessons again and then moved away from it a second time. She also has enjoyed singing her whole life.

Chuck also loves to sing — belting out songs while at Bishop Cunningham High in Oswego during his junior and senior years.

“I have always loved to sing and have been encouraged by people all along to so for they tell me I have a nice voice,” he said. “Once in recovery, I re-discovered my love of singing, joining the choir at Prince of Peace Lutheran Church in Fulton in 1993. From that grew a period of time when I gave concerts of Christian music as well as making various appearances at community events.”

Both Betsy and Chuck loved singing so much that they formed a Christian band titled Unlimited with their two children and friend, Doug DeBarth, on drums and percussion.

“We played in various coffee houses around the area and as far away as Watertown. Betsy wrote some two dozen original songs that we played, getting copyrights on three of them, along with other popular Christian tunes of the time,” Chuck said

Their story on how they ended up singing at Crunch games at the Onondaga County War Memorial began on Father’s Day in 2001.

Chuck said both their dads were huge baseball fans, so he and Betsy planned to take the dads to the Syracuse Chiefs game. To add to their gift, they auditioned for the Chiefs hierarchy and were picked to sing “The Star-Spangled Banner.”

But then, the Father’s Day game was rained out. They rescheduled for a few weeks later and surprised the dads with baseball and a singing performance.

“Our singing, and the reason for it, had made the local papers. Because of this, folks were aware of the fact that we sang our anthem,” Chuck said.

Then came Sept. 11, 2001. Terrorists attacked the United States. Chuck said everything that happened that day and in coming weeks “drove home how blessed we are” to be in the U.S.

“After the attacks of 9/11/2001, Fulton held a community service remembering those who died on that awful day. Betsy and I were asked to open the ceremony by singing the anthem,” he said. “The whole idea sort of snowballed from there,” Chuck said.

He and Betsy knew people in the Crunch organization and they were looking for people to sing the National Anthem before each home game. Betsy and Chuck were chosen and have started off 88 games since October 2002.

And today, they are season ticket holders. They don’t sing for every game but quite often they are out there singing “The Star-Spangled Banner” and “O, Canada” for visiting Canadian opponents.

“I have never been much of a sports fan,” Betsy said. “But now we have a bit of a following. We actually go right out on the ice and get to meet a lot of interesting people.”

Chuck said people in the stands seem to enjoy his and Betsy’s rendition of the National Anthem — singing it purely and simply with no embellishments.

“During the team’s deep run in the American Hockey League playoffs finals of 2012-13 and 2016-17, we became a kind of ‘Good Luck’ charm,” Chuck said. “The Crunch won a vast majority of these playoff games when we sang for them, so they had us keep coming back! It was an exciting time as we both felt a real connection to the whole group, players, staff and management.”

Today, the Copps are still singing at sites all over, including many events in Fulton, such as the kickoff to Respect Week and Kiwanis baseball. They also won a Star Search competition at the Oswego Speedway in 2004 and were chosen as the best anthem singers from the Speedway’s entire season, singing both the US anthem and “O Canada.”

“Our prize was being invited to sing at all the racing events during the Labor Day Classic Weekend that year. We also presented both anthems for the entire 2006 season at the Oswego Speedway, again having the honor of singing for that year’s International Classic over the Labor Day Holiday as well,” Chuck said.

So now, as they begin their 60s, you can be sure the Copps are not at all close to slowing down. They will be singing and ministering throughout the area for years to come.

“There’s no end date to this,” Chuck said.