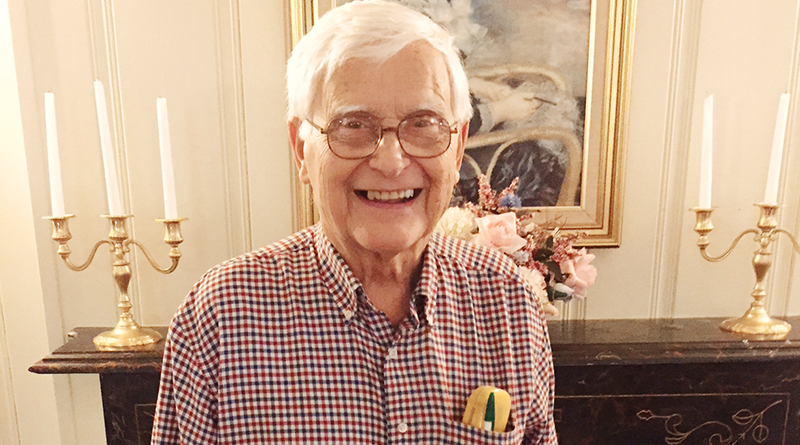 For over eight decades, Bernie Hurlbut of Rome has been wearing out pencils faster than Usain Bolt wears out running shoes.

“I guess I started when I was about 6 years old,” Hurlbut said. “My teacher said, ‘I need to talk to your parents. What would you think if someone told you that? Not good! But my teacher told my dad that I had a marvelous talent for drawing. That was a real sigh of relief to me.”

Hurlbut carried the drawing bug with him throughout high school, contributing pieces to his school’s newspaper. In study hall, he would even draw tattoos on his classmates’ arms with a ballpoint pen.

“I was quite popular,” he said.

After graduating from Verona High School in the late 1940s, Hurlbut attended Albright Art School in Buffalo. He completed art school, spent time in the U.S. Army, then returned to the Mohawk Valley to work at Nelson’s Department Store as a display man.

“What I did then, nobody does anymore,” Hurlbut said. “Everything was hand lettered. I made show cards, which had the item listed, the price, and put it in the window, that sort of thing. Then a friend of mine said, ‘You should open your own sign shop.’ I did that in 1957 and made about $30 a week. I think I had six grocery stores that I’d do signs for. I’d letter buses, trucks, cars, and posters for organizations. I’ve had a lot of fun over the years.”

Hurlbut even did the lettering on stockcar racer Richie Evans’ vehicle. Evans won nine NASCAR National Modified Championships and was elected to the NASCAR Hall of Fame posthumously in 2011. 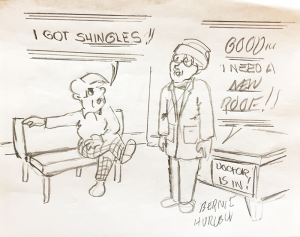 Now 88 years old, Hurlbut — along with his wife, Joan — can be spotted at any number of his favorite area diners with his trusty drawing pad in tow.

“I’ve always got a pad with me,” he said. “We went on a little trip to Lowville the other day. We stopped for some lemonade, and while I was there, I drew two pictures, and gave one to the lady standing in line. And I do a lot of drawings for kids, which is fun.”

“When he goes anyplace, he’s drawing,” his wife Joan said. “When he watches television, he’s drawing. If he could draw in his sleep, he would.”

“People are usually impressed with how fast I do them,” Hurlbut added. “My eyesight’s not as good as it once was, but I can still do this.”

“It pays to listen,” he said. “I hear things all the time and it gives me ideas. The other day somebody was talking about having shingles, which is a very annoying thing. So, I came up with a cartoon about it. All I have to do is hear something, and I can twist it around into something funny.” 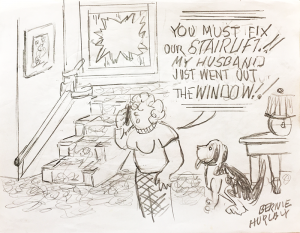 Hurlbut says he has a backlog of over 1,000 cartoons at home, each cataloged according to topic. He says he enjoys drawing animals more than people, but does occasionally venture into the political realm.

“I’ve got a political file, but I’m a little scared to use it,” he said. “There are a lot of people that hate politics.”

Hurlbut has illustrated six of his own books and has had work published in various area newspapers over the years. These days, he cartoons mostly for the fun of it, but part of his disciplined regimen is to continue trying to get his work in front of others.

“I’m always submitting work,” he said. “I’m trying to get into as many places as I can, because I enjoy it. Sometimes I make a little money to pay for breakfast, art supplies, whatever.”

“It’s a strange subject, but I do a lot of cartoons on funerals,” he added. “I contacted a local funeral director and asked him, do you guys have any trade magazines? The more you do it, the more chance you have of getting in somewhere. I take that attitude.”

On Nov. 17, Hurlbut was scheduled to appear at a special event at the New Hartford Shopping Center drawing cartoons for children. Cartoons will be free, but tips are appreciated and encouraged. 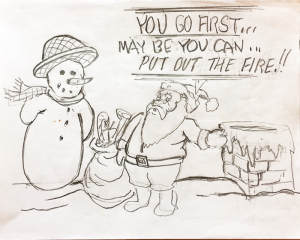 Hurlbut says the key to his longevity is to just keep the pencils moving.

“I have times when I’m not doing much, and I feel sorry for myself. But if you stay creative, you’re going to live a lot longer. Plus, my wife is behind me all the way.”

Even though Hurlbut’s eyesight isn’t what it once was, his sense of humor remains as sharp as ever.

“I wanted a new recliner,” Joan said. “So, he drew a picture of me in a new recliner, but it’s actually an electric chair. Those are the kinds of things he does to me.”