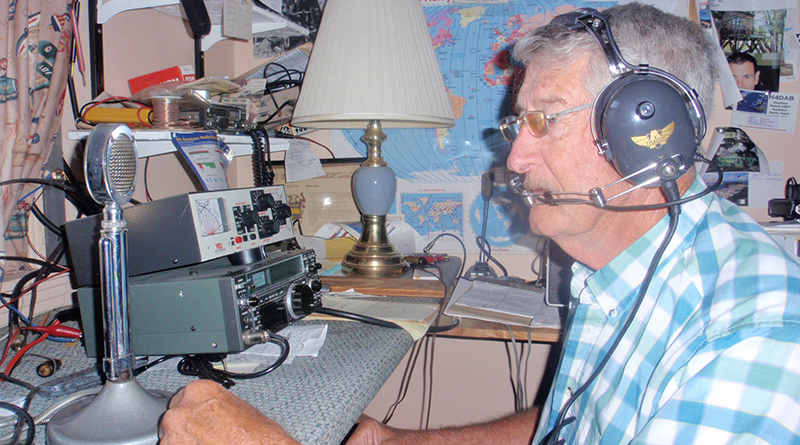 ‘We are the original digital,’ says a long-time member

You can call these guys and gals hams, but they’re anything but amateurs.

As the Fulton Amateur Radio Club celebrates a major milestone — its 60th anniversary — dedicated members reflected on why exploring invisible air waves that crackle with life remains such a thrill well after the onset of internet and digital technologies.

These folks were wireless before wireless was sexy. As longtime member Redd Swindells puts it, “we are the original digital.”

The Fulton Amateur Radio Club, formed in 1957, has never wavered in its mission: To foster interest in radio and electronics, to provide license training and testing for all levels of radio operators, and to promote the use of amateur radio for emergency communications. At any given time it has maintained at least 35 active members or more, including youngsters who are still in high school or college who have an extra special interest in communications or electrical engineering.

Swindells, 63, started tinkering at the age of 10 or 11 when he got his first transistor radio. A whole new world opened up to him in his kitchen, on a winter night after dark, when a radio announcer noted the time was 7:22 p.m. Swindells still remembers the rush he felt when he looked at his own clock at the time and noticed the time was in fact 8:22 p.m.

“It was this marvel,” the Oswego County resident recalled of his first tiny radio. “The station was in Chicago. After that, it was off to the races.”

A family friend at his church taught Swindells more about the equipment and the licensing requirements for amateur radio. It became his favorite hobby. He stuck with it into adulthood, pursuing a career as an instrumentation technician for Niagara Mohawk.

Swindells has remained a gadget guy to this day, keeping his old television vacuum tubes while also staying up to date on the latest digital technology. “I like it all,” he said.

He has checked out the ham radio scene in remote places like Surinam and Aruba, and operated his own station from there. With fewer operators there, compared to half a million in the United States, he said, “you are popular. People want to talk to you!”

Bob LaMay has been involved with ham radio for about 40 years, but, unlike Swindel, he was already a grown up when he got the bug. His children were learning about electronic devices at school. They initially turned him onto CB radio.

“It was great for a while, but we wanted to go to a higher echelon,” LaMay said. “We wanted to talk to the world.”

And that’s just what LaMay did. The 79-year-old has broadcast to France, Italy, Germany, Russia and dozens of other nationals across the globe.

“Russia was only about a year ago,” he said. “We couldn’t talk to the Soviet bloc countries when I first got into it. Now, it’s wide open. There are no limits.”

“Even with Serbia and Bosnia, you don’t get into politics, and people are happy to avoid politics. With Italy, I learned about their culture. You’d be surprised how much they love their flower gardens.”

LaMay estimates that 95 percent of ham radio operators across the world speak English, but if not, people manage to communicate. Many of the most dedicated amateur radio enthusiasts still use Morse code to bridge language barriers or make connections with low-tech devices. These days, LaMay has spent much of his time on the airways talking to South Americans. The signals seem to be very strong there, especially in the winter.

His wife, Judy LaMay, is a relative newcomer to ham radio, a “rookie” of sorts with only one decade under her belt so far. But the club relies on her heavily: She does the publicity work, submitting information on club events to local newspapers and coordinating amateur radio communications for the Oswego Triathlon. She also coordinates the club’s annual field day events, and the Mock DWI scenes at local schools where the importance of volunteer radio communication at emergency scenes is demonstrated.

“Regardless of your level of expertise,” she said, “there’s so much you can get involved with.”

The club promotes radio as a hobby, but, being located not far from a nuclear power plant, also takes its role as an emergency communication provider very seriously. Members participate in drills under the guidelines of the Federal Emergency Management Agency and various police, fire and recuse agencies. The club, which meets in Fulton once a month and is always open to new members, also has volunteer weather spotters.

“It is fun, but it’s nice to be able to help,” Swindells says. “When all else fails — if it gets down to nothing [is working], we are expected to get out there, get on the air, and find a way to communicate with people.”

Members show off their stuff at summer field day events, setting up temporary stations with the use of batteries and remote antennas, technology that would be relied on in the event of long-term and widespread power outages.

David Granoff, the club president, got involved with ham radio in 1966 at the age of 13 when he was assigned to work on a merit badge for Boy Scouts. His father was a radio operator in the South Pacific during World War II and was well-versed in Morse code. Granoff was so intrigued by the field that he stuck with it well after he outgrew that scout uniform.

He studied basic radio theory, learning how signals are transmitted from antennas to radio devices. He figured out how to put a radio together, and then gained a strong understanding of communications and networking. As Granoff communicated with like-minded hams outside of the United States, he soon learned that amateur radio is a hobby that does not divide people by politics, region, race or nation.

“It’s a universal hobby of good will,” said Granoff, a retired physician who went on to receive the highest-level license an individual amateur radio operator can obtain. The higher level licenses allow operators to access more frequencies.

Granoff also enjoys the “sport” of ham radio, which he likens to fishing. Reaching someone from another continent, especially in a country that you have never communicated in before, is an adventure. One of Granoff’s most exciting moments — perhaps his biggest fish — was communicating with astronauts at an international space station. It was a tricky feat that required him to transmit a signal at a rate of roughly 17,500 miles per hour.

Granoff says internet and digital technology actually enhances the amateur radio experience. The club presents a scholarship each year to promising young amateur operators who want to learn more about wireless technology or electrical engineering in college. It’s named after a charter member of the club, Thomas G. Cantine Jr.

Ham radio, the current club president says, is an easy sell to the next generation.

“I learned so much. It has enriched my life,” Granoff said. “I know so much, whether it was medicine or computers, because ham radio helps me to learn how things work. There’s a unique mystique about being a ham radio operator.”