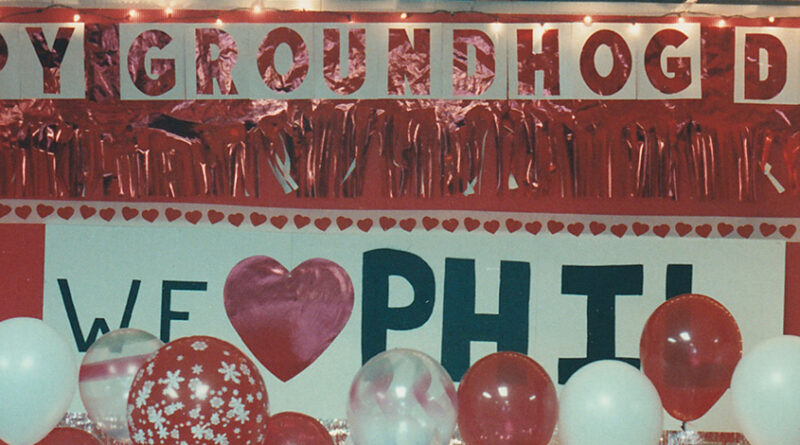 The children filed onto the wooden gymnasium bleachers and waited impatiently. A tuxedo-clad man strode to the microphone and began speaking, but his presentation didn’t include traditional school assembly themes such as the dangers of drugs or the importance of reading.

He had a furry sidekick: Punxsutawney Phil.

Why was the famous weather-predicting groundhog in Central New York?

The answer lay in a pair of art teachers dedicated to their hometown traditions and a funeral director cousin.

By coincidence three teachers with connections to Punxsutawney, Pennsylvania — a town with a population of less than 6,000 — all ended up working at the Mexico Middle School in Oswego County.

Rebecca Kendra Woods grew up in Punxsutawney and moved to Central New York in the 1980s for her first job out of college. She eventually taught art in the Mexico schools for 14 years. When she moved here she brought the Groundhog Day tradition with her. Barbara Beck Sheldon was also born and raised in Punxsutawney. She too moved to the area for a job a few years after Woods.

A third teacher, Jeanne McCloskey, was born in Punxsutawney and taught 6th grade social studies in Mexico for 25 years before retiring.

Woods and Sheldon began teaching their students about Groundhog Day and other teachers joined in. Younger children worked on groundhog crafts and art projects, such as head silhouettes that mimicked the groundhog’s shadow. Older students learned about the actual animal and studied the science behind weather. Industrial arts students constructed an 8-foot-tall groundhog.

Decorative displays were put up in the lobby.

Woods and Sheldon distributed groundhog cookies made with a special groundhog-shaped cookie cutter. Teachers and students began wearing red and white Punxsutawney Phil buttons and shorts — red and white are the school colors in Punxsutawney.

Growing up there, Sheldon says the school would have a pep rally featuring the groundhog and name a groundhog king and queen. So, she and Woods carried that tradition over to Mexico too; at the end of the day there would be a ceremony to name a king and queen.

And, in a time before the internet, each year in the morning on Groundhog Day there would be an announcement on the school’s public address system informing expectant students of the news from Punxsutawney.

Woods and Sheldon spent countless hours working on the various parts of the celebrations each year. Over time the festivities became more elaborate. Sheldon says one reason was because teachers and students alike needed a distraction during the gloomy weather.

“It was in the winter and it was just like you needed something to brighten you up,” she says.

At one point, Woods and Sheldon were even awarded groundhog ambassador credentials from their hometown for their efforts.

But throughout their years of Groundhog Day festivities they’d been missing one thing: the actual groundhog.

Woods had a cousin in Punxsutawney, Bill Deeley. He was a funeral director by day, but moonlighted as a member of the Inner Circle, the group responsible for caring for the groundhog and putting on the annual festivities.

Woods prodded Deeley, who was the groundhog’s handler at the time, to bring the critter to Mexico. In 1994, he finally caved and agreed to make the 300-mile trip up from Punxsutawney.

The timing couldn’t have been better. Interest in Groundhog Day was at a fever pitch then, driven by the immense popularity of the 1993 Bill Murray comedy “Groundhog Day” in which a mean-spirited TV weatherman becomes trapped in a time loop in Punxsutawney.

When Woods and Sheldon were growing up, Groundhog Day was a much more subdued affair. If 500 people gathered at Gobbler’s Knob outside of town for the early-morning ritual that was considered a large crowd. Today, up to 30,000 people descend on Punxsutawney when the holiday falls on a weekend.

Not everyone was excited for Phil’s visit. The middle school principal was more than a little nervous about the prospect of letting a live groundhog into the school. But Woods assured her principal that her cousin gave similar presentations all the time and would be careful.

And so Deeley traveled to Central New York with Phil. He stayed the night before at Sheldon’s house. She had sent her two large dogs away so they wouldn’t try to eat the groundhog. When Deeley arrived Sheldon and Woods were shocked to discover that the groundhog was housebroken.

The groundhog got to run loose in the house and was soon shredding toilet paper and baskets of potpourri. He also made himself at home behind a dryer.

“I’d hear him gnawing, I mean gnawing hard,” Sheldon says. “So, Bill would go back there and dig him out from behind the dryer.”

The next morning Deeley and Phil did a presentation at the middle school. He told how Phil is coaxed out of his burrow each year and if he sees his shadow, his prediction is for six more weeks of winter. If he doesn’t see a shadow, that means there’ll be an early spring.

He explained how the tradition traces its roots to the Christian holiday Candlemas (Feb. 2). According to legend, clear skies on Candlemas meant an extended winter. The Roman legions brought it to the Germans, who concluded that if the sun made an appearance on Candlemas, a hedgehog would cast a shadow, thus predicting six more weeks of bad weather. Some of Pennsylvania’s earliest settlers were German, and they carried on the tradition with a groundhog instead of the European hedgehog.

After the presentation Deeley invited the kids to pet Phil. Woods stood nearby, hoping nothing would go wrong.

“I don’t know how many kids he allowed to pet Phil,” she says. “I really was kind of nervous about it, but it all worked out in the end.”

Deeley had tucked Phil’s head down a bit to help keep him calm as the kids petted him, Woods says. And Deeley told her he knew from experience that when the groundhog began getting squirmy it was a sign he’d had enough. Woods breathed a sigh of relief when Phil was back in his cage.

Later in the day Deeley visited New Haven Elementary School with Phil, bringing plastic top hats for the kids similar to the ones worn by the Inner Circle. The younger students were even more excited to meet Phil than the middle schoolers had been.

“Every classroom that little sucker went in with Bill, all the kids were just going crazy over him,” Sheldon says. “They all got to come up and see him close and some got to pet him.”

Woods, 61, and Sheldon, 60, both recently retired from teaching. Getting Punxsutawney Phil to visit their school remains one of the more memorable episodes of their careers. But it wasn’t the last either of them heard from Punxsutawney Phil.

Several months after the visit, Sheldon’s dryer broke. When she called a repairman, he somberly informed her she must have a problem with rats, big rats. Only rats could have chewed a giant hole clean through her dryer house, he reasoned. Sheldon told him it was actually the work of a famous groundhog.