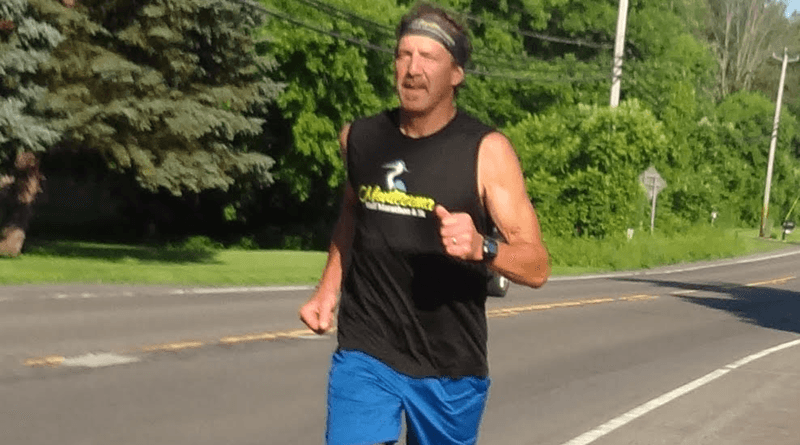 Mike Samoraj getting ready for the 140.5 mile endurance race in Lake Placid — 2.4 miles of bicycling, 112 miles of swimming in open water, and a 26.2-mile marathon run

While chalking up triathlons 15 years ago, Mike Samoraj told himself, “Someday I’m going to do the Ironman.” Two years ago, he realized the time was now. In the past several months he increased the amount of time training for the Lake Placid Ironman, scheduled for July 28.

At the age of 60, Samoraj is living what he likes to tell others who hesitate to challenge their senior bodies, “You’re as good as you’re going to be.”

The Ironman is the ultimate triathlon, a 140.6-mile endurance race made up of three events in sequence — 2.4 miles of bicycling, 112 miles of swimming in open water, and a 26.2-mile marathon run.

Due to its hilly course in the Adirondack Mountains, the Lake Placid Ironman is considered one of the hardest, said Toby Heath, Samoraj’s coach. So arduous is the event that 40 finishers can claim qualifying slots for the world-renowned Ironman World Championship in Kailua-Kona, Hawaii. In Lake Placid, about 2,500 athletes — including Samoraj — were expected to take to the hills and the beautiful waters of Mirror Lake.

Samoraj has been running all his life. He swims at the Baldwinsville YMCA and has done his share of bicycling. Yet now that he was preparing for 140.2 miles of all of it together, he muses, “I didn’t realize what it would be like. Multiply an hour or two by eight hours, by 10 hours, by….” His voice drifts off, probably because he’d rather not think about it and just do it.

A few days before this interview, he biked 100 miles. At the Baldwinsville YMCA, he was planning to swim 100 to 160 laps in one go-round. (160 laps equal 2 miles.) On Father’s Day, he celebrated his fatherhood by completing his own personal three-quarter Ironman: a 2-mile swim, 84-mile bike ride and 17-mile run.

Surprisingly, given the challenge that faces him on July 28, Samoraj did not train every day. After that Father’s Day trial, for instance, he rested for two days. As his coach Heath says, “Rest is important because your body breaks down under physical strain,” adding that athletes in extreme sports need time to restore themselves.

As comrades in running, Samoraj and Heath have known each other for years. When Samoraj first decided he would aim for the Ironman, he had not thought of having a coach, but realized that preparing for an athletic commitment of this scope required a more serious and professional dimension. For that, he needed Heath, who himself has done five Ironman events.

Prescriptive workouts, including weight training; distance guidelines; rest periods; fueling — “like, what do I do when I get hungry?”— are areas of Heath’s expertise that Samoraj was not tuned into before. And, although there are days when Samoraj says, “I feel like I’m 30 years old,“ Heath knows that physical strain is greater and recovery time takes longer for athletes as they age. So Heath can flash the red light for Samoraj to slow down when Samoraj might not want to. Samoraj’s diet has changed, too. He’s scaled back on sugar and carbohydrates and eats more protein and plant-based foods.

Intense physical activity of all kinds is a family affair for the Samorajs.

Samoraj’s wife, Michelle, is a marathon runner, and among his four children who range in age from 15 to 31, a son and a daughter have run multiple marathons. His 15-year-old son plays football. One of the family’s goals is to climb the 46 peaks of the Adirondacks.

During vacations, which should be relaxing, it is not unusual for the family to organize an informal “Olympics.” Samoraj gets a laugh out of friends whom they hosted once at their Adirondacks camp, who subsequently had a T-shirt printed with the exclamation, “I survived the Samoraj “Snap Your Ankle Like a Cold Carrot” Tour.”

That said, Samoraj’s life is not just about his own athleticism and Ironman training, as demanding as that may be.

After 36 years in the financial services sector, he is now co-owner of Willow Health and Wellness Center with his wife. Willow Health and Wellness has centers in Baldwinsville and in Camillus, and offers fitness classes in adult and children’s yoga, tai chi, palates and more. Wellness services include acupuncture, chiropractic, medical weight loss, nutritional counseling, qiqong, reiki, and therapeutic massage.

As devoted runners, Samoraj and Michelle also offer a series of Willow Runs. “Attention Half Crazy Runners!” is the way the Willow Health and Wellness Center website recruits participants for their half marathons scattered throughout Central and Northern New York. They also offer 5K’s and 1-mile family fun runs with catchy titles like the Cannonball 5K and 1-mile run in Auburn; the Shortcake at Abbott Farms’ strawberry season in Baldwinsville; the Harvest Challenge at Emmi Farms in Baldwinsville, and, to add some zany exercise to the Christmas season, the “Ugly Sweater 5K’s!”

Samoraj now even holds an informal weekly running event at the Baldwinsville Farmers’ Market — because, oh yes, the Farmers’ Market in Baldwinsville is another thing that Samoraj does. He and Michelle are the organizers of the market, held from 3 to 7 p.m. every Tuesday of the season behind the B’ville Diner, in a setting of colorful canopies and wafting aromas of popcorn and pizza.

“The market forces me to sit still!” Samoraj says, although, as observed on a recent market evening, he really sat still only long enough for a portrait of him and Michelle, drafted in broad bold strokes by a market artist. After that, he circulated among the families clustered among the concessions or handed out flyers and magazines at the wellness table — or spread the word about the informal run to start at 5:30, while all the time marveling at scenes which the average person might consider commonplace. “Look at these guys and their pizza!” he cheers, beaming at a circle of youngsters on the ground grabbing their gooey slices from the pizza box. “How about some lemonade?” he asks, as if lemonade is a treasure. For the moment, Samoraj is like a master of ceremonies, and the market is the greatest show on earth.

Whether it is the Farmer’s Market, the Willow Health and Wellness Center, the Ironman, or just a run around the neighborhood on market nights, Samoraj finds a way to get the community involved. Engaging people in wellness and enjoyment is an important value for him. He is proud that some of the people who now participate in the fun runs at the Farmers’ Market haven’t run in years and now get out and exercise. And age? The Montezuma half-marathon that Willow organized this summer had 10 registered runners over the age of 70.

“It’s never too late to go after an aggressive goal,” Samoraj says. “Setting lofty goals is not only good for the body but great for the mind.”