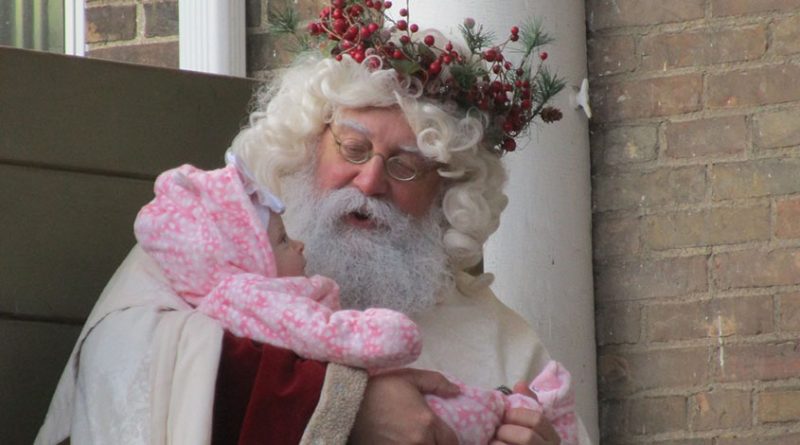 Portraying the Jolly Old Elf requires people skills, an engaging personality and a boatload of patience

It takes more than a red suit and white beard to play Santa for children, or, at times, grownups.

As these professional Santas attest, portraying the Jolly Old Elf requires a few people skills, an engaging personality and a boatload of patience.

Kevin Pelletier, 57, has portrayed Father Christmas for Dickens Christmas in Skaneateles for 22 years. A resident of Enfield in Tompkins County, he also performs as a Scotsman at the Sterling Renaissance Festival. As his day job, he works as a computer support professional for GrammaTech in Ithaca.

Pelletier has played Santa at Fort Drum and for private and corporate parties. He belongs to a Clan Claus, a worldwide Santa organization for people of Scottish descent who play Santa or Mrs. Claus.

The oldest of seven children, Pelletier watched all his younger siblings grow up and receive gifts at Christmas. Playing Santa extends that experience, as he has no children of his own.

“I love the smiles on children’s faces,” he said. “By ‘children,’ I mean everyone from 5-day-old babies to the lady who was 103. Just seeing their faces light up is what gives me that little rush to keep doing it.”

Pelletier wears his natural beard. He uses make-up, so it appears completely white for a traditional Santa look, “but I’m getting closer to where I won’t have to,” he said.

Before he took on his role of Santa Claus, Pelletier contemplated how he would act when greeting children and their families.

“Kindness is your main focus,” he said. “I want to see a child smile, not cry or be afraid. I’m as calm and gentle and I read the faces of the children and try to interact with them in a way that makes them happy. I never force a child to do anything they don’t want to.”

He wishes that people would not pull his beard to see if it’s real.

“The majority of those are middle-aged women who tug and say, ‘Oh, look, it’s real!’” he said.

Sometimes his wife, Tracy, dresses up as Mrs. Claus to accompany him, as some children feel more comfortable with Mrs. Claus.

He takes his role seriously, as for many people, meeting Santa and sharing their requests means baring their hearts. He has been part of wedding proposals, for example, by distracting the girlfriend while the boyfriend slipped down on one knee to pop the question.

“I said, ‘I was talking with the ghost of Christmas Future and he seems to think you have something good coming your way,’” Pelletier said.

During the Gulf War, he had several children whose parents died in the conflict and asked him to bring them back. Others whose parents were sick ask for their return to good health for Christmas.

“Quite often, if the family appears religious, I’ll offer to pray for them,” Pelletier said.

He never promises anything to children, not even toys. Sometimes children ask for expensive items.

“I see the parents’ faces drop when the kids ask for a PlayStation,” Pelletier said. “Most Santas would say, ‘I’ll see what I could do.’ But I’ll say, ‘I’ve had a lot of people ask for that so if I run out, I’ll bring you something else you’ll like.’ I never promise them that gift. It would not be right to promise something their parents cannot come up with. I know what it means to do what you can. Some of the simplest gifts I got as a kid were my favorites as that’s all my parents could afford.”

Some children ask for nothing for themselves but want children in need to have something for Christmas. Some are demanding and some are shy. With the latter, Pelletier never pushes for an interaction, but waits for the children to come to him. He understands that mall Santas are often limited for time, but he usually has plenty of time to wait for bashful children to warm up to him.

“I try to give each a candy cane if they won’t come talk with me,” he said.

One girl was frightened of any Santa and would not approach him. Pelletier engaged her in conversation from a distance and offered her a candy cane.

The family got their photo and the next year, the girl eagerly hopped on his lap and hugged him.

“Her father said I’m the only one she’ll go near,” Pelletier said.

He played Santa for a family a few years ago who had suffered a financial setback. Friends of theirs had purchased gifts and Pelletier delivered them on Christmas Eve. These interactions remind him of why he portrays Santa.

“I’ve seen children 5 days to a lady 103 years old,” he said. “She looked at a bunch of people scoffing at her for seeing Santa and she said, ‘If you can’t suspend your disbelief at Christmas to sit on Santa’s lap, why do you keep living?’”

Featured Image: Kevin Pelletier, dressed as Father Christmas for Dickens’ Christmas in Skaneateles cradles a baby in his arms. “I love the smiles on children’s faces,” he says.