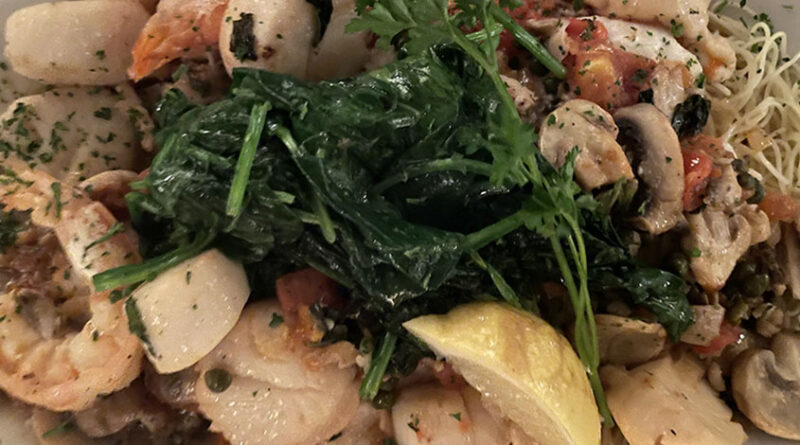 It’s been a while since the last time I’ve dined at Lasca’s Restaurant in Auburn.

Even just sitting down, it felt long overdue in a darkened room of the dining area.

From walking in and being seated, to our servers’ (one was training) greeting and the on-point refilling of our water glasses, Lasca’s didn’t miss a beat with the first and continual impressions.

The staff was incredibly friendly, exuding professionalism and simply down to earth.

To kick the meal off: complimentary rolls and hot tomato dipping oil. The mildly spicy sauce was not overly seasoned. It separated itself from the other Central New York tomato oils in a good way — and dare I say better?

There’s enough oil there to go through two baskets of rolls, if you so choose.

We know, because it happened. Call this a dining out rookie mistake; feasting on the Lasca’s-made carbs, but it was worth it.

As delicious as beef with lobster, goat cheese and greens sound, the tender marinated beef on our plate was delicious. The tender beef was accompanied by sautéed spinach and white beans.

For entrees — surf and turf. As it was Friday, it’s one of the two days (Saturday is the other) when Lasca’s offers prime rib. We ordered the king cut with au jus ($43), so my wife and I could easily share.

Similar to John Candy’s Chet Ripley character in “The Great Outdoors,” a masterful and proud cut of meat was placed down in front of me. It was no “Old 96er,” but it was aesthetically intimidating.

The medium rare beef was cooked perfectly and was wading in a puddle of au jus. The broth boasted the perfect amount of saltiness and let its flavor speak for itself. The horseradish sauce on the side was a medium-intensity creamy compliment.

I opted for a baked potato with sour cream as a side and it was baked very well, meaning the skin of the potato wasn’t rubbery and the sour cream made it even better.

Why get one dish of particular seafood when you can try many? The seafood medley ($37) featured broiled haddock, shrimp and scallops atop angel hair and covered with a lemon butter white wine garlic sauce. The pasta of the sea dish was joined by tomatoes, capers and mushrooms.

There was a lot of flavor of what could be my favorite seafood pasta dish I’ve had in a while.

The seafood was fresh; the three components didn’t smell or taste briny. The lemon was subdued. Because of that, the sauce really stood out. For the amount of food on the plate, it was overall a light entrée.

The only downsides included mislabeled prices for the beef tenderloin appetizer and king prime rib, which were both a couple bucks more. Along with the two beers ($8 each), mislabeled prices, the credit card processing fee ($3.95) upped the bill to more than $131.

The service fees are more common nowadays, which can be easily, secretly factored into the food.

Those are something we just have to grin and bear. But the mislabeling of menu items is something that can be avoided and corrected.

Regardless of writing reviews, I’m typically patient and accepting of this. Other people may not be. But it was the only thing that left a bad taste.

The 30-plus year tradition continues for Lasca’s.

Keep in mind the restaurant fills up, so reservations are recommended. For those who don’t want to dine in, the restaurant offers an easy, great carry-out service.