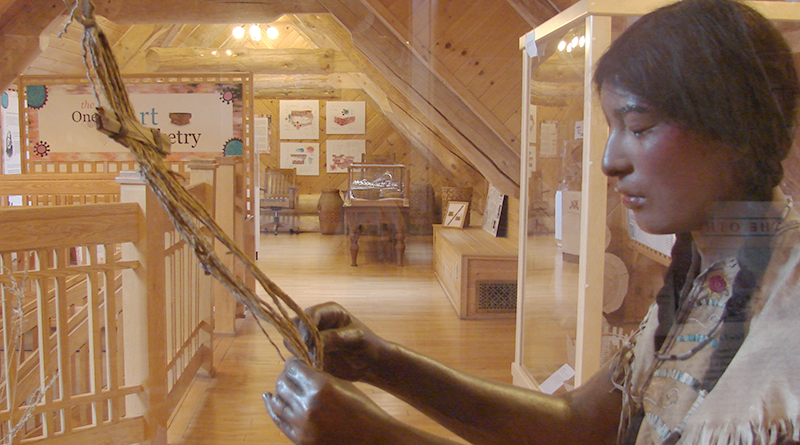 The Iroquois, also known as the Haudenosaunee, were originally called the Five Nations — the Mohawks, Oneidas, Onondagas, Cayugas and Senecas — but were later joined by a sixth nation, the Tuscarora. The original homeland of the Iroquois was in New York between the Adirondack Mountains and Niagara Falls. Through conquest and migration, they gained control of most of the northeastern United States and eastern Canada. They formed a remarkable political and diplomatic organization called the League of the Iroquois, which united the Five Nations. So impressive was the league that drafters of the United States Constitution, including Benjamin Franklin and Thomas Jefferson, included ideas from the league — such as balance of power — in the US Constitution.

There are several places in New York state to learn about the Iroquois; many have special events and several are seasonal.

1  National Museum of the American Indians, New York City: The museum located in lower Manhattan is part of the Smithsonian Institution. It is housed in the Beaux Arts Alexander Hamilton Customs House, which is of interest in its own right. The collection has thousands of artifacts, some dating back 12,000 years, detailing the life and culture Native American groups from the Incas to the Iroquois. Take note of the unique Incan Talking Strings used to recorded information. There is no admission charge.

2  New York State Museum, Albany: The South Hall is devoted to the first New Yorkers. There is evidence that the New York region has been inhabited for at least 13,000 years. Dioramas, displays of artifacts and art, and other exhibits span from the inhabitants from the Ice Age to the present. The museum has artifacts gathered by the Seneca anthropologist, Arthur C. Clark, who wrote, “Parker on the Iroquois,” considered the definitive book about Native Americans in New York state.

3  Iroquois Indian Museum, Howes’ Caverns: Located in Howe’s Caverns, the museum, housed in a building reminiscent of an Iroquois longhouse, is devoted to the art and history of the six Iroquois, including featuring present-day artists. The outdoor is used for storytelling, talks and various performing arts. There is a special children’s area and a 45-acre nature park.

4  National Kateri Shrine, Fonda: The shrine pays homage to Kateri Tekakwitha, a young Mohawk woman born in 1656, who converted to Christianity and even though her beliefs caused many hardships in her life she dedicated her life to helping others and spreading Christianity. Kateri, referred to as “The Lily of the Mohawk,” was the first Native American woman to be honored with sainthood. There is a hillside Stations of the Cross leading to a statue of the Blessed Virgin, Blessed Kateri and other saints.  A self-guided tour booklet is available in the gift shop.

5  Fenimore Art Museum: The Cooperstown museum has dedicated one wing to the Eugene and Clare Thaw’s collection of American Indian Art. The collection represents a broad range of North American Indian cultures, including paintings of Joseph Brant, a Mohawk military and political leader who played an instrumental part during the American Revolution. The museum also has outdoor displays of Iroquois housing and hosts special Native American events.

6  Shako-Wi Cultural Center, Oneida: Built in 1993, the center is located near the Turning Stone Museum. It is designed to give visitors — Oneidas and non-Native Americans — pride and understanding of the Oneida’s roots and heritage. At one time, basket-making was a source of survival. They have one of the best-documented basket collections, including nearly 90 baskets dating from the 1800s and early 1900s. Learn about the traditional crafts: basket making, shaping a stone arrowhead, carving a wooden bowl, making moccasin and ceramic pottery.

7  Akwesasne Museum, Hogansburg: Located on the lower level of the Hogansburg library, the museum focuses on the Mohawks now and in the past. Interesting is their high steel work in NYC building the skyscrapers and their skill in basket-making. Basket making has remained an unbroken tradition over time continuing their strong tie to the land. The materials are harvested from forests and fields in the area. The Akwesasne have the greatest number of basket makers in any one community among the Six Nations Iroquois Confederacy.

8  The Great Law of Peace Center, Liverpool. Once the site of Sainte Marie among the Iroquois, the center has been completely renovated and is now the Skä•noñh-Great Law of Peace Center, a Haudenosaunee cultural center. All of the exhibits are brand new but the recreated mission remains. The heritage center tells the story of the Iroquois from the perspective of the Onondaga Nation. The Onondagas, or People of the Hills, are the keepers of the Central Fire and are the spiritual and political center of the Haudenosaune. Learn about how the world came to be according to the Haudenosaunee and the importance of Hiawatha in the making of the Great Peace.

9  Ganondagan State Historical Site, Victor: It’s located near Rochester on a site of what was a flourishing Seneca community. The Seneca’s matriarchal society helped inspire the 1848 Declaration of Sentiments that led to voting rights for women. There is a new state-of-the-art museum plus  a 17th-century Seneca bark longhouse, .Walk miles of self-guided trails, climb the mesa where a huge palisaded granary stored hundreds of thousands of bushels of corn, and learn about the destruction of Ganondagan, Town of Peace, in 1687.

10  Seneca-Iroquois National Museum, Salamanca: The museum has more than a million objects in its collection, including ethnographic and archaeological materials along with photos and information about the Seneca, “The Keepers of the Western Door,” and a cut-away version of a longhouse and a log cabin. Another exhibit shows life in a log house from the once-thriving community of Horse Shoe. Outside the museum is a mortar stone where corn and other items were ground. The Seneca were the largest group within the Confederacy.