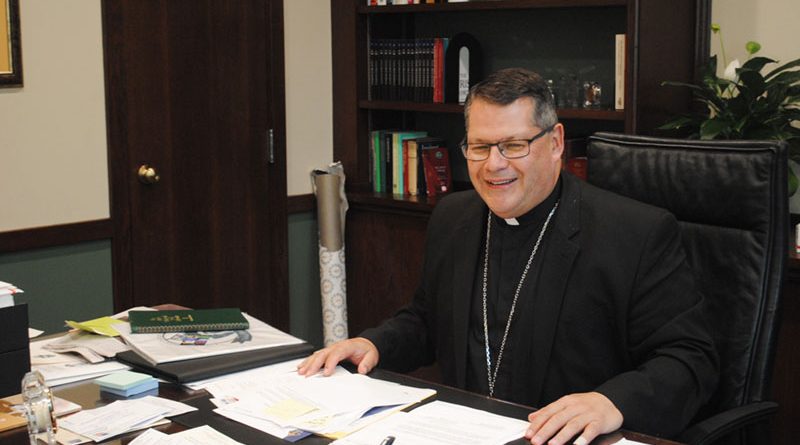 Father Douglas J. Lucia was ordained and installed Aug. 8 as the 11th bishop of the Roman Catholic  Diocese of Syracuse, succeeding Bishop Robert J. Cunningham, who had served for 10 years

Father Douglas J. Lucia had finished saying Mass this past Memorial Day weekend, when he saw on his cell phone that he had missed two calls from Washington, D.C.

A bit puzzled, but knowing that his bishop in the Ogdensburg diocese, Bishop Terry LaValley, had received a call from Washington the previous day, Lucia texted LaValley to ask him if he knew what this might be all about.

LaValley texted back, his message in bold: “Make the call.”

Needless to say, he did, and it would change his life.

The call was from Archbishop Christophe Pierre, the Vatican’s representative in the United States, also known as a Papal Nuncio, telling Lucia that Pope Francis had selected him as bishop.

Lucia recalled that he was momentarily speechless and was asked by the Nuncio whether he accepted the appointment or not.

Of course he accepted, and on Aug. 8 in the Cathedral of the Immaculate Conception in downtown Syracuse, Lucia was ordained and installed as the 11th bishop of the Diocese of Syracuse, succeeding Bishop Robert J. Cunningham, who had served for 10 years.

Lucia had served as a parochial vicar and administrator in several parishes in the Ogdensburg diocese and Canada and was a part-time chaplain at Gouverneur Correctional Facility. Over the years, he has held other positions in that diocese, including secretary to the bishop, diocesan director of vocations, episcopal vicar for diocesan services, and diocesan director of seminarians.

When asked if he knew why he was selected by Pope Francis as bishop of the Syracuse Diocese, he said he didn’t, but added, with a laugh, that “when I see him in a couple of weeks, I’m going to ask him.”

And indeed, he was slated to see the pope in September. All new bishops throughout the world gathered at the Vatican to attend a 10-day school, and on the final day, they have the opportunity to meet the pontiff.

Lucia explained the selection process. The bishops of New York state compile a list of three or four names of possible candidates in the event of a vacancy.  When there is an opening, they send the list, called a terna, to the Congregation of Bishops. Ultimately, the terna is sent to the pope, who makes the decision.

As bishop, Lucia directs the seven-county diocese, which includes Central New York, the Mohawk Valley and the Southern Tier, and features more than 225,000 Catholics and 114 parishes. But he sees his role as much more than that of a CEO-type.

With this, Lucia has taken “In the name of Jesus” as the motto of his ministry. “Whatever I do, it’s about continuing the mission of Jesus himself. Jesus’ mission was to reach out to people where they were at, and he wanted to help heal, wanted them to know forgiveness, wanted them to know they were cared for, so for me, those words are a constant reminder of what I’m supposed to really be about,” he said.

Every bishop in his own diocese, he said, is like a pope, or pontiff, another term for pope. The term, “pope” comes from papa or father, and a translation of “pontiff” is bridge builder, he noted. “He’s meant to be that bridge builder,” Lucia said.

To build those bridges, Lucia plans to get to know the diocese and the people, who, he said, are the diocese’s biggest asset.

“The people have been wonderful to me. They’re just wonderful. I know I’m blessed,” he said.

But Lucia knows the challenges facing the church, for example, the decrease in vocations, the staffing of parishes, and the sex abuse scandal.

In a letter to the diocesan parishes dated Aug. 10 — just two days after his ordination — he addressed the scandal and the Child Victims Act, which allows for a one-year time frame for victims of child abuse in New York state to pursue litigation. He said the diocese has made strides in “trying to acknowledge its failures and seeking to insure that our children area safe.” He also wrote that, in the name of the diocese, he apologized to the victims for “the heinous acts perpetrated against them” and offered to meet with them if he could be of help.

In addition, the Syracuse diocese, like so many others, faces fewer people entering the priesthood and consecrated life. This, along with a decline in population, impacts the staffing of parishes. Many parishes in the area have merged or linked with others nearby, and this sometimes can create hard feelings among those who have been long-time parishioners at a particular church.

“For me, the challenge is how do we help people to still feel at home, even if we have to do some reconfiguration,” he said.

The first way that Lucia contends with these situations is through daily prayer.

“My day begins with prayer because I know I can’t do anything without that. That’s the fuel for whatever I do in a day,” he said.

After that, he said the way he has been trying to deal with the challenges, whether it’s vocations or the sex abuse scandal, is “to live the life of a priest.”

Douglas J. Lucia reigns as new bishop for Syracuse Diocese, which covers Central New York, the Mohawk Valley and the Southern Tier, and features more than 225,000 Catholics and 114 parishes

“In vocations, this is truly a calling from God. It is a good life in that sense. The priesthood is a wonderful life. But on the other hand, the sexual abuse crisis has shown us the weaker side, the darker side of human nature,” he noted.

He likened the commitment of the priesthood to that of married life, and believes priests should wear a ring like a wedding band.

“When we’re ordained, we are marrying ourselves to the church. That’s our commitment. Just like in married life, just like the way a husband and wife treat one another matters, so the way I live my life as a priest matters. And it’s when you ‘cheat,’ that’s where the trouble comes in. That’s the way I look at it,” he said.

Lighter side of Lucia

As serious as Lucia is in fulfilling his duties and meeting his obligations, he has a sense of humor that was evidenced, for example, at his ordination ceremony.

During his remarks to the congregation, he swapped out the traditional violet-colored zucchetto, a skullcap often worn by bishops, and for a short time, sported an orange one given to him in honor of his move to Syracuse, the home of the Syracuse University Orangemen. But he assured those gathered that a green one, to recognize Le Moyne College, was on the way.

When asked how anyone could argue a call made by a bishop, Lucia simply responded with a hearty laugh.

Lucia marks his 30th year in the priesthood this year, having been ordained in 1989, but he admitted that as a boy, he also had aspirations of entering other professions as well.

“When I was kid, I thought about being a priest. I also thought of being a policeman. As I got older, I really thought about wanting maybe to be a lawyer,” he said.

Lucia and his twin brother, David, were born in Plattsburgh on March 17, 1963, to Leward and Betty, and grew up in Altona, about 25 miles west of Plattsburgh, along with a sister and younger brother.

His parents, both 91, still reside there. He received his bachelor’s degree from Wadhams Hall Seminary College in Ogdensburg and a Masters in Divinity from Christ the King Seminary In East Aurora, near Buffalo. While he was in theology school, his brother, David, had gotten married, and Lucia thought that perhaps he, too, wanted to have a wife and family.

He recalled that at the time he was trying to figure things out, he had been working in a soup kitchen in a parish in Buffalo. He said he had pretty much decided he was leaving, but then he had what he called a “moment of change.”

“Working in the soup kitchen, there was one moment where I knew what the Lord wanted, and as I tell people, ‘here I am today,’” he remarked.

He had been doing the dishes at the kitchen, when the nun in charge of the kitchen told him to go out and wait on tables. He said he really didn’t want to and tried to convince her that there were still a lot of dishes to do. She wouldn’t be swayed.

“I went to wait on tables. The lunch was a bowl of soup and sandwich. I remember getting to one gentleman. I was just putting the bowl of soup and sandwich in front of him, and I just simply heard the words, ‘The body of Christ. Amen.’ That moment I knew what was being said and it was a moment of deep peace, a peace that I still have to this day. I just knew this is what God wants.”