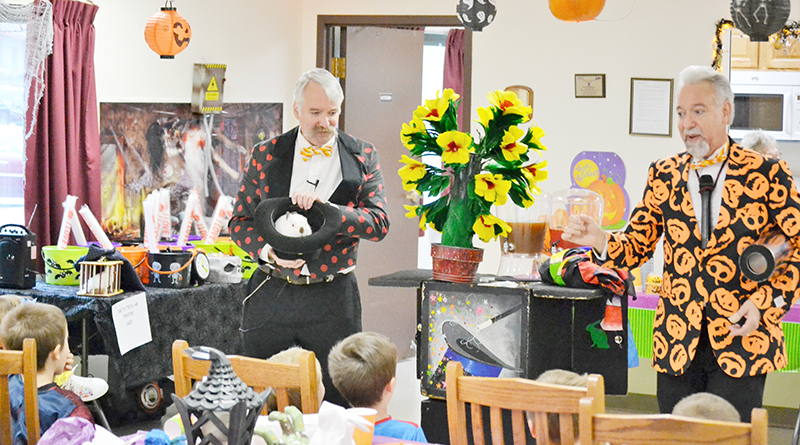 Cicero brothers have entertained audiences for more than 40 years. For them, magic is a way of life

Paul Jackman hands a girl a strip of white tissue paper and instructs her to follow his lead. They each fold and tear their piece of paper several times. But when something goes wrong and the pieces aren’t magically restored, Jackman suggests they put the shredded paper in their mouths.

With that, he pops the balled up tissue paper into his mouth and poof! Out comes yard after yard of dry paper streamers. The children squeal in excitement.

Paul and David Jackman have crisscrossed Central New York for decades entertaining audiences. Billing themselves as the Twin Magicians, the identical twins have been performing together for more than 40 years.

The Cicero brothers focus on magic, but they’re also experts in juggling and fire-eating. They can twist balloons into hats, swords and just about any animal imaginable. And they travel the country putting on game shows for colleges and universities.

Magic is their bread and butter though and, after years performing in the area, they get a lot of repeat business. Recently the magicians performed at a birthday party for the daughter of a woman whose birthday they’d performed at 24 years earlier.

“So that makes you feel old,” Paul says with a laugh. “It was neat though.”

“It’s nice that they have fond memories though and want to pass that on,” David says.

The Jackmans grew up in Fayetteville and got their first taste of magic when they were just 5 years old, watching a magician perform at a Cub Scout Blue and Gold Banquet.

“And we were both so enthralled that my mom hired the same magician to come and perform at our sixth birthday party,” Paul says.

They were hooked from then on. Paul obtained his first magic kit — produced by famed magician Harry Blackstone Jr. — by collecting and mailing in the box tops off Jiffy Pop popcorn. They began learning magic and in the early 1970s, when they were 12, started performing shows together. But magic remained squarely in the realm of hobby until they reached their teens.

They joined Ring 74, the local chapter of the International Brotherhood of Magicians, and soaked up lessons from older members. Lectures by professional magicians stoked their interest as well. After one such lecture David went home, rounded up a few softballs and taught himself how to juggle on the spot.

As teens, their mother took them to nursing homes each month to perform for the residents, which gave them experience in front of audiences. From there they moved on to performing at birthday parties.

“So we were doing quite a few shows even then,” Paul says.

In 1976, while still in high school, they landed jobs at the Sterling Renaissance Festival after a magician from the local magic club couldn’t finish the festival’s 14-week run. The brothers still relied on their parents for rides to and from the festival. They performed as many as five shows a day, two days a week. It was hard work, but they loved it and it gave them even more experience in front of audiences.

“You had this whole group of people that were playing with you, 60 to100 people who were all working toward the same thing,” Paul says. “There was a huge amount of camaraderie.”

They played the festival each summer for a decade after that first year.

After graduating from Fayetteville-Manlius High School and then Onondaga Community College, the brothers did different jobs. The renowned Ringling Bros. and Barnum & Bailey Clown College accepted David into its program. He toured with Cole Brothers Circus for a year. He later worked at the Hotel Syracuse and did magic shows part time. When the hotel closed, David joined Paul full time.

“So we did other things, but we also kept doing the shows and then finally, after about 10 years of doing that, we decided OK let’s see if we can actually make a living at it,” Paul says.

There’s a saying that family and business don’t mix well together. And magic lends itself to creative differences between magicians.

But after 46 years performing together, Paul and David say they get along well and have never had a disagreement remotely serious enough for them to contemplate splitting.

“I don’t know that we would’ve stayed working together if we weren’t so close,” David says.

“He’s my twin brother,” Paul says. “We get along; we know each other really well. It’s like growing up with your best friend.”

As it turns out, the biggest challenge they face working together is scheduling their shows. They use a shared calendar to help keep track of each other’s availability, though they’ll work solo on occasion if necessary. Game shows sometimes demand two people to run and help with loading all the equipment in and out. There are advantages to working with a partner besides being able to divide the work. If a microphone fails or a trick fizzles, for example, there’s someone on stage to step in and help, Paul says.

Because they’re so in tune with each other, it’s easy to rely on the other person’s judgment during a show and to add or drop tricks based on the audience’s reaction. That also means they usually know immediately if a new trick they’re practicing is going to work, David says.

Despite being a double act and occasionally finishing each other’s sentences during shows, each brother has his own specialties, many of which manifest themselves during performances. Paul is more theatrical and outgoing. During shows, he does more of the talking and often narrates tricks with the energetic self-assuredness of a radio pitchman. David is soft-spoken and fancies himself more of a technician. He’s a stronger juggler and has spent decades perfecting the Chinese linking rings, a classic illusion. David also has lock-picking skills.

Through thousands of shows, they’ve honed their performance into a seamless, polished piece of entertainment. Nearly every joke hits its mark. The impressiveness of the tricks builds throughout the show. If a trick goes wrong the recovery is so seamless that it almost seems to the audience that it was part of the show.

“We know each other so well, even closer than family I would say,” David says. “It’s really much easier to have somebody who you know and can rely.”

Legions of people take an interest in magic, learning to perform a few tricks. Thousands enthusiastically pursue it as a hobby. Few people succeed as professional magicians and most rely on scale to make a living.

Paul and David do between 200 and 250 shows a year. About a third are birthday parties the magician’s bread and butter. Another third are college game shows. The remainder include events such as fairs, festivals, company picnics, Christmas parties, schools and libraries. Sometimes they do several shows in a single day.

The trick to booking hundreds of shows a year is trying not to turn down a show, Paul says. Sometimes that means fitting in three shows at different locations in a single day. Other times it might mean performing outside at the mercy of wind, rain or scorching summer heat. Inevitably, some shows are easier and more fun than others are.

“Schools and libraries are some of the most rewarding, as are the birthday parties for that matter,” David says.

Corporate events can be more challenging, but often lead to people booking birthday parties as a result. Game shows are relatively easy to host, but require hauling a lot of equipment, Paul says.

Most of the tricks don’t change from show to show and with such a polished performance, they can easily adjust their presentation style depending on the audience. But they do a lot of repeat business — one library hired them seven years in a row — so they occasionally work a new trick into the act, which helps keep them and the show fresh, Paul says.

They also keep abreast of what’s new in magic and who’s doing what on television, David says. Recently audiences have frequently mentioned Shin Lim, who won “America’s Got Talent” with his close-up card magic.

For Paul and David, who turned 59 in November, magic is a way of life. They have no plans to give it up anytime soon, but 250 shows a year can be a grueling pace. After decades of entertaining audiences, has it gotten tougher to keep up that pace?

“Well if you’d asked me that a couple years ago I would’ve said ‘Nope, no difference,’” Paul says. “But, yeah, it’s starting to catch up to me.”

Now they try not to schedule shows back to back so they don’t have to pack up and rush from one place to the next, Paul says. They’ve also looked for ways to lighten some of the equipment they use. They’re looking forward to being a bit more choosy about the kind of work they take, David says, such as shows that require them to be in the sun on hot summer days.

They say it’s only a matter of time before they start doing shows at birthday parties for the grandchildren of people they’ve performed for. And that’s fine, they say, because they still love what they do.

“It’s the one gift that I have to give and I’m glad to be able to offer it,” David says.