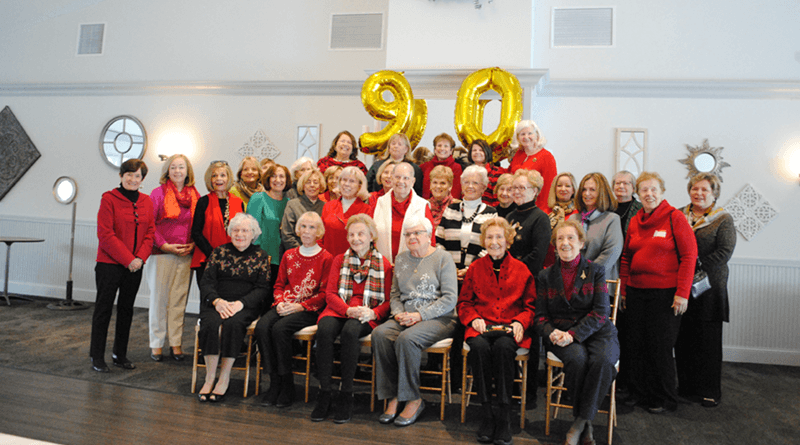 It was 1928, and a group of Syracuse women intent on learning more about the world around them decided to gather together once a month, from October to April, to discuss books they’ve read, invite in guest speakers, and talk about topics of the day.

They would need to break from their meetings from May to September since many of them played golf.

The women would take turns holding these gatherings in their homes. The hostess would prepare a luncheon or have it catered at her home, and the silver tea service would be brought out for the occasion. There were tea and coffee pourers at either end of the table. They would come to be known as the Tuesday Book Club.

Who among them could have imagined that nine decades later their tradition would continue, that the group, most likely the oldest book club in this area, would mark its 90th anniversary earlier this winter?

“We were just housewives. We were thrilled to get dressed up and go out. We had a good afternoon, we had good speakers, we read books and we exchanged our notes on them. And this was our big outing,” said Barbara Bickford, one of the longest-standing members who joined in the mid-1950s.

Bickford was invited to join by a friend of hers, Ann Mawhinney Hodgkins, whose mother, Antoinette Mawhinney, was one of the original founders of the group.

Barbara Obold, a member for about 49 years, joined the club to put a little bit of culture in her life, she said.

A few things have changed since then. There are no longer tea services, and instead of meeting in each other’s homes, they now gather at the Traditions At The Links on North Burdick Street in East Syracuse. It is an aptly named venue for this group that has retained many of the ways of the women who first gathered.

Judy Plumley, one of two co-chairwomen of the club’s program committee and one of its newest members, said she is in awe when reflecting back on those founding members.

“They weren’t wallflowers,” she noted. Putting that timeframe in perspective, Plumley pointed out that in 1928, these women weren’t working outside of the home. They had just won the right to vote eight years prior, and the stock market crash that led to the Great Depression was just months away.

It’s the guest speakers that really draw members’ interest, according to Plumley.

“We reach out to people not only to speak to us, but it’s our intention to find out about their story,” Plumley said. To learn about them enriches members, she noted.

The drama tells the story of Harriet Powell, a slave who seeks freedom and finds a temporary safe haven in the attic of Gerrit Smith, an abolitionist from the Central New York area.

Powell comes to know Smith’s cousin and activist, Elizabeth Cady, and their meeting brings about a period of self-examination for Powell.

To hear about Bass, his background, the Underground Railroad, and region’s connection to that abolitionist movement made it very personal, Plumley said.

One guest author that left an impression on Sally Hall, a 30-year member, was Donna Wollfork Cross, author of the novel “Pope Joan.”

While Cross was a professor at Onondaga Community College, it was suggested that Hall invite her to attend one of the club’s meetings. The author discussed her extensive research, which included a journey to Germany. Club members were captivated, Hall said. About 10 years later, after the book had been made into a film, Cross returned to the club and discussed the ins-and-outs of that process.

On the occasion of its 90th anniversary, the club, with Barbara Massey as its president, partnered with another of their speakers, Debbie Stack, senior director of education and community engagement at WCNY Public Broadcasting. From Stack’s discussion about the lack of books among the underserved youth in Syracuse, the 36 members were inspired to collect and donate books to these young people.

The members range in age from the 50s to the 90s, and it’s that age range that Plumley and Obold said they’ve come to appreciate in the group.

Obold mentioned that at meetings, members sit at tables in one of Tradition’s banquet rooms. The members are sometimes assigned seats to mix things up. She likes the opportunity that presents to get to know more of the women.

“You make all new friends,” Plumley said. “What were the odds that I would ever meet these ladies otherwise, and what a joy it’s been?”