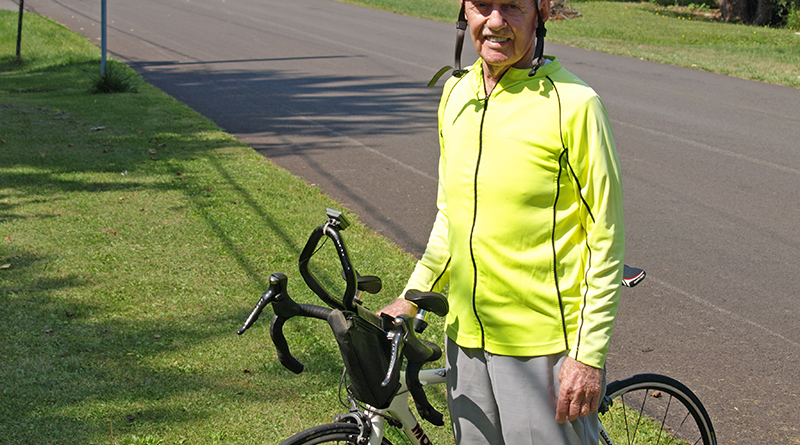 East Syracusan did the 62-mile bike trip around Oneida Lake this summer. At 89, he wants to do it again

Larry Harrison is an 89-year-old Central New Yorker who has cycled the 62 miles around Oneida Lake before and he plans on doing it again. The East Syracuse resident recently had a knee replacement, but he said he is well on his way to recovery with plans to tackle the lake again when the weather warms up.

What makes him do it?

“Just ‘cause it’s there,” he said. “I was looking for a little longer ride in the summer time. It’s a challenge. I do it with other people, mostly younger. There were 17 last time. It’s a nice ride.”

Harrison is a long-time member of the Onondaga Ski Club. His history with bicycles goes back much farther though, and from the beginning it was one of taking on adversity.

“My brother is 10 years older than I am,” he said. “He had a bike. When I was probably about 7 years old I tried to ride it.  I wasn’t big enough to get on it. I’d go a little ways and fall, go a little ways and fall. I finally got so I could ride it. I couldn’t sit on the seat and reach the pedals, but standing up I could. The bike was way too big for me. It was a challenge and I was able to do it.”

A common thread of Harrison’s life has been to take on athletic challenges. When he was a boy growing up in Binghamton he encountered the Susquehanna River with his bike, which was about a mile from his house. To Harrison it was just another challenge.

“The nearest bridge was quite a ways downtown,” he said. “I wanted to go to the other side for some reason. I biked into the river.”

Long story short, he made it across with quite a bit of effort, he said.

Family members younger than him marvel at his appetite for the outdoors.

“This guy is the most athletic guy you’ve ever met,” said his grandson Jason, 44. “He goes skiing, biking, windsurfing, sailing. He’s the only reason I do half the stuff I do athletically. He got me into running, sailing, tennis, windsurfing, motorcycling, kayaking, canoeing. He’s the reason I go outside right now.”

Harrison lives with Jason and his family six months of the year, when he’s not in Florida. Jason recalled calling his grandfather from work and making outdoor plans for the weekend.

The older man was an engineer for many years before retiring. He used to jog but aging changed his choice of sports.

“Once I retired my knees got sore” he said. “My ankles got sore, so I gave up jogging and took up cycling. It’s an easy way of getting exercise. It doesn’t hurt the joints.”

Harrison had a word of caution for older folks thinking of taking up cycling. Be careful and approach the bicycle with confidence. And be aware of the risks. Harrison has done a face plant a few times and gotten banged up pretty good, he said.

“One of the group rides where we have a destination we used to go to Kingston, Ontario, right across from Wolf Island, he said. “That was a nice ride. Unfortunately that’s where my last accident happened I got attacked by a dog. The damn dog came out and tangled with my front wheel. I went down, lost my teeth.”

Harrison had some simple advice for staying active as you get older.