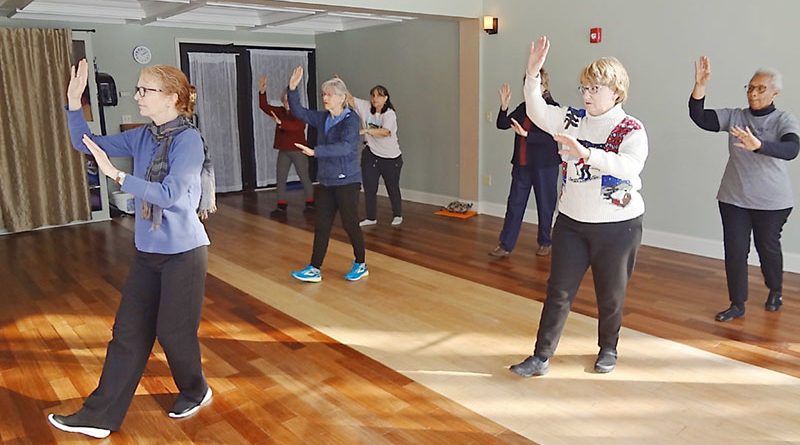 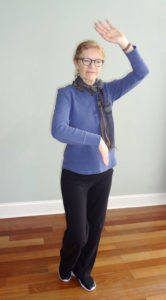 When many of us think of exercise, activities that come to mind are usually walking, bicycling, running and swimming.

For Genoa Wilson, exercise is “waving hands in the clouds” and “pushing the mountain.” These are names of movements in tai chi, a Chinese martial arts practice in which participants engage in slow, graceful movements that enhance physical flexibility and mindfulness.

As an area tai chi instructor for 14 years, Syracuse resident Wilson has been guiding her students through a modified style of tai chi for people with arthritis, a style that allows participants to work within individual limitations and go easy on their joints.

In a typical class, which takes place at several Onondaga County locations, adults in comfortable street clothing and rubber-soled shoes pad lightly along the floor in unison with Wilson. “Slow, continuous, flowing,” she will remind them, asking them to pretend they are moving through deep water or wet sand. There are no sudden jarring movements here.

In quiet concentration, each person will extend an arm, point a toe, and bend a knee. They become “white cranes flashing wings,” or “higher horses.” In a more energetic moment, they may “repulse monkeys.” Even the martial arts aspects of the positions, like “parry and punch” or “block and close,” are executed with a restrained deliberateness.

That Wilson has many students who have been regulars for years, as well as many new students eager to find out what tai chi is all about, is a testimony to not only the practice itself, but also to Genoa’s easy-going and humble approach.

“Do the best you can,” she will say to new students, “and if you mess up, guess who’s coming after you? Nobody!” Or, she will place a new student in the middle of the room to have a better vantage point to the more experienced students and she will say, “Now you’ll have somebody in every direction who is just as qualified to lead you astray as I am.”

The words “patient,” “caring,” and “supportive” come up frequently when students are asked to describe Wilson. Joan Supiro, a participant for over five years, appreciates Wilson’s humor and openness, adding, “There is a reciprocal sense of appreciation here that moves from Genoa to the students and back.”

Wilson’s one-hour arthritis classes practice a 42-movement series that is adapted from the 73-movement Sun style. She also teaches the full 73-movement Sun style to her advanced classes. Wilson astutely facilitates learning by taking movements apart, so that students spend time mastering a particular challenge — the footwork in one form, the wrist and palm motion in another. As Wilson explains, “It’s like learning a language and over time you become conversant with that language.”

Eventually, participants put all the parts together in a longer reverie of movement. “Every time we do something,“ Wilson remarks, “we lay down layers like silt in a river.”

Wilson is a serious writer of poetry and participates in the Syracuse Downtown Writers’ Center select workshop limited to experienced poets preparing works for publication. So it is no surprise that she brings her poetic sensibilities to tai chi, relating the movements of the body to the language of poetry as well as an attunement to nature.

“Doing tai chi is like being part of nature,” she says. “Like the ripple on water or the movement of leaves and grasses.”

At the end of each class, she quietly narrates her cool-downs by asking participants to relax like a tall blade of grass swaying in the breeze or to stretch “like the biggest starfish.”

Donna D’Eredita, who has been in the class for three years, says that such connections help her to internalize the movements of tai chi.

“What I love the most,” she says, “is how she can put some kind of fluid visualization in her descriptions. I’m very visual, so it helps me.”

While the movements of tai chi are indeed graceful and fluid, they are also precise, so Wilson adds a dose of the practical to the precision.

For instance, she will ask people to think about how one position’s curve of the arm and slight bending of the elbow should feel like tenderly holding a baby. Or she will describe a motion where palms are flattened, one on top of the other, and then twisted slowly to reverse them: “You have flattened pie dough in your hands and you’re flipping it around.”

By bringing precision and practice down to earth, Wilson can conversely take her students to a higher level.

“Movement is both powerful and sacred,” she reflects. “There’s an intuitive aspect to it.”

Originally from Eugene, Oregon, Wilson was a dancer with the Eugene Ballet when she was just 18. She also did choreography and acting for the Oregon Shakespeare Company for two seasons, working on the productions of “Measure for Measure” and “A Midsummer’s Night Dream.”

After a move to Albuquerque, New Mexico, where she continued in another dance company, she found a day job that helped define the path she’s pursued ever since — a position in the office of senior affairs.

There, she adapted her interests in movement and the arts to seniors, organizing events like the Senior Olympics and a senior talent show.

“The dance thing plus work with seniors was a natural progression for me,” Wilson says. When she moved with her husband and two sons to Syracuse, she became the program coordinator for the Arthritis Foundation, which covers 13 counties. While no longer the coordinator, the programs are obviously dear to her heart.

Wilson became fascinated with the martial arts when one of her sons started taking kung fu as a child, and she noticed the tai chi classes in the next studio over.

Although at the time, she remained a fascinated observer because the demands of raising a family precluded any extra activities. She eventually took the certification course to become a teacher of “Tai Chi for Arthritis” and has been teaching it in the Syracuse area for 14 years.

Her first class was in the Manlius Senior Center in 2007. Currently, Wilson teaches at least eight classes a week, depending on the season or semester, and holds classes at the Manlius YMCA, the East Area YMCA in Fayetteville, Manlius Senior Center, the Jewish Community Center of Syracuse, and Upstate Medical University’s Healthlink. Additionally, through Title III D federal funding of the Older Americans Act, that Upstate Oasis receives, she is also able to offer classes throughout Onondaga County, most recently at Syracuse’s South Side Innovation Center and the Westcott Community Center.

It is no surprise that Wilson is a proponent for the practical benefits of tai chi for the body and for mental wellness.

She follows the principles of Paul Lam, a world-renowned physician whose book “Tai Chi for Arthritis and Fall Prevention Handbook” is an essential reference for her.

Overall, the slowness of the movements without sudden jarring or pounding helps to protect joints while the stretching helps strengthen the muscles around the joints.

Dean Harrer, who joined the class six months ago, appreciates that opportunity “to lengthen, strengthen, and balance,” he said.

Wilson reinforces that in all of her classes “you develop awareness of the balancing challenges and how to meet them,” she says. The almost stealthy creep in the footwork engages the ankles, which over time can develop better ankle strength for balance. Just as the movements are slow, the breathing is slow, which initiates the relaxation response.

“We don’t always realize we’re holding our breath during the day!” Wilson exclaims, emphasizing that breathing long and deep is both mentally and physically good for people.

Six years ago, Joseph Coppola was recovering from spinal surgery and began looking for “something I would enjoy and stick to,” he said.

Since then, he’s been faithfully attending Wilson’s intermediate-advanced class on Wednesday morning at the Manlius Senior Center.

“I regained my strength,” he says, “and noticed other benefits — my lung capacity increased, minor back pain disappeared, and my flexibility improved.”

Wilson herself felt she bounced back sooner when recovering from knee surgery a few years ago, because she had maintained good muscle strength through tai chi.

The mental benefits are also apparent. Loretta Graceffo, who’s been taking tai chi for over five years, believes tai chi is good for her memory. Movements are learned in a sequence, and interestingly, the right side and left side body movements are not always symmetrical. Students in class can occasionally be heard remarking that such non-intuitive changes are good challenges for the brain.

“It makes me think about what I’m doing,” says Georgiana Norton.

From the start, the best benefit is one that requires no practice — relaxation. Wilson’s students would certainly agree with her when she says her one-hour class is a like a “mini-vacation.”

No matter what the practice room looks like — old or new, windows or not, dim lights or bright — the rest of the world drops away as Wilson plays a recording of wispy flute music in the background and asks students to warm up and to open up, gradually re-awakening their joints by rolling their shoulders, circling their thumbs, or simply contemplating the curve of their palms as they bend their elbows.

The mental absorption in a simple movement wipes away the day’s obligations, and for an hour, a person’s to-do list consists of only “playing the lute” with palms outstretched, or “leisurely trying on a coat” by raising an imaginary billowy sleeve. And as always, with Wilson’s mantra, “slow, continuous, flowing.”