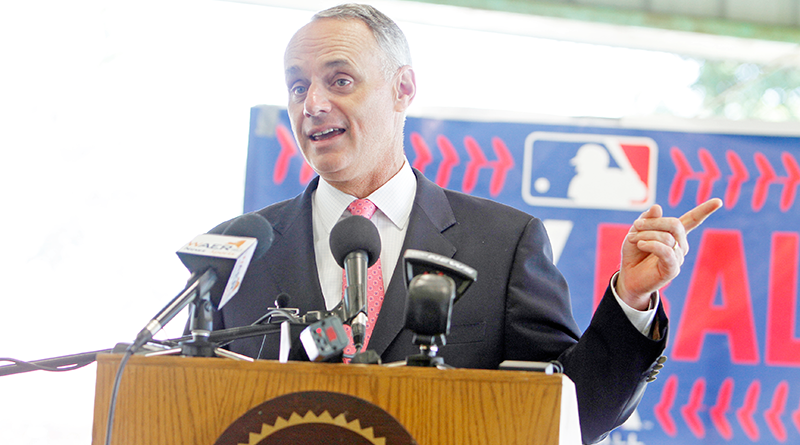 So, what are the chances that a man born 50 miles down the road in Rome, N.Y., a tennis player in high school and LeMoyne College, and holder of degrees from Cornell University and Harvard Law would become the commissioner of baseball?

In 1987, after a career as a lawyer in the private sector, Manfred began working with Major League Baseball (MLB) in collective bargaining. During the 1994–95 MLB strike, he served as outside counsel for the owners. He joined MLB on a full-time basis in 1998, serving as the executive vice president of economics and league affairs. He negotiated MLB’s first drug testing agreement with the Major League Baseball Players Association in 2002, and represented MLB in negotiations with the MLBPA in 2002, 2006 and 2011. In 2013, he was appointed MLB’s CEO, and led the investigation of the Biogenesis scandal.

In 2014, he was elected the 10th commissioner of baseball.

He came to Burnet Park in Syracuse June 3 to help kick off Play Ball Summer in support of the Play Ball and RBI (Reviving Baseball in the Inner City) programs supported by MLB. He emphasized his (and MLB’s) commitment to cities like Syracuse to help make baseball and softball a more vital part of the athletic opportunity for youngsters.

“I have spent the last 18 months or so traveling around the United States telling people I have the best job in the world, and the best part of this job is when I get to spend a day like today, watching kids get to interact with our game. That reminds me how special this game really is.”

There is no question that Manfred understands the relationship of baseball to America and his role in that relationship.

“When I became commissioner I thought it was important to put an emphasis on young people playing our game. I think it’s important to the future of our game, and I think it’s also important to our society, our culture, because baseball is uniquely American. That’s why people care so deeply about our sport. I feel that of all the obligations I have to the game, the greatest single one is that the game is passed down to the next generation the same way it was passed on to us.”

Manfred is a genuinely friendly man, well spoken, and definitely interested in promoting the programs designed to promote inner city baseball in urban centers like Syracuse.

“One of the things we realized when we started to think about participation in youth baseball is that most of us, in our 40s and 50s, that are running the game, didn’t really think about organized play when we were kids. We thought about those games you would make up when you only had a few kids to play. Events like today make kids realize that they can engage in our game without all those formalities.”

Following brief words to the media, he spent a considerable amount of time chatting with the youngsters, mostly Syracuse middle schoolers, who were participating in on-field skill clinics. He was in no hurry to leave and chatted amiably with students, teachers and fans that approached him. If the kids hung back at first, he approached them, and involved them in conversation that usually began “Hi, I’m Rob, what’s your name?” and eagerly spent time autographing the MLB provided PLAY BALL tee shirts they wore.

When I told him that I was a little disappointed that he had been a high school and college tennis player which deprived me of the chance to say I had umpired games in which the future MLB commissioner had played, he said that “The fact is, I wasn’t very good. I was probably the worst little leaguer of all time. I was reasonably athletic, but baseball was not easy for me. However, it was a formative experience for me. I have had a special bond with the game; it taught me values like teamwork and persistence that have stayed with me my entire life.”

And when I said I did have one big question for him, I could see the resigned expectation on his face that it would be about Pete Rose, or steroid suspensions or labor problems, or any of the other repetitive and, I’m sure, sometimes irritating questions he is asked. When the question turned out to be whether or not he had played the highly popular baseball board game, Strat-O-Matic Baseball, when he was young, his response, with a big smile, was “What kid didn’t play Strat-O-Matic? I wish I still had the time.”

Of course I do care what he does about Pete Rose and steroid suspensions and labor problems and all the other things that need tending, but mostly, I care that he seems to be genuinely interested in kids having the chance to play and enjoy baseball and softball, and that it’s too bad he doesn’t have enough time to play Strat-O-Matic.