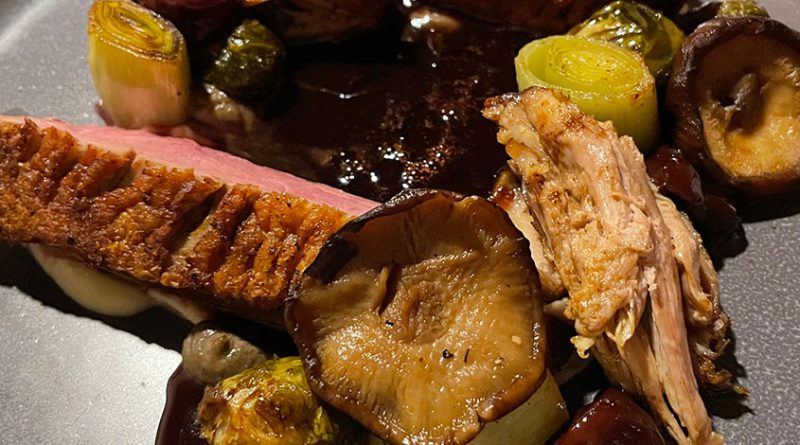 Fine is emphasized at Brick-N-Barrel in Baldwinsville

There’s a restaurant sitting on the Seneca River that’s familiar to everyone who has been in the village of Baldwinsville.

The space went through different owners, had a few names — The Chef & The Cook, for one. Now, Brick-N-Barrel, which opened last year in the midst of the pandemic, is occupying the exposed brick-walled, elegant space.

Because of the exposed brick, there’s no need to decorate too much. It’s warm and cozy but not in the small and tight sense — feeling comfortable is important.

Speaking of minimalistic approaches: The farm-to-table focused restaurant has an eclectic menu of delectable items. Although a smaller menu, the offerings yield tough decisions.

My foodie cohort and I kicked the meal off with fish tacos ($20), pork belly ($16) and the Nashville hot calamari ($18) as first courses.

The latter was surprising. I don’t recall ever getting such a quantity of fried squid from any place. Although it was a pleasant surprise, it felt inconsistent (price to quantity) with the dishes that would follow.

The calamari boasted that southern balance of sweet and heat. Even though the basket of fried squid was 100% rings — show us those tentacles! — the creeping spiciness was delicious.

We tried to restrain from continuing to eat these, because there was a fear it might interfere with eating what was to come. However, picking at them throughout the meal was inevitable.

The tempura-coated sole fish tacos were crispy and flavorful; it never showcased a fishy flavor. Sole is a pricier white fish, so the price of two tacos, which equated to $10 each, may be a deterrent.

Still, this is a worthy choice for fans of fish and fresh ingredients — a hint of mint chutney, kumquat puree and avocado yogurt combine for a bright flavor profile.

Can you go wrong with smoked pork belly? No. Brick-N-Barrel proves this. The savory, small brick of pork belly sits in a puddle of sweet cider jus and is surrounded by shards of shiitake mushrooms, a halved shallot, and tiny brussels sprouts. The rough looking fatty cut of meat was easily halved, shared and savored.

The creole shrimp macaroni and cheese ($28) was noteworthy for reasons, some better than others. Unfortunately, the size of the cast iron skillet it’s served in is small; such a price tag for a mac-n-cheese meal is a bit duplicitous. If this was packed with shrimp — the pieces were actually difficult to identify — it could meet that price point. However, the incredibly smoky entrée didn’t match up for me. There were plenty of positives, though. The hearty dish was not watery or soupy, it was delightfully rich and cheesy (oh, that lovely smoked cheddar), and the creole buttered bread crumbs were a perfect topping.

The seared duck ($38) was propositioned to us. Because of this, the tough decisions were easy. How could a person deny the duck if it was that good? The duck was, in fact, seared perfectly. It was tender, flavorful, and everything you would want from enjoying such a fowl.

The other ingredients, the cranberries and vegetables particularly, ranged from cool to cold. I’m not sure if this was intentional, but there was anticipation that the other components of the dish would have been around the same temperature. Biting into a cold cranberry after eating a warm piece of duck was unexpected. Still, regardless of temperature, the flavor wasn’t affected.

With the addition of four beers, the total meal came to $159 and change. To me, this is a little on the pricier side for casual-upscale restaurants. For the portions and type of food, especially the shrimp mac-n-cheese and fish tacos, it was definitely on the pricier side. But note the food was far from terrible. However, for a nice evening out — we all deserve one — Brick-N-Barrel is absolutely worthwhile.