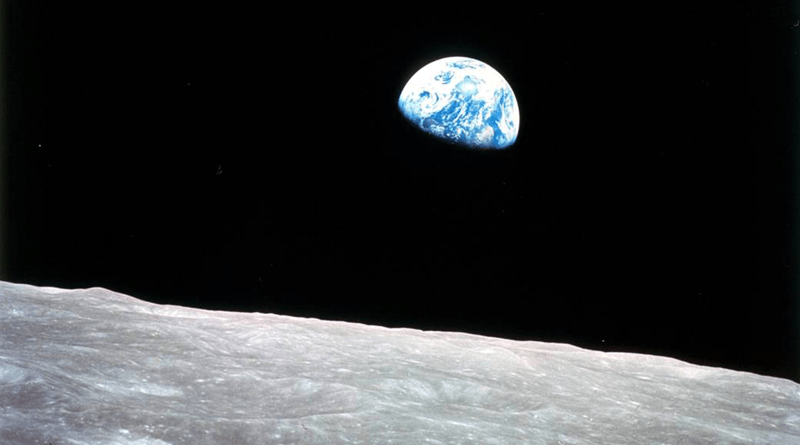 Like so many children in the 1960s, Syracuse resident John Mariani grew up spellbound by America’s first adventurous forays into manned spaceflight.

“Some of my earliest memories revolve around the space program,” he says.

Mariani remembers Alan Shepherd and John Glenn’s Mercury spaceflights, and knew the names of nearly every Apollo astronaut by heart. But perhaps his favorite memory of America’s space program came when he was 11 years old.

On Christmas Eve 1968, he joined millions around the globe watching images beamed back from the crew of Apollo 8 as they circled the moon, the first humans to travel to another world.

The moment capped one of the most turbulent years in American history. The Vietnam war dragged on with no end in sight even as protests at grew. In April 1968, Martin Luther King Jr. was assassinated, sparking riots. That summer saw the assassination of Robert F. Kennedy and rioting outside the Democratic National Convention in Chicago. Even America’s space program seemed in danger of foundering.

“There was a lot of tension associated with the flight, if you were paying attention anyway,” Mariani says. “There was no way to bring them back if anything went wrong.”

President John Kennedy’s vision to land on the moon before the end of the decade was dealt a crippling blow in January 1967 when fire ripped through the Apollo 1 spacecraft during a test, killing all three astronauts. Now delays in building the lunar module threatened to slow things further. NASA’s solution was to push back the lunar module flight and send Apollo 8 on the first journey to the moon.

Robert Baker, of Jamesville, was 14 at the time. He’d followed America’s progress toward a moon shot since the second grade when he and his classmates listened to radio coverage as Alan Shepherd became the first American in space.

“When there was a launch, all the stations covered it,” he says. “You’d watch these things go up and it was so cool.”

Baker says Apollo 8 stands out in his memory from all the previous flights — there had been 17 missions up to that point — because it was seemingly so close to the goal of landing on the moon.

Three days after liftoff, Apollo 8 prepared to enter lunar orbit. To accomplish this, the spacecraft’s engine had to fire at precisely the right time, on the far side of the moon and out of contact with Earth. The four-minute burn went perfectly and the crew began the first of 10 orbits.

The crew made six broadcasts during the mission: two going to the moon, two from lunar orbit and two on the return trip. As the spacecraft skimmed 60 miles above ancient lunar craters and rugged mountains, the images they broadcast were seen by millions.

Owen Graham O’Neill was 12 years old and living in Syracuse. At the time, he and his family were visiting relatives in California. They all watched together.

“I remember seeing grainy black and white footage where you could see the image of the moon and the moon’s surface when they were flying over it,” he says. “That was pretty remarkable.”

O’Neill was fascinated by the images of the astronauts floating inside their spacecraft. But he says it was the spirit and the feeling of the event he remembers more than anything. Those kinds of moments have become far less common over time, O’Neill says.

“That was a shared experience that I think people who are a lot younger no longer tend to have,” he says. “That whole thing of friends and family gathering and watching a significant news event while it was happening or the coverage while it was unfolding.”

Mariani lived in Syracuse at the time and was looking forward to the broadcast. But the Hong Kong flu had swept across the U.S. and started going around Syracuse in late December. It got so bad that school closed a day early for the start of Christmas vacation, Mariani says. Though he hadn’t been sick, Mariani finally came down with the flu right before Christmas.

“I was sicker than a dog, but there is no way I would have missed that broadcast,” he says.

With millions of families together on Christmas Eve, the crew began the second, and best-remembered broadcast around 9:30 p.m. During the 30-minute show, viewers glimpsed images of a bright moon and pitch-black sky outside the spacecraft window. The astronauts took turns describing the sight.

Mariani was coughing uncontrollably, but joined his parents and sister on the couch in the family’s TV room. For him, one of the biggest attractions was the prospect of being able to see the moon up close, but he was also looking forward to seeing pictures beamed back of Earth.

“Certainly, as a child I expected something like the Universal Pictures logo with the globe out in space and not a cloud,” Mariani says, laughing. “And to see the Earth swathed in clouds and blue ocean and barely discernable land, it really brought it into perspective. For the first time this was really one world.”

As the broadcast concluded, the crew took turns reading the first 10 lines of the Book of Genesis.

Frank Hammon was watching that night. He was 16 and lived with his parents on the North Side of Syracuse in a flat above his grandparents. He had been fascinated with spaceflight and built and painted models of the early rockets that carried astronauts into space.

On Christmas Eve, most of Hammon’s family was downstairs, but he stayed upstairs to watch the broadcast.

“I remember them reading from the Book of Genesis and the video that they were showing from the window with the Earthrise,” he says. “The words were so fitting for that moment. It’s one of those moments that sticks in your mind.”

Baker also spent part of that Christmas Eve watching the broadcast with his parents and sister in the family’s TV room.

“We sat around and were mesmerized,” he says. “The idea that man could be orbiting the moon, it was jaw-dropping to my parents and me.”

The crew of Apollo 8 safely splashed down in the Pacific Ocean three days later. The first manned lunar landing, made by Apollo 11, was still seven months away.