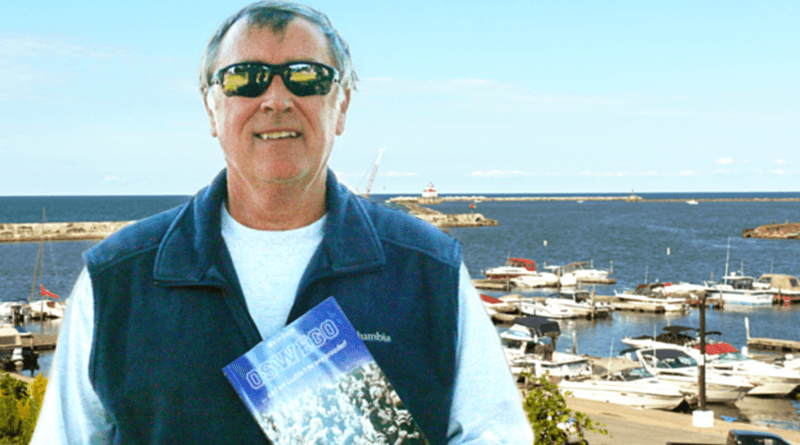 ‘We’re from Oswego … and we couldn’t be any prouder!’ is the second book by Mike McCrobie

As the great philosopher Yogi Berra once said, “The future ain’t what it used to be.”

And you know, maybe neither is the present.

Local author Mike McCrobie might not exactly put it that way — he doesn’t like to preach — but his first collection of bi-weekly newspaper columns titled, “Our Oswego,” just might make you wish you were still 11 and the year was 1968.

In column after heartwarming column of innocent reminiscence, McCrobie takes us back to the Oswego of the ’60s, ’70s, and ’80s, a bygone era of sandlot baseball, go-carts and payphones, of the long-gone stores of Oswego’s pre-Walmart downtown, of adventurous crossings over the river’s railroad bridge, of Christmas present dreams and the Sears Wishbook, of first cars, of old friends, of sneaking a school-day listen to a World Series game, of memory upon memory of those golden wonder years.

That was McCrobie’s boyhood Oswego.

Some may think of such looks back as just a little too sweet and a little too microcosmic, but there’s no denying those days and these are distant cousins at best, and for McCrobie, they were beautiful. Written between 2012 and 2014, they are stories of a time Oswego’s baby boomers may look back on with a warm sigh and smile, but a time younger readers may not know what to make of. And he’s OK with that.

Once written, he sends each column to his children, all close to or in their 30s.

McCrobie, born in 1957, didn’t really think of himself as a writer, even after two years of publishing 50 columns. One day he received an email from an elderly woman.

“It’s fun to remember, especially at my age,” she wrote. “You ought to put these pieces into a book. I think people would buy it.”

“Up until that point, even though I was an English teacher, I never had any dream about writing the great American novel or publishing a book or anything like that, and I certainly didn’t have time when I was in the classroom,” he said. “I was too busy grading papers. I spent half my life with a red pen in my hand. So I thought about it, and I thought about it, and I talked to Jim Farfaglia, another local author who self-published a couple books before I did, and he was invaluable in terms of giving me direction and guidance because I had no idea where to start.

“Luckily, I didn’t have to start from page one because I had columns. At the time, I had maybe 50 columns already written. Forty-six of those became ‘Our Oswego.’”

And yet, he still didn’t consider himself a “writer.” He was an English teacher and a coach at Hannibal for three years and at Oswego High School for another 30, hired primarily to resurrect the high school newspaper, the Buccaneer Bulletin, a job he loved and remembers fondly.

“As a kid, I always read the back page of Sports Illustrated, the short essays by some of the best sports writers around, and I figured by the time I was 30, I’d be taking the back page of Sports Illustrated from one of those writers. But it didn’t happen, and somehow I found education, and I can’t imagine my life without spending 33 years in the classroom. I really can’t. I loved going to work every day.”

And then it happened. A woman taking his name at the county board of elections said, “Oh, Mike McCrobie, you’re the writer.”

“I was taken aback a little bit,” McCrobie remembered.  And he thought for the first time, “I guess I am” and realized that was the way people saw him now.

“I was always either Mr. McCrobie or coach or Mike’s [after whom the McCrobie Building is named] son. So, I was always his son growing up. So, hmm, writer, OK, I’ll put that in the obituary. I’ve been called worse.”

And he could have done worse. With Farfaglia’s help, he jumped into the world of self-publishing, choosing the on-demand printer CreateSpace for its tie-in to Amazon.com.

“Self-publishing is just a fantastic offshoot of the technology age we live in,” said McCrobie. “It doesn’t cost a lot of money. It doesn’t take a big initial investment.”

It’s certainly been a success. Since 2014, he’s sold 1,000 copies of “Our Oswego” through Amazon and Oswego’s river’s end bookstore. Only four out of 48 months since the book’s been on Amazon has he not sold a book, available only as a printed paperback. There is no Kindle version yet.

Now’s he’s done it again. Having written 100 more columns since “Our Oswego” came out, he put 60 of them into a new book titled, “We’re from Oswego … and we couldn’t be any prouder!” referencing Oswego High School’s old cheer:

“We’re from Oswego;
We couldn’t be any prouder.
And if you can’t hear us,
We’ll yell a little louder.”

The cover is a 1976 photo of that year’s OHS seniors standing in the bleachers and clapping at a pep rally.

“That way, if they don’t like the stories, people in the class of ’76 can at least play ‘Where’s Waldo?’ or ‘Where Am I in That Picture?’ because the faces are clearly recognizable,” he noted.

The printed version of the new book is available on Amazon.com, and for this one, he also intends to create a Kindle version as he steps a bit further into the present, though not so far as to actually write on a computer.

“I still write longhand. I don’t compose at a keyboard. I have a shelf of composition notebooks, the old marble composition notebooks. I probably have 12 or 13 of those full at this point. Typing it is my first stage of revision,” he said. “Right before I hit ‘send’ I read it one last time. They sometimes say your first idea or your first inclination might be your best. With the ideas, that’s true, but I want to make sure the semicolons are in the right place.”

Pretty much everything seems to be in the right place now for McCrobie. His second book, with a forward by former Syracuse Post-Standard columnist Sean Kirst, debuted in November at Oswego’s river’s end bookstore.

McCrobie’s first book also debuted there, and he truly appreciates what the river’s end bookstore’s owner, Bill Reilly, has done for local authors.

“I can’t give Bill Reilly enough credit for what he does, not just for local writers, but just for local readers. In this day and age to have a small, independent bookstore in Oswego, New York, thriving is just a testament to the kind of businessman he is,” he said.

“He’s great to us novice writers. I can’t tell you how helpful he’s been to all local authors; he gives us a forum,” McCrobie added.

“There are three words that bring a smile to the face of a baby boomer,” he writes. “My Weekly Reader.”