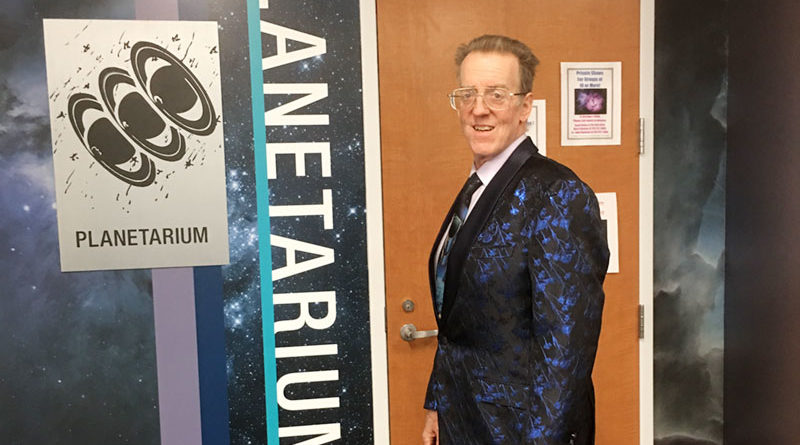 Q: Could you describe your work at the planetarium?

A: “I am the director of the planetarium, which means I am the one in charge of a lot of the shows and the programming, along with my two co-hosts, Richard Frieman and John Zielinski. It takes a lot of dedication to create a planetarium show, especially in the new digital age. We have the capacity to land directly on Mars and look at space from a Martian landscape, so even finding a topic can be a difficult task. For the public shows you have to keep whatever topic you have in mind fairly simple and straightforward. Classes allow you to stretch out a little bit and talk about more complex subject matter. We do shows on all types of topics, from the history of the depiction of space to the movements of star systems. Our shows change monthly, and we run a majority of the year, so we cover a lot.”

Q: What got you interested in the field of astrophysics and the study of space?

A: “I grew up during the space race, and when I was looking at what I wanted to do, my first thought was to be an astronaut. That wasn’t going to work out, and I knew that early on, so I focused on the science of it instead and I found a home there. I studied stars and their abundances, or the different concentrations of atomic isotopes in relation to one another, for a number of years in 1980s and 1990s. Since the mid-2000’s, I’ve been more and more involved in the planetarium, eventually taking over.”

Q: How has studying space and working in the planetarium changed your worldview?

A: “I don’t like to blow things out of proportion, I am just a normal person at the end of the day. However, when you spend your time studying things so far away, you truly realize the scale of the universe in relation to yourself, you see that you’re dust, anyone who may annoy me or get in my way is dust on the cosmic scale. It changes the context of how you see things, in a way.”

Q: How have things changed for your field in the last decade?

A: “Something that everyone is dealing with now is the increased digitization of planetariums and the massive amounts of potential that we now have with them. The old style of planetarium, that’s existed from the very start up to about the 1980s and 1990s as the mainstay, relied on levers, gears, stationary bulbs, projection spheres and was generally limited in capability. Now, with one incredibly powerful computer, a very high-powered projector and advanced software, you can recreate whatever landscape you can think up, and see the stars and the sky from an uncountable number of perspectives. It can be challenging, but it is very exciting.”

Q: What is your major focus, going forward, for yourself and the planetarium?

A: “I’m spending my time working on new shows with Frieman and Zielinski. That’s really what we focus on now, is new shows, training them to operate the system and build shows. We occasionally take students on to study the operation of the planetarium with us. I challenge myself to try and do one new thing in the planetarium software every show I build, because it is such a detailed and complex program. I’ve been working with the digital planetarium since Shineman opened in 2013, and I still haven’t gotten to everything.”

Photo: Scott Roby is a professor of astronomy at SUNY Oswego, and the director of the planetarium program housed in the Shineman Science Center on the Oswego campus.